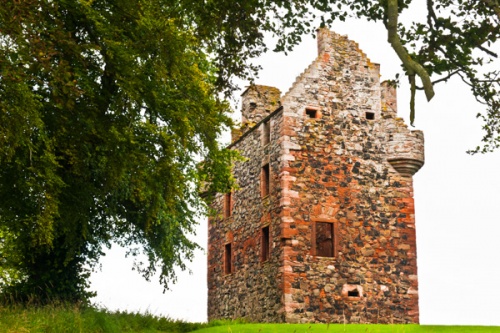 On a low hill just outside Gordon, in the Scottish Borders, stands the roofless ruin of a late 16th century fortified tower house. Greenknowe was built to an L-plan by Sir James Seton of Touch in 1581. The Seton arms, together with Sir James's initials and those of his wife, Jane Edmonstone, and the date, are carved on the lintel above the main tower entrance.

The Setons were Hereditary Armour Bearers to the Scottish king, and thus a quite important family. The land here was once owned by the Gordons, who gave their name to the nearby village, but the Setons acquired the land through marriage in the 15th century.

It was later the residence of Walter Pringle, a prominent leader of the Covenanters, and eventually passed to the Dalrymple family before coming under the protective wing of Historic Scotland. 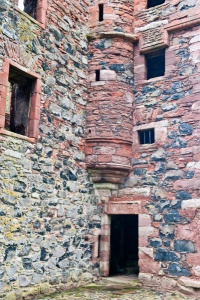 The entrance and
turret stair

Though it now stands alone on its hill, the tower originally stood as the centrepiece of a large enclosure, within a stone wall. Outbuildings associated with the tower were scavenged by local people for building stone after the tower fell into disuse in the late 19th century.

Greenknowe was built with defence in mind; the walls are perforated with numerous ruin-holes, allowing the defenders a clear line of site in any direction. The tower is four storeys high, with a main block and a smaller wing housing a stair from the kitchen on the ground floor to the hall on the first floor. There are three circular angle turrets rising from corbels at roof level.

Only one door gives access to the tower, another sign of how important defence was to Sir James. The door is in the re-entrant angle, where the two wings meet, and was defended by a solid wooden door in front of a yett, or iron grill.

The yett was designed to provide backup support to the door and to prevent attackers from simply burning the wooden door down to gain access to the interior. Think of it as a portcullis that isn't lowered, but rather is hinged like a door. The yett at Greenknowe is very well preserved (see Fyvie Castle for another).

The yett and gun-ports would not have provided enough defence on their own, but Greenknowe was sited on a hilltop surrounded by marshy ground, and the marsh probably provided a better defence than any wrought iron ever could!

Just inside the doorway is a turnpike stair, leading down to a vaulted kitchen with a large fireplace. The stair also leads up, to the hall, the main living area. From the hall a turret stair is corbelled out from the tower, leading to the upper chambers of both the main block and tower wing.

In all respects, this layout is typical of L-plan towers throughout Scotland at this period. In the hall fragments of the original wall plaster remain. Other features include ornate pilasters flanking the fireplace, and there are small closets built into the wall beside the kitchen flue. One of these closets may have housed a garderobe.

The tower is open at any reasonable time, but there are no on-site facilities. You can climb to the top of the tower and get very nice views both across the surrounding countryside and down into the interior of the tower. On a dismal day, Greenknowe seems bleak and forlorn, yet when the sun shines it is quite a pleasant place!

NB. There is no relation whatsoever between Greenknowe Tower and the series of children's books by Lucy Boston (for example, The Chimneys of Green Knowe). Boston lived in Cambridgeshire and modelled her literary Green Knowe on her own house of Hemingford Greys Manor. 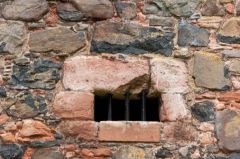 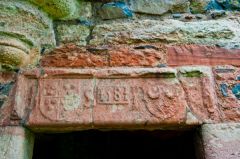 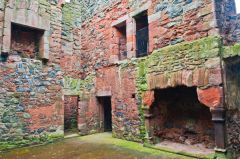 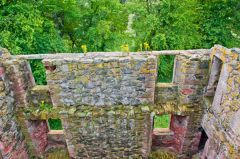 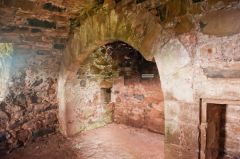 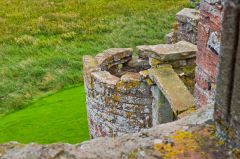 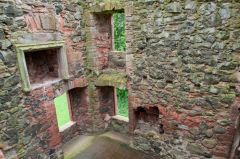 More self catering near Greenknowe Tower