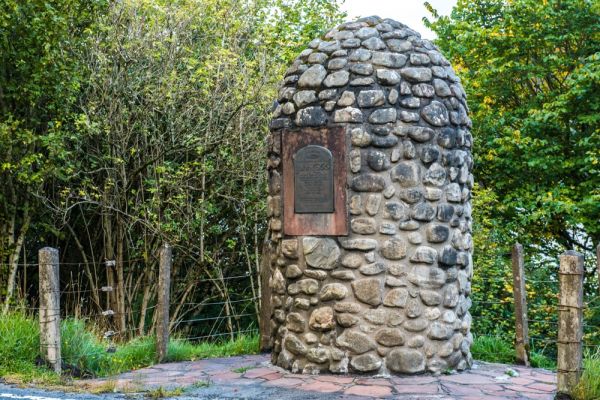 The A82 is the major transport route south from Inverness to Fort William at the opposite end of the Great Glen. Exactly 1 mile south of Urquhart Castle the A82 passes a beehive-shaped cairn by the side of the road overlooking Loch Ness. The cairn commemorates the tragic story of John Cobb, who lost his life while attempting to break the world speed record on Loch Ness on 29 September 1952.

Not content with holding the Land Speed Record, Cobb turned his attention to water. He spent some 15,000 designing a jet-propelled watercraft dubbed The Crusader and transporting it to Loch Ness.

Crusader was the first boat in the world to be built specifically for jet propulsion. It was 31 feet long and powered by a De Havilland Ghost 48 Mk1 engine. It was officially launched at Temple Pier, just north of Drumnadrochit on 26 August 1952. 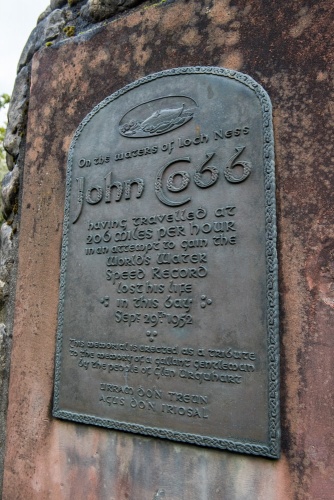 Cobb made his record attempt on 29 September 1952 over a measured mile from Urquhart Castle. According to the generally accepted rules of the time for speed records, two runs were required. On the first run, Crusader travelled at 206.89 mph, making Cobb the first man in history to reach 200 mph.

Tragedy struck on the second run, however, when Crusader hit a boat wake that should not have been there and nosedived suddenly into the depths of the loch, killing Cobb instantly. Believers in the Loch Ness monster would later claim that Nessie was in some way to blame for the accident. Cobb was buried at Christ Church in his birthplace of Esher, Surrey.

In 2001 the Loch Ness Project launched an attempt to discover the wreckage of Crusader, thought to lie over 200m below the surface. Over 18 months the research vessel Deepscan traversed the likely wreck location with sonar, mapping the loch floor.

One of the men assisting the search was Gordon Menzies, who as a child had witnessed the tragedy and as an adult owned Temple Pier where Crusader had first launched. At 3 pm on 5 July 2002, the remains of Crusader were found. They were left where they lay on the bottom of the loch. 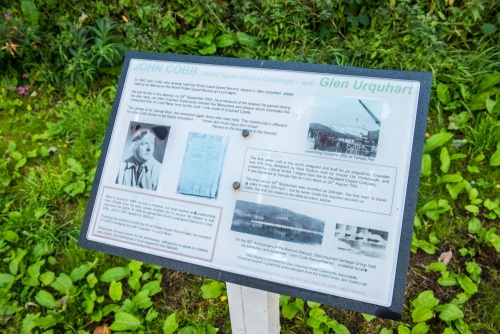 The memorial is in the shape of a traditional Highland cairn standing well above head height. This style of cairn was often used for memorials. You can see similar cairns at Culloden Battlefield near Inverness and at the Prince's Cairn on the Road to the Isles.

The Cobb Memorial cairn was designed by George Bain, a well-known Celtic artist and a resident of Glen Urquhart. It was paid for by the Glen Urquhart Community as a mark of their respect towards Cobb, who made many friends locally during his stay.

Beneath is a Gaelic inscription which reads 'Urram do'n truen agus do'n iriosal', or 'Honour to the brave and to the humble'. 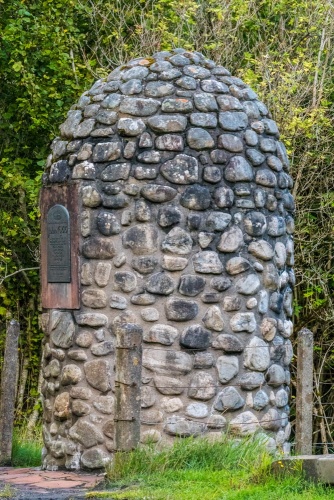 The memorial cairn from across the A82

The memorial is not signposted; indeed it is very easy to drive right past it without realising you've arrived. If you need help finding it, the memorial is at roughly OS NH517268 and is marked 'Mon' (Monument) on Ordnance Survey maps.

The northern end of the layby is almost directly opposite the memorial on the other side of the road. Please be aware that the A82 can be a very busy road and vehicles are often travelling at speed, so unless you really, really want a close look at the memorial you would be better advised to view it from the layby and to not cross the road at all.

There is a very handy information panel on the verge of the layby, erected by the Glen Urquhart Rural Community Association with support from Castrol and the Cobb family.

About John Cobb Memorial, Loch Ness
Address: A82, Drumnadrochit, Highlands, Scotland
Attraction Type: Historic Building - Landmark
Location: One mile south of Urquhart Castle on the east side of the A82. Layby directly opposite on the west side (heading north). There is no stopping place for southbound traffic.
Location map
OS: NH517268
Photo Credit: David Ross and Britain Express

Nearby accommodation is calculated 'as the crow flies' from John Cobb Memorial. 'Nearest' may involve a long drive up and down glens or, if you are near the coast, may include a ferry ride! Please check the property map to make sure the location is right for you.

Self Catering near Drumnadrochit