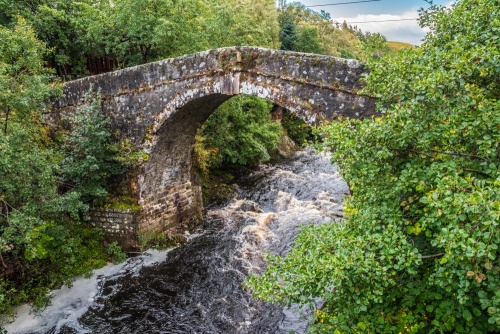 The Wade Bridge in Whitebridge

The Jacobite rebellion of 1715 briefly threatened the monarchy of George I. The Hanoverian king feared another Jacobite rising (with good reason, as history was to show 30 years later). In order to counter the possibility of another rebellion, the British government decided to build a network of roads and bridges to speed up troop movements throughout the Highlands.

The man put in charge of creating the new system of roads and bridges was General George Wade (1673-1748). From 1724-1740 General Wade served as Commander in Chief of the British army in North Britain, and during that time he built some 240 miles (402km) of military roads linked by over 40 bridges.

Many of Wade's military roads are still in service, including the modern A9.

Wade also built a road, later called the Great Glen Road, along the south shore of the loch, from Inverness to the Hanoverian barracks at Kilchumein, now Fort Augustus. Part of that road later became the B862. 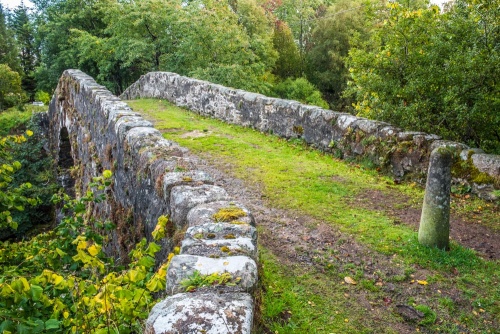 The southern end of the bridge

Between Fort Augustus and Foyers the military road crosses the River Fechlin at Whitebridge. Spanning the river is a single-span humpbacked bridge, designed by Major William Caulfield, who served as Roads Inspector under General Wade. It is this 'Wade Bridge' that gave the village its name. The bridge is roughly nine miles from Fort Augustus, which accounts for its alternate name '9-mile Bridge'.

The bridge is built of sandstone, with the abutments resting on bedrock. It spans a distance of about 40 feet. The abutments were later covered with stones and brick to protect them from the effects of floodwaters.

The bridge is quite markedly humped, probably to counter high water levels when the river is in spate. 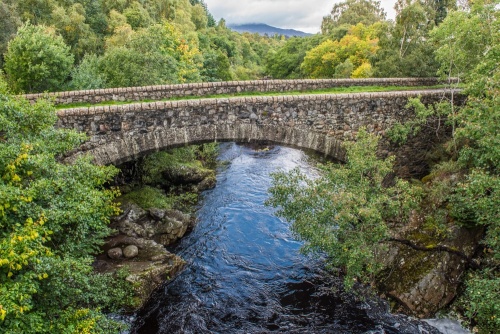 The 1932 road bridge from Wade's Bridge

It is fascinating to see the old and new bridges almost side by side, each representing a different solution to the same problem, using materials and engineering knowledge available at the time.

The Wade Bridge is listed Class A for its historical value.

As a side note, the bridge is a few steps away from the Whitebridge Hotel, which itself is linked to General Wade. To house workmen during construction Wade built encampments every ten miles. Inns sprang up to cater to the workers at the encampments, and these inns were dubbed Kingshouses. The Whitebridge Hotel stands on the site of a Kingshouse built to serve the workmen constructing the road, and very likely those skilled craftsmen working on the bridge. 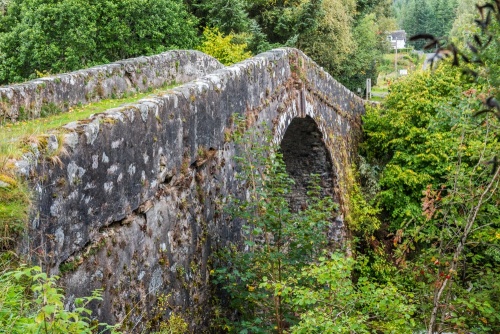 The bridge from the north

The Wade Bridge is easy to spot from either direction. It lies a few dozen feet east of the present road bridge. There is a layby and a bus stop on the opposite side of the road where it is easy to stop. Do be aware while crossing the road; it is not that busy, but cars do come through Whitebridge at full, legal road speeds.

There is a small plaque at one end of the Wade Bridge and you can walk across the bridge (though you then have to walk back to the same point again as there is no safe way around). If you are feeling energetic it is relatively easy to scramble down the bank to the base of the bridge where can get a very good look at the bridge construction.

The Whitebridge bridge is an excellent example of a single-arch Wade bridge, and one of the easiest to visit in the Highlands (even easier is General Wade's Bridge at Aberfeldy, further south in Perthshire).

Nearby accommodation is calculated 'as the crow flies' from Wade's Bridge. 'Nearest' may involve a long drive up and down glens or, if you are near the coast, may include a ferry ride! Please check the property map to make sure the location is right for you.

The Cross at Kingussie - 19 miles
Kingussie, Highlands and Islands
Stay from: £110.00

Self Catering near Whitebridge