HERITAGE HIGHLIGHTS:   The Royal Hotel stands on the site of an inn where Bonnie Prince Charlie bid farewell to Flora MacDonald 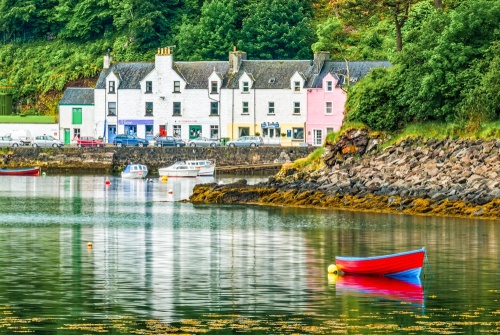 Portree is the largest town on Skye and acts as the island's capital. The town grew up around a narrow bay where three rivers empty into Loch Portree; the River Chracaig, River Leasgeary, and Varagill River.

The River Chracaig is separated from the other two rivers by a headland known locally as The Lump, topped by a Gothic folly called The Apothecary's Tower. The superb panoramic view from The Lump makes it a popular destination for visitors and locals alike.

The town centres on the picturesque harbour, ringed by brightly-painted stone cottages. The harbour is used by both pleasure boats and fishing boats. 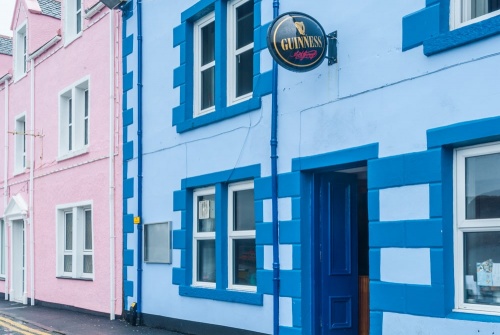 Colourful houses near the harbour

The town as we see it today dates from the early years of the 19th century, when Lord MacDonald developed it as a planned fishing village. There was a settlement here long before Lord MacDonald's scheme, however; archaeologists have found evidence of Bronze Auge roundhouses at Portree dating to 2570 BCE.

The Myth of the Name

The original name of Portree was traditionally said to be Ceilltarraglan, or Kiltaragleann, a Gaelic word that translates as 'the chapel at the bottom of the glen', or alternatively, 'the church of St Talarican'.

Tradition says that Ceilltarraglan was changed to Portree after a visit by King James V in 1540, who came here as part of his bid to assert royal authority over the western part of Scotland. According to this tale, the town name was changed to 'Port righ', or, 'the King's harbour' in honour of King James' visit. 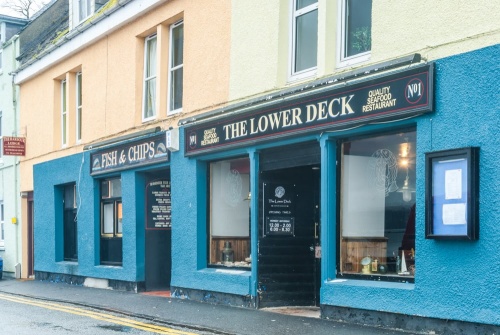 More colourfully-painted buildings by the harbour

Unfortunately for tradition, this story is not true; the town was known as Portree long before King James came to stay. The name may derive from the Gaelic words for 'slope harbour', or 'harbour on a slope'. That makes sense, for the harbour is set beneath several tall hills; Suidh Finn to the south and Ben Tianavaig to the west. The much smaller hill of Ben Chraicaig stands north of the harbour.

From the 18th century, Portree became a jumping-off point for Scots immigrating to the New World. Boats from the Scottish mainland stopped at Portree for supplies and to take on more passengers before sailing to America. This same pattern repeated in the 1840s during the devastating potato famine, when many Irish and Scottish families left their native lands for a fresh start in America. 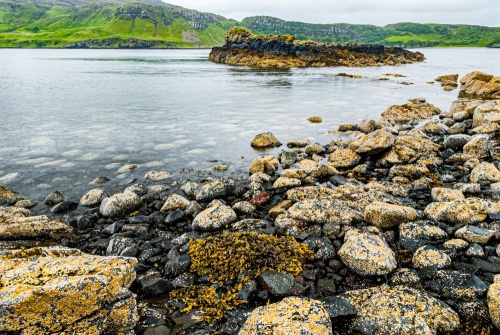 On the Scorrybreac headland trail

Perhaps the most important historic building in Portree is The Royal Hotel on Bank Street. The hotel stands on the site of a much older hostelry known as MacNabb's Inn. It was here in 1746 that Bonnie Prince Charlie and Flora MacDonald said goodbye for the last time. MacDonald had helped the fugitive prince escape to Skye from the Western isles, disguised as her maid.

At Portree the pair said goodbye and the Prince would eventually make his way to safety abroad. MacDonald, whose grave can be seen at Kilmuir, was arrested by the government and charged with treason, but eventually pardoned and released.

Portree boasts the best range of visitor facilities on Skye, with a bank, leisure centre, supermarkets, and a wide variety of accommodation. Just outside the town is the Aros Centre, a cultural heritage and shopping complex that promotes the island's Celtic heritage. 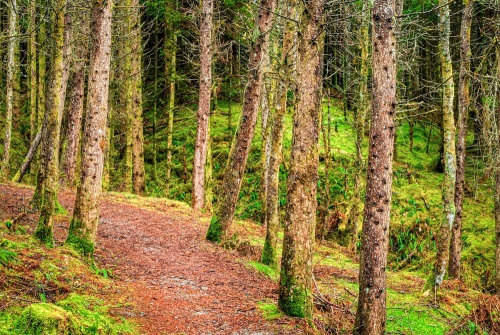 Immediately beside the Aros Centre on the A855 coastal road is Portree Forest, where footpaths lead beside a quiet burn, through peaceful woodland. The walk can be extended to create a 3-mile-long circular loop that leads past salt marshes on Loch Portree.

A less well-travelled but still very enjoyable walk takes you around the base of Ben Chracaig and the headland of Sgoire breac (Scorrybreac) before returning to Portree harbour. The walk starts at a small parking area on Scorrybreck Road, just below the Cuillin Hills Hotel.

The route takes in part of the traditional estates of Clan MacNeacail (MacNicol). A lookout bench stands near the spot where the clan chieftain helped Bonnie Prince Charlie escape Skye to the island of Raasay. 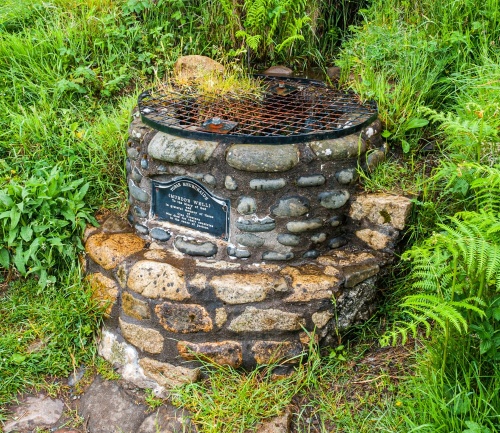 Beside the path is Murdo's Well (Tobar Mhurchaidh), built to honour those members of the clan who died in the two World Wars. The inscription reads, 'To the Glory of God and in grateful memory of those of Clan Nicolson who died for their countries in the cause of justice.'

The Clan Nicolson association with this area ended in 1826 when the clan chief sold the land and immigrated to Australia.

Portree is at the junction of the A87 and the A855. It is roughly 33 miles from the Skye Bridge, about 45 minutes of driving time in light traffic.

Portree is a good base for enjoying some of Skye's most popular natural wonders, including the Old Man of Storr, Kilt Rock, and The Quiraing, all of which are located just north of Portree on the stunning Trotternish Peninsula. It is also the departure point for several popular bus tours that offer full-day and half-day tours of Skye.

Nearby accommodation is calculated 'as the crow flies' from Portree. 'Nearest' may involve a long drive up and down glens or, if you are near the coast, may include a ferry ride! Please check the property map to make sure the location is right for you.

More self catering near Portree, Skye