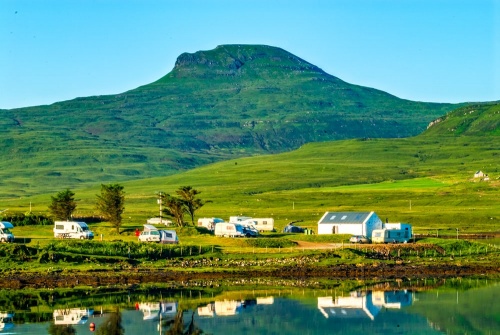 Dunvegan is a large village in the northern part of Skye, at the meeting point of the Waternish and Duirinish peninsulas. The name likely comes from the Old Gaelic Dun Bheagain, meaning 'fort of Beccan' (where Beccan is referring to a person's name).

Dunvegan grew up on the eastern shore of Loch Dunvegan, about 1 mile south of historic Dunvegan Castle. The village offers a wealth of visitor facilities including a hotel, camping site, and a large number of holiday cottages, in addition to a village shop, post office, and health-care centre.

One of the most notable buildings is the Dunvegan Parish Church, also known as the Duirinish Parish Church, a striking Gothic Revival building erected in 1832. The church retains its original 19th-century furnishings, including a gallery supported on neoclassical columns. The church is listed Category A by Historic Environment Scotland for its heritage value. 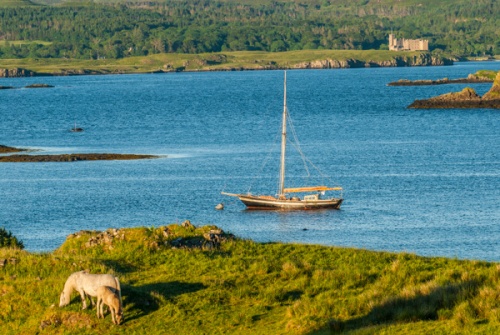 Loch Dunvegan with the castle beyond

Located directly beside the Dunvegan village hall is an attractive thatched building in traditional style, dedicated to the life of Angus MacAskill (1825-1863). MacAskill is recognised by the Guinness Book of World Records as the tallest non-pathological giant in world history, at 7'9" (2.36m).

The MacAskills were native to Skye, but left for Berneray, in the Western Isles, where Angus was born. The museum has replicas of MacAskill's bed, his chair, and table. The original items are on display at a museum in Englishtown, Nova Scotia, Canada, where MacAskill died.

The museum is open seasonally, from Easter through October. 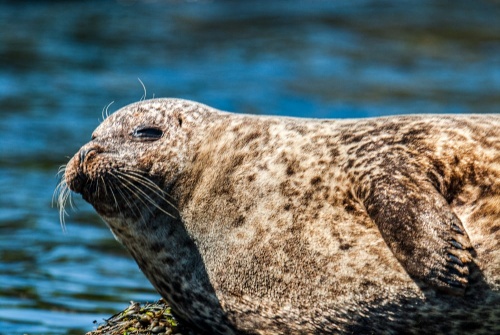 Loch Dunvegan is known for its resident seal herds, and visitors can get a close-up view of the seals sunning themselves on the rocks by taking one of the regular boat trips that leave from the pier at Dunvegan Castle.

Be aware that trips may be cancelled if the waves on the loch are too high. It is always a good idea to dress warmly and wear waterproof outerwear. and, from personal experience, bring a camera with a good telephoto lens to get close-up views of the seals. 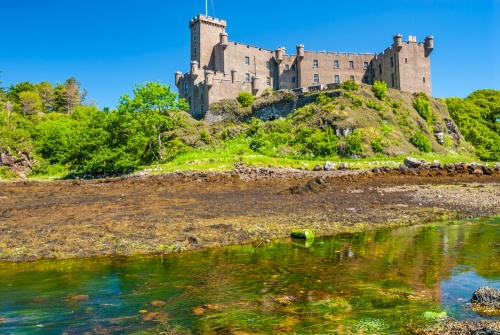 Probably the busiest visitor attraction on Skye, Dunvegan Castle dates to the 14th century and has traditionally been the seat of Clan Macleod. The castle stands on a rocky outcrop looking out over the loch. At the heart of the castellated stately home is a stone keep built by the 3rd Chief of Clan Macleod. Much of the remainder dates to the Victorian period.

Dunvegan Castle has numerous clan treasures on display, but none more precious than the legendary Fairy Flag of Clan Macleod. The Fairy Flag is a silk banner that was gifted, so the story goes, to the clan by a fairy princess. It can be used to summon aid if the clan is in desperate need, but can only be used three times. It has already used up two of its three 'lives', so now it sits in a glass display case.

The flag's fabric has been analysed and is thought to come from Persia and date to as early as the 4th century. It is possible that it was brought back to Scotland by a crusading knight in the medieval period. 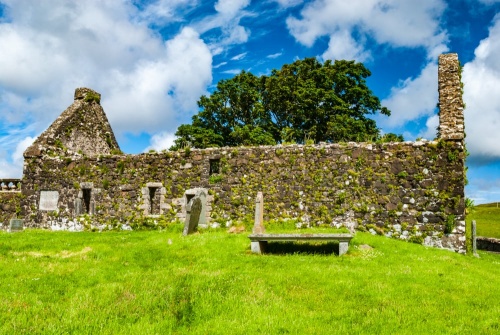 Just off the A850 is a stone-walled burial enclosure, protecting the roofless remains of St Mary's Old Church, the original parish church for the Duirinish region. The church was built in 1694 and holds the graves of several Macleod chieftains as well as the graves of many MacCrimmons, the hereditary pipers for Clan Macleod.

The most prominent memorial is that of Lord Thomas Frazer, the father of Simon Fraser, 11th Lord Lovat. The younger Fraser was executed in 1747 for his role in the Jacobite rebellion. 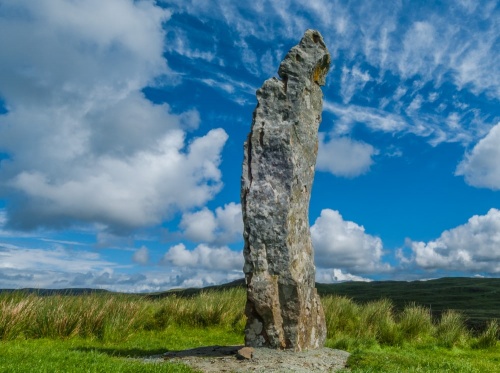 This monolithic standing stone looms over the village. It looks for all the world like a Neolithic monument, but it is, in fact, quite recent. It was erected in 2000 to mark the millennium and was erected by villagers using traditional hand tools and techniques that would have been used by their ancestors. The stone, known in Gaelic as Druim Na Creige, is set in a concrete base. It is roughly 5m high.

It is well worth the short but stiff climb to see the stone, if for no other reason than to enjoy the marvellous views westward over Loch Dunvegan to Macleod's Tables. There is no direct path, but the stone is easily visible on the hill above the village church, off the A850. 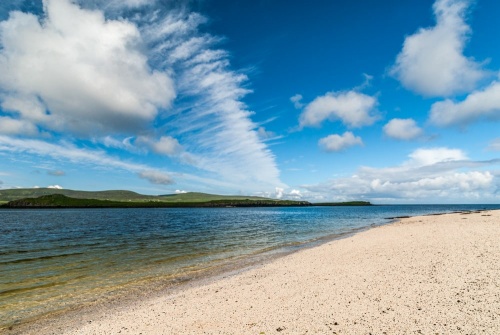 A short drive north of Dunvegan brings you to Claigan, where a trail leads along the shore of the loch to the famous Coral Beach. This stretch of pristine 'sand' is actually composed of minute pieces of calcified algae known as maerl, dried and bleached by the sun. The maerl is mixed with crushed snail shells to create a beach that would look at home on a remote tropical island. 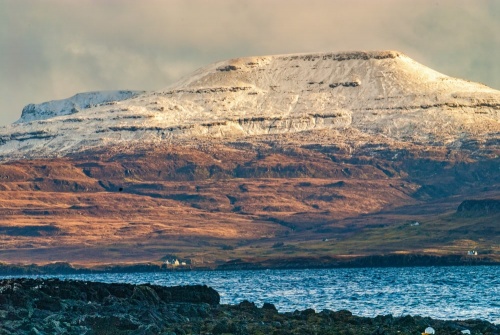 If you look west across Loch Dunvegan from the village, the horizon is dominated by a pair of flat-topped hills, Healabhal Mhor and Healabhal Bheag, known collectively as Macleod's Tables

The name refers to a tale that ought to be true, even if it isn't.

It seems that the chief of Clan Macleod was attending a fashionable state dinner in Edinburgh, when he was provoked into boasting that he possessed a larger dining room, a finer table, and more precious candlesticks than his host. His diner companions scoffed at his boast, so he invited them to see for himself.

When his guests had arrived on Skye, Macleod had his torch-bearing retainers guide them to the top of Macleod's Tables, where dining tables had been set beneath a starry sky. There he told them that his retainers were more precious than gold candlesticks to him, and the boundless heavens were his dining hall. His guests left, suitably impressed, and ever since then, the twin hills have been called Macleod's Tables. 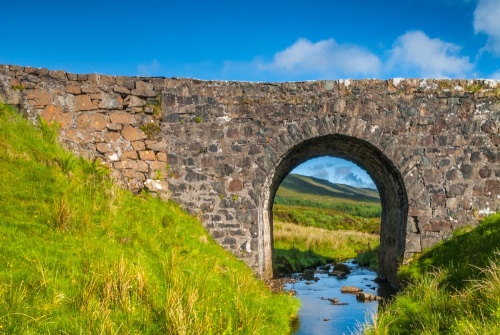 A few miles north of Dunvegan on the B886 Waternish road is the Fairy Bridge, where a faerie princess is said to have bid farewell to her mortal Macleod husband and their child before returning to her faerie realm. For the full story behind the legend, see our Fairy Bridge page.

Dunvegan is at the junction of the A850 and the A863, at the south-eastern corner of Loch Dunvegan. There is a parking area on the A850 just south of the Giant MacAskill Museum, with a toilet block and recycling centre.

About Dunvegan, Skye
Address: A850, Dunvegan, Isle of Skye, Highlands and Islands, Scotland
Attraction Type: Village
Location: At the junction of the A850 and the A863 at the southern end of Loch Dunvegan.
Location map
OS: NG251477
Photo Credit: David Ross and Britain Express

Nearby accommodation is calculated 'as the crow flies' from Dunvegan. 'Nearest' may involve a long drive up and down glens or, if you are near the coast, may include a ferry ride! Please check the property map to make sure the location is right for you.

More self catering near Dunvegan, Skye