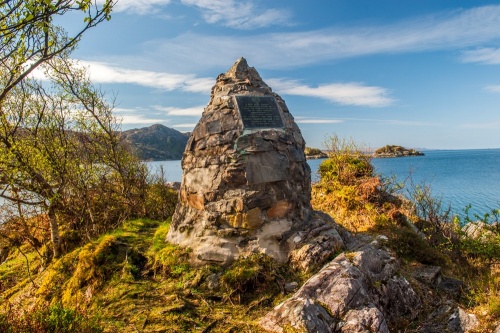 The historic 'Road to the Isles' (less poetically known as the A830) wends westward from Fort William, following the shore of Loch Eil and touching the northern tip of Loch Shiel at Glenfinnan before reaching the smaller lochs of Eilt and Ailort and at last arriving at Loch nan Uamh.

There, on the shore of the loch, whose name translates as 'Loch of the Caves', half-hidden amidst trees on the end of a small promontory, stands a cairn marking one of the most intriguing and ultimately tragic tales in British history.

For it was here on the shore of Loch nan Uamh that Charles Edward Stewart, better known as Bonnie Prince Charlie, came ashore in 1745 to launch his bid for the throne of Britain. And it was here in 1746 that the Prince, a hunted fugitive following his defeat at the Battle of Culloden, left Scotland for good.

The Prince's Cairn thus marks both the beginning and the poignant end of Bonnie Prince Charlie's attempt to win back the throne lost by his grandfather.

The Prince arrived in Loch nan Uamh on 25 July 1745 aboard the French privateer the Du Teillay. If he was expecting to be greeted by throngs of Stuart supporters he was disappointed. The local reaction was underwhelming at first, but as news of his arrival spread to the Highland clans, enthusiasm for the Jacobite cause gathered momentum. The Prince moved east to Glenfinnan, at the head of Loch Shiel, where he raised his standard and waited for his support to gather.

Fourteen months later he would be back, a hunted fugitive, his bid for the throne a shattered dream, to re-board another French vessel and take flight to safety abroad.

In a poignant twist, the name of the French vessel charged with taking the Prince to safety was L'Heureux, which translates as 'Happy'.

One of the supporters who accompanied the Prince aboard L'Heureaux was John Roy Stuart, a Gaelic poet known as The Bard of Culloden. Stuart fought at Culloden and later wrote 'Latha Chuil-Lodair, or The Day of Culloden', a highly romantic - and heavily biased - account of the battle. Stuart is thought to be the inspiration for the character Alan Breck in Robert Louis Stevenson's classic novel Kidnapped. 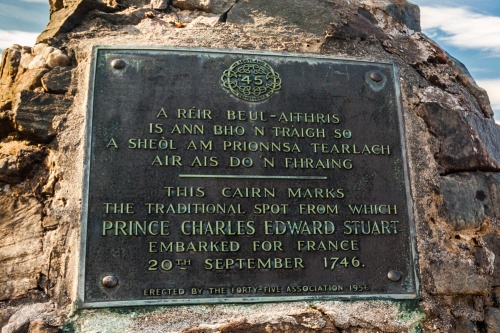 The commemorative panel, in Gaelic and English

The Prince's Cairn was erected in 1956 by the 1745 Association, a historical society dedicated to studying the Jacobite period in Scottish history and to preserving its memories. Part of their purpose is to mark historical sites linked to the Jacobite cause.

The cairn bears a plaque in both Gaelic and English. The Gaelic reads, 'A reir beul-aithris is ann bho 'n trÃ igh so an sheÃl Am Prionnsa Tearlach air ais do 'n Fhraing', and the English translation reads, 'This cairn marks the traditional spot from which Prince Charles Edward Stuart embarked for France. 20th September 1746. Erected by the Forty-Five Association 1956'.

It seems a trifle curious that the plaque only mentions the Prince's departure for France, but not his arrival in the same location just 14 months before.

The cairn was paid for by public subscription and takes the form of a traditional Highland stone cairn, often used as a symbol of remembrance.

The Skirmish of Loch nan Uamh

Another tragic twist to the Jacobite tale is that Bonnie Prince Charlie's French and Spanish allies sent him money and weapons to carry on the fight, but they arrived too late. The Battle of Culloden was fought on 16 April 1746. Two weeks later on 30 April, a pair of French privateer vessels, the La Bellone and the Le Mars, anchored in Loch nan Uamh. The ships carried money, gunpowder, arms, and brandy.

The hills overlooking the head of the loch were occupied by some 400 Jacobites, most of them Clanranald Macdonalds. 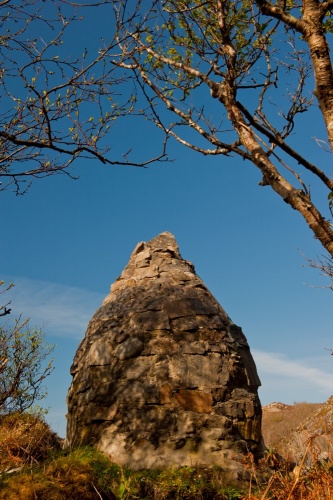 Another view of the Cairn

At first the Jacobite supporters on shore mistook the French ships for Hanoverian supporters and fired on them, but when the ships raised their French flags the mistake was realised.

Some supplies were unloaded, and Jacobite fugitives were taken on board, but the British navy was close behind. Three British ships sailed into the loch on 2-3 May. They engaged the French vessels, which were anchored close to the rocky islets you can see at the head of the loch. After several hours of exchanging broadsides, and with loss of life on both sides, the English ships withdrew and the French ships made good their escape.

The Skirmish of Loch nan Uamh has been called 'The Jacobites Last Stand'.

The Le Mars bore a large shipment of Spanish gold estimated at 1,200,000 livres, plus money sent by the French themselves. Seven caskets of Spanish gold were unloaded. One was later stolen by the McDonalds of Barrisdale, but the other six caskets were hidden around Loch Arkaig. It was decided to use the money to help fugitive Jacobites escape government troops. Dispersal of the money eventually fell to Macpherson of Cluny, the head of Clan Chattan.

Some of the gold made its way to Prince Charles, but some was never recovered. The Prince accused Cluny of stealing it for himself, and the mystery of the missing Loch Arkaig treasure caused great discord amongst Jacobite supporters, with claims and counter-claims that rumbled on for centuries. The remaining treasure has never been recovered and may still be hidden at a secret location somewhere near Loch Arkaig.

An information panel near the Prince's Cairn rather laconically sums up the story of the Loch Arkaig Treasure by saying, 'Despite protests from the MacDonalds, the gold was removed to Loch Arkaig in Lochaber for distribution among the clans. Some remains buried in the hills'. 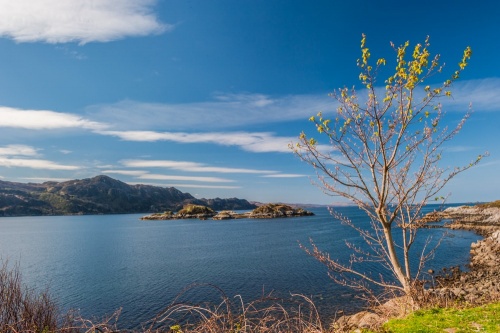 Loch nan Uamh is also known for its railway viaduct, sometimes called the Gleann Mama Viaduct. This is one of six viaducts on the route between Fort William and Mallaig, the route travelled in summer by the Jacobite Express steam train service. The viaduct was designed by Robert McAlpine, who was given the nickname 'Concrete Bob' because he so often used concrete as a building material.

In this case, McAlpine's use of concrete had tragic consequences, for within one of the piers are preserved for posterity the remains of a horse and cart that fell into the concrete before it had set.

About Prince's Cairn, Loch nan Uamh
Address: A830, Road to the Isles, Arisaig, Highlands and Islands, Scotland
Attraction Type: Countryside - Landmark
Location: On the south side of the A830 at the tip of Loch nan Uamh.
Location map
OS: NM720844
Photo Credit: David Ross and Britain Express

Armadale Castle Gardens and Museum of the Isles - 13 miles (Museum)

Nearby accommodation is calculated 'as the crow flies' from Prince's Cairn, Loch nan Uamh. 'Nearest' may involve a long drive up and down glens or, if you are near the coast, may include a ferry ride! Please check the property map to make sure the location is right for you.

Self Catering near Arisaig