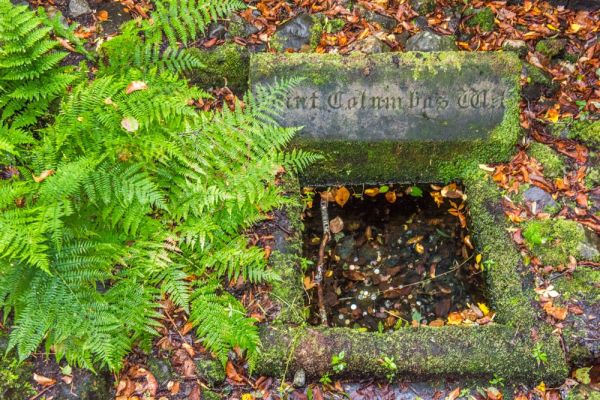 Sometime around the year AD 565, St Columba journeyed from his base on the island of Iona, up the Great Glen to visit the court of Brude, or Bridei, a king of the Picts as part of his mission to convert the Picts to Christianity.

Brude reigned from roughly AD 555 to 584. We do not know where his seat of power was but it was said to be near Loch Ness. He was not, as is sometimes claimed 'The King of the Picts', for several rulers claimed that title.

On the way to meet with Brude St Columba is said to have founded a church at what is now Invermoriston, on the north-western shore of Loch Ness. 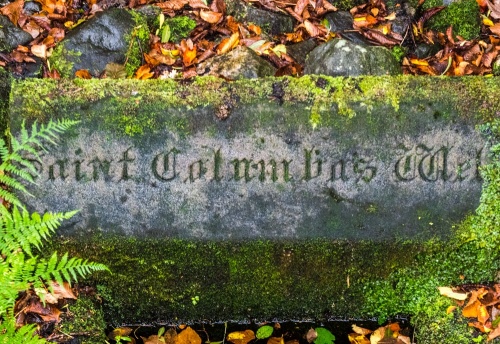 The church, known as Clachan Cholumchille (Columba's Church) is long gone, but near its presumed site is a holy well said to have been blessed by the saint. The well is known in Gaelic as Fuaran Choluim Chille, or simply 'Saint Columba's Well'.

Until St Columba's visit, the well water was considered poisonous and locals feared that it would cause boils if it touched the skin. Columba drove out the evil spirits infesting the well and the water immediately turned pure. From that point on it was considered to have healing properties and was especially good for curing hangovers, rheumatism and infertility.

Another rather fanciful twist says that the well was the source of Loch Ness itself. 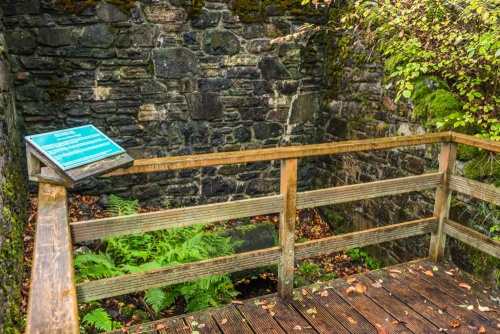 The viewing platform above the well

Not only did Columba make the well water clear, but he also used the well to baptise local pagans that he had converted to Christianity.

For many years there was an uninscribed stone standing beside the well, said to have been blessed by Columba.

The holy well is extremely easy to reach. There is a signed archway opposite the main visitor car park beside the village hall. Cross the road from the car park, go through the arch, and descend a flight of steps to a walkway and viewing platform above the well, erected by the Invermoriston Heritage Group in 2005. 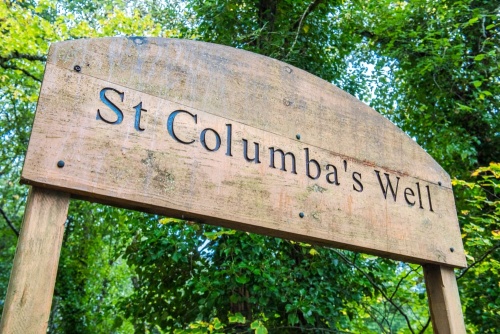 The archway leading to the well

The well consists of a square basin lined by stones. Above it is an inscribed stone with the words 'St Columba's Well'. There is no obvious way down to the well from the viewing platform so you can't easily test the healing qualities of the water for yourself.

It is just a few steps from the holy well entrance to the picturesque humpback bridge over the River Moriston, built by the famous Scottish engineer Thomas Telford from 1803-1821. The bridge gives excellent views of Invermoriston Falls.

Nearby accommodation is calculated 'as the crow flies' from St Columba's Holy Well, Invermoriston. 'Nearest' may involve a long drive up and down glens or, if you are near the coast, may include a ferry ride! Please check the property map to make sure the location is right for you.

The Cross at Kingussie - 23 miles
Kingussie, Highlands and Islands
Stay from: £110.00