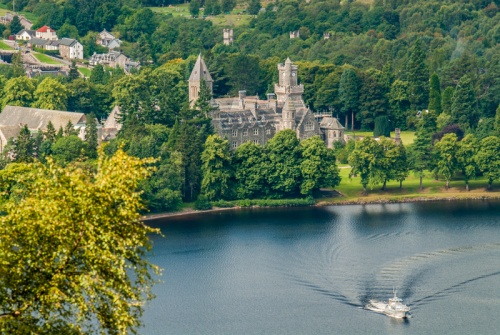 The pretty village of Fort Augustus lies at the southern end of Loch Ness and is one of the most popular visitor destinations on the Loch. The village straddles the Caledonian Canal, the 19th-century engineering project that connects Inverness on the east coast to Fort William on the west coast.

Watching boats pass through the canal on their way to and from Loch Ness is always a popular pastime and you can often find the canal locks lined with visitors.

The story of Fort Augustus really begins with the Jacobite rebellion of 1715. The rebellion attempted - unsuccessfully - supplant King George I and place James Stewart 'The Old Pretender' on the throne. The rebellion was quickly suppressed but the Hanoverian government in London wanted to ensure that the unruly Highlands were kept firmly under control.

To that end, they launched an ambitious program of road and bridge building to aid military transport and linked those roads to major forts. Among those forts were Fort George, near Inverness, and Fort William, at the western end of the Great Glen. Until the 18th century, the only fortress on Loch Ness itself was Urquhart Castle, which by that time was in decay. 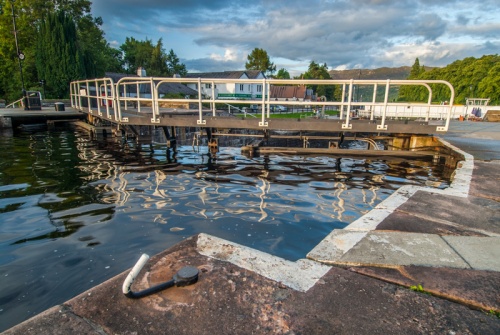 A lock on the Caledonian Canal

A new military barracks was built at Kiliwhimen, at the point where the River Oich empties into Loch Ness. The name Kiliwhimen is an English mangling of the original Gaelic name Cill Chuimein.

Kiliwhimen Barracks was begun in 1716 and were composed of two three-storey blocks within a defensive curtain wall. It was built to house 60 soldiers. Little of the Barracks remain today beyond a section of the curtain wall. The Barracks site is now occupied by the Lovat Hotel.

In 1729 General George Wade, the Commander in Chief of the army in North Britain decided to enlarge the original fort to enable it to hold 1,000 men in an emergency. He renamed the fortification Fort Augustus after Prince William Augustus, the Duke of Cumberland. In the end, the fort supported a full-time garrison of 300 men.

Unfortunately, General Wade's defences could not hold up to an attack by Jacobites supporting Bonnie Prince Charlie's revolt in 1745. The garrison was forced to surrender after a brief two-day siege. The fort was eventually closed in 1818 and the site became a Benedictine abbey. Fort Augustus Abbey then closed in 1998 and the site was transformed into luxury apartments incorporating some parts of the original 18th-century defences. 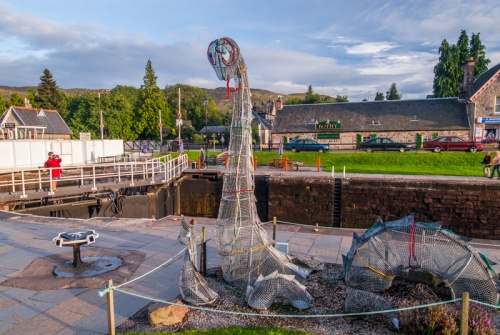 A Loch Ness Monster sculpture beside the canal

Long before that the settlement of Fort Augustus was transformed by the building of the Caledonian Canal, linking Fort William to Inverness. The canal was first mooted in 1773 but was not completed until 1822. It was 22 miles long and had 29 locks.

The canal took 12 years to build and cost a staggering £910,000. It was never a commercial success, though it proved useful during WWI when the German navy threatened shipping off Scotland's north coast. It is now mainly used by leisure visitors.

Beside the canal is the modern Caledonian Canal Heritage Centre, a combination shop, cafe and information centre that tells the fascinating story of how the canal was built.

On the far side of the canal from the heritage centre is the Clansman Centre, where you can watch costumed guides show what it was like for the Highland Clans that lived around Loch Ness in the 17th century.

Across from the Clansman Centre is the Queen Victoria Diamond Jubilee Fountain, an ornate drinking fountain erected in 1897 to mark 60 years of Queen Victoria's reign. It stands within a small garden area known as Victoria Gardens. The fountain was designed by Walter Macfarlane and Company of Glasgow.

The Queen passed through Fort Augustus aboard her royal steamship in 1873. She was definitely not amused, and commented that the locals were very rude as the peered through the steamship windows to catch a glimpse of her dining. 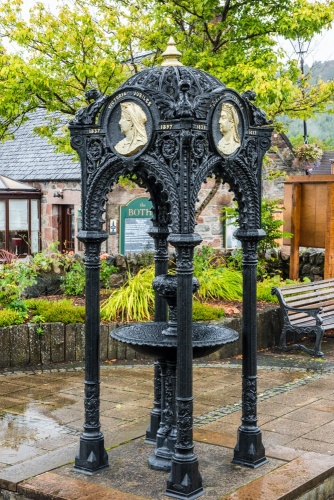 Opposite the Clansman Centre on the north side of the Caledonian Canal is the War Memorial Hall, built by Lord Lovat from 1892. It was used as a drill hall by the Imperial Yeomanry and later by Lovat's Scouts. After WWI a war memorial was added to the front facade of the building and it was renamed.

From the modern road bridge that carries the A82 through the village, you can look north and see a large bridge pillar in the centre of the River Oich. It is all that remains of a bridge built to carry railway tracks from Fort Augustus station to a station at Fort Augustus Pier. Passengers could then catch a steamboat travelling up Loch Ness to Inverness. The railway was short-lived; it opened in 1903 and closed down in 1933. The line was abandoned and the bridge allowed to decay.

If you walk down Canal Side lane beside the canal you come to the ruins of another bridge, this one much older and historically significant. The bridge stands on the site of an old ferry crossing, which was the only way across the River Oich until 1746.

In the aftermath of the Jacobite defeat at Culloden, the government built a stone bridge across the river to aid troop transport. The bridge was used by cattle drovers and later carried the main road between Inverness and Fort William.

In 1849 most of the bridge was swept away in heavy floods. A temporary trellis bridge made of timber was erected, but 'temporary' turned into permanent. The timber bridge remained in use until the present road bridge was built to carry the A82.

What remains is one of the original 18th-century stone piers and a section of timber trellis. This timber trellis is of great historical significance but sadly the bridge has been allowed to decay and it is on the Heritage at Risk Register. Local efforts are underway to preserve the bridge. 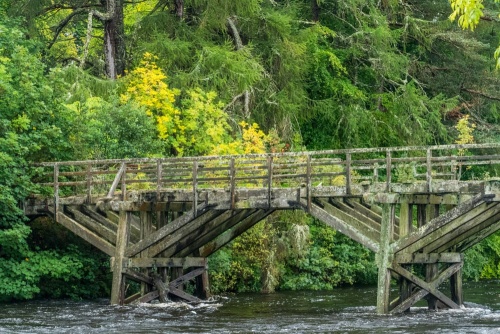 The area around Fort Augustus is extremely popular with walkers and cyclists. The Great Glen Way long distance trail runs through the village.

Just north of Fort Augustus is a forestry plantation at Allt na Criche. From the Forestry Commission Scotland parking area you can take a very pleasant one hour walk along Allt na Criche burn to a lovely waterfall. The trail offers excellent views over Loch Ness.

If you follow the A82 along the north-eastern bank of Loch Ness for 17 miles you come to historic Urquhart Castle, a 13th-century fortress on the loch shore. The castle was probably built by Alan Durward around 1230. It was captured and recaptured in turn by Scots and English during the Scottish Wars of Independence, and later subjected to regular attacks by the MacDonalds, Lords of the Isles.

Our family has visited Fort Augustus on numerous occasions. It is a lovely place to stop and explore, and everyone seems to love watching boats go through the canal locks. There are quite a few shops catering to the tourist trade, and if you ever want a Loch Ness Monster plush toy for your little ones, this is the place to come (we speak from experience). 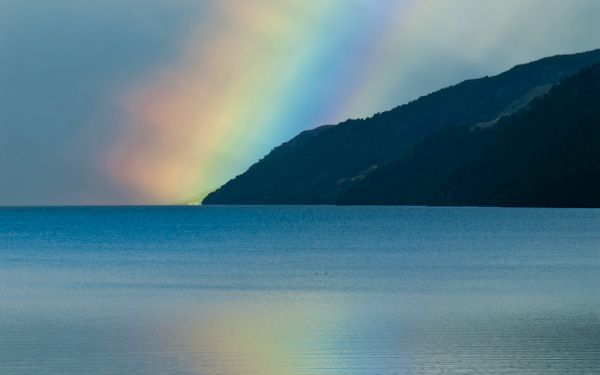 A rainbow over Loch Ness from Fort Augustus 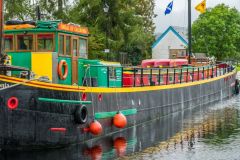 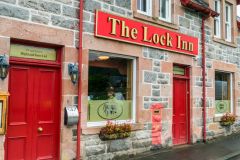 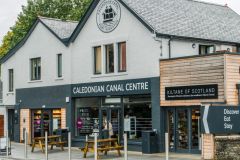 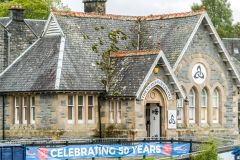 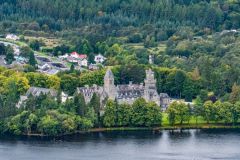 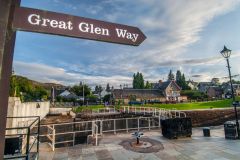 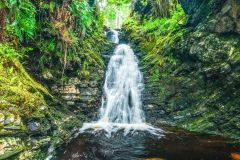 About Fort Augustus
Address: A82, Fort Augustus, Highlands, Scotland
Attraction Type: Village
Location: On the A82 at the south-western end of Loch Ness, 35 miles from Inverness. Public parking area on the A82 just north of the Caledonian Canal.
Location map
OS: NH379091
Photo Credit: David Ross and Britain Express

Nearby accommodation is calculated 'as the crow flies' from Fort Augustus. 'Nearest' may involve a long drive up and down glens or, if you are near the coast, may include a ferry ride! Please check the property map to make sure the location is right for you.

More self catering near Fort Augustus

Self Catering near Fort Augustus