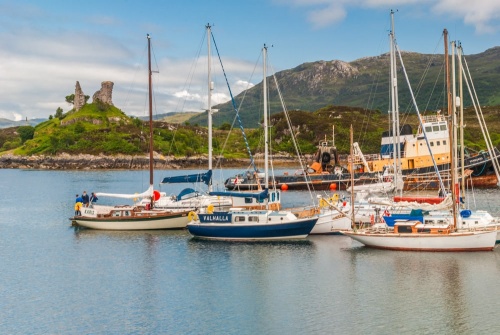 Kyleakin is a picturesque village on the east coast of the Isle of Skye, opposite Kyle of Lochalsh on the Scottish mainland. The village name comes from the Gaelic 'Caol Acain'. The exact meaning of the words is disputed, but the most frequent interpretation is that it means 'Strait of Haakon' after King Haakon IV of Norway.

Haakon is known to have used Kyleakin as a mooring place for his war fleet before the pivotal Battle of Largs in 1263, a battle that signalled the beginning of the end of Norse rule along the west coast of Scotland.

Another interpretation of the village name is that it derives from a mythical Celtic hero named Acunn, who is said to have lived in Glenelg and been buried at Torrin. 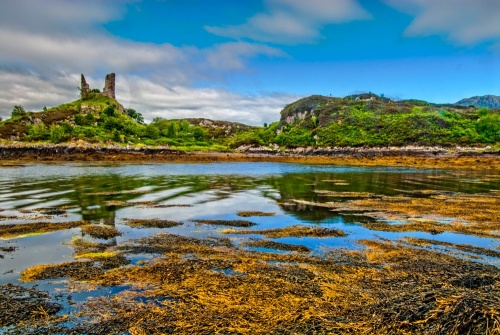 The west coast of Scotland was under Norse control at least as early as the 9th century, and it seems almost certain that the Norse built a castle on a hill overlooking Kyleakin harbour. The castle defended the sheltered harbour, where they moored their longboats. It also commanded the narrow strait between Skye and the mainland, now known as Kyle Akin.

Findanus, the Chief of Clan Mackinnon, married a Norse princess known to history as 'Saucy Mary'. Her dowry included the castle, which then became a Mackinnon stronghold. Findanus and his wife stretched a chain across the strait and forced ships to pay a toll or make the hazardous, longer voyage around Skye and through the treacherous Minch passage.

Saucy Mary is said to be buried on Beinn na Caillich, the hill immediately behind the castle. 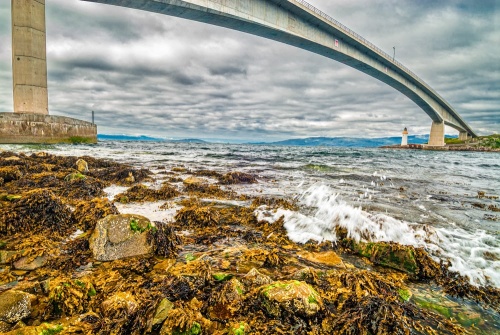 The Mackinnons rebuilt the ancient Norse fortress sometime in the late 15th century, and it served as a meeting place for all the clan chiefs in 1513 when they decided to support Donald MacDonald's claim to the Lordship of the Isles.

The Mackinnons abandoned Castle Moil in 1601, and it was allowed to crumble into decay. It is now a roofless, romantic ruin, easily accessible by a short walk along the south bank of the harbour inlet. 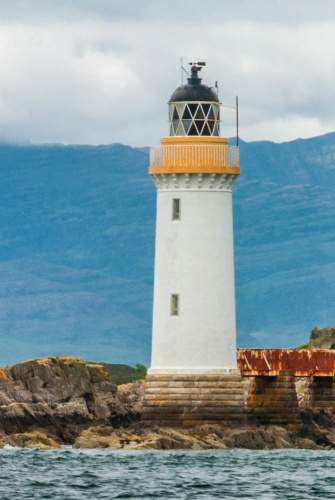 In 1811 Alexander MacDonald, 2nd Baron MacDonald of Skye, launched an ambitious scheme to create a model town at Kyleakin, dubbed New Liverpool. The development would have made Kyleakin a thriving shipping port based around the busy herring trade, with an expanded port ready to welcome boats of all classes from around the world.

A town plan was prepared and a grid of housing plots laid out 'for people of differing classes'. Lord MacDonald, whose family seat was at Armadale Castle on the Sleat Peninsula, called in one of the most prominent Scottish architects of the period, James Gillespie Graham, to design New Liverpool.

MacDonald's ambitious scheme would have seen terraces of two-storey houses for a population of several thousand people, with industrial buildings clustered around the harbour. Gillespie Graham's town plan was more suited to a cityscape, with large houses for wealthy patrons, and churches topped with spires.

Unfortunately for Lord MacDonald, it quickly became apparent that Skye's relatively remote location made it unappealing as a major centre of commerce, and the plans for New Liverpool were quietly abandoned.

In 1841 a regular ferry service was established between Kyleakin and Kyle of Lochalsh. The ferry service continued until 1995 when the Skye Bridge was completed. 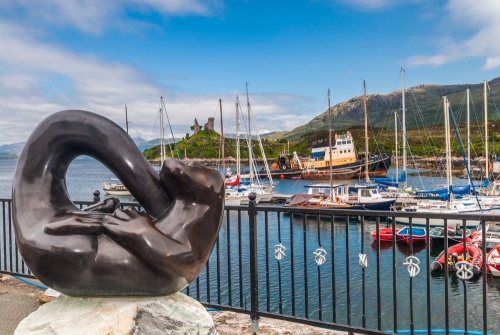 A bridge linking the Isle of Skye to the Scottish mainland was mooted as early as the late Victorian period, but it was not until 1989 that a decision was made to erect a bridge. The contract was won by a USA-German-Scottish consortium, who planned to build two bridges that joined each other at the small island of Eilean Ban in the centre of the strait.

The project was approved on the understanding that there would be a high toll imposed for a limited period to recoup construction costs. Construction began in 1992 and the bridge was officially opened on 16 October 1995. Construction cost an estimated Â£25 million, at least Â£10 million over budget.

The high cost of the toll made the Skye Bridge extremely unpopular with local residents and tourists alike, with some calling it the most expensive road in Europe. The Scottish government eventually purchased the bridge outright for Â£27 million and immediately abolished the toll charge. 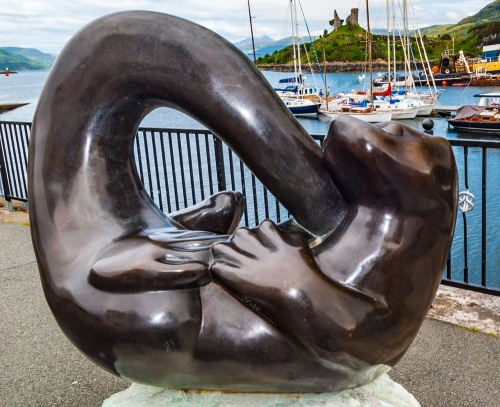 A closer look at the Teko sculpture

Dwarfed by the soaring span of the Skye Bridge is a 70-foot-tall lighthouse, built in 1857 to a design by the famous Stevenson family of engineers. The designers were the brothers David and Thomas Stevenson. Thomas was the father of the famous author, Robert Louis Stevenson.

The lighthouse light was initially created by burning whale oil. In 1898 it was converted to run on paraffin vapour, then in 1960 to cleaner-burning acetylene gas. The last permanent keepers left at this time, and the keepers' cottages were sold.

The lighthouse was decommissioned in 1993. For the safety of boats sailing through the channel a system of coloured buoys was installed. The island is now a nature sanctuary.

Kyleakin will forever be linked to writer Gavin Maxwell (1914 - 1969), whose wildlife books were wildly successful during his lifetime and continue to draw visitors to Skye today. His most famous work was Ring of Bright Water, detailing his life raising a smooth-coated otter named Mijbil.

In 1963 Maxwell bought the lighthouse keepers' cottages on Eilean Ban, and came to live there in 1968. He stayed on Eilean Ban until his death the following year.

Maxwell's legacy lives on in the Bright Water Visitor Centre in the heart of Kyleakin. The Centre offers information on Maxwell's life, his conservation efforts, and the natural history of the area. The Centre also runs regular tours of Eilean Ban from Easter through September.

A delightful statue of a sea otter stands on The Pier, across the road from the Bright Water Visitor Centre. The statue was created by Scottish sculptor Laurence Broderick and is called Teko after one of the otters in Ring of Bright Water.

Forestry and Land Scotland maintains two waymarked walking trails in Kyleakin, looping through beautiful woodland on the edge of the village. There is a car park on Old Kyle Farm Road, just south of the Skye Bridge roundabout, or you can stroll from the village centre. The Cnoc Trail climbs 2.4km to the top of Cnoc a’ Mhadaidh-ruaidh for fabulous views north to Eilan Ban, while the Anavig Trail is a longer 3.6km route over the hills, with views to Raasay and beyond.

Kyleakin has all the visitor facilities you could need, with a village shop, post office, and community hall.

In visiting Kyleakin you will be following in the footsteps of royalty. Of course, there was King Haakon of Norway, but more recent royal visitors include the Duke and Duchess of York (later King George VI and Queen Elizabeth), followed in 1956 by Queen Elizabeth II and the Duke of Edinburgh, and in 1962 by King Olav of Norway.

As a final note, you will get sour looks from the locals if you insist on pronouncing the village name as 'Kyle-ee-kin'. The correct pronunciation, I am told, is 'Kyle-AH-kin'. So now you know.

Kyleakin is easily reached by a minor road off a roundabout on the Skye end of the Skye Bridge, or off the A850 from Broadford. There is ample visitor parking on Kyleside.

Nearby accommodation is calculated 'as the crow flies' from Kyleakin. 'Nearest' may involve a long drive up and down glens or, if you are near the coast, may include a ferry ride! Please check the property map to make sure the location is right for you.

More self catering near Kyleakin, Skye