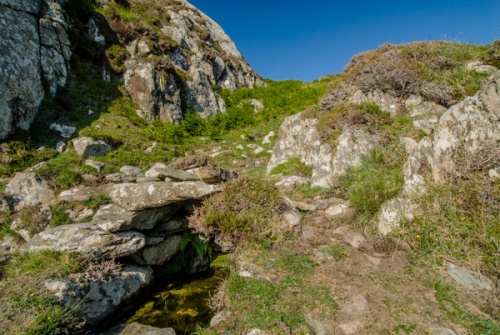 St Columba's Well is, as the name suggests, an ancient holy well said to have been used by the 6th-century Irish saint Columba when he settled briefly on Colonsay. Unlike many such saintly legends, this one has every chance of being true, as Columba is fairly certain to have visited Colonsay.

The well was believed by locals to have healing properties, and they left small offerings beside the spring. For many years a silver cup hung beside the well.

The story of St Columba on Colonsay makes fascinating reading. Apparently, Columba landed on Colonsay after fleeing Ireland, but when he realized that on a clear day he could still see the Irish coast from Colonsay, he moved on to found his monastery on Iona.

It is a bit tricky to find the holy well; I had to ask for directions from my landlady on Colonsay. First, follow the B8608 to Kiloran Bay. Just before the bay, there is a drive to the right signed to Balnahard. Park inside the fence and follow the signed track past the end of Kiloran Bay.

As the path rises steeply and turns west at the top of Kiloran Bay there are high cliffs to your left. About 20 metres below the path is a turf-covered stone arch that has been erected over the wellhead. The well is really a natural spring with masonry walls and a stone slab as a capstone. It is 1.2m deep by 0.8m wide, and the opening faces almost due west.

Apart from its historical significance, the sheer beauty of the surroundings makes St Columba's Well worth a visit. 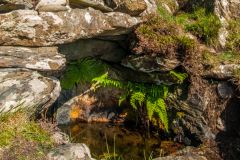 Nearby accommodation is calculated 'as the crow flies' from St Columba's Well. 'Nearest' may involve a long drive up and down glens or, if you are near the coast, may include a ferry ride! Please check the property map to make sure the location is right for you.