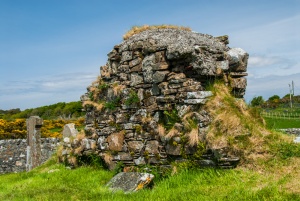 The west gable of the medieval chapel

Kilmeny is an ancient Celtic site, whose Gaelic name Cill Mheinidh translates as 'Eithne's Church', but it isn't clear which St Eithne is commemorated. Within the burial ground at Kilmeny stands the ruins of a medieval chapel, now partially covered in turf. The burial ground is known as 'Cill a' Mhanaich', or burial-ground of the monk, though that may simply be a 19th-century misunderstanding of the original 'Cill Mheinidh'.

Nothing seems to be known for certain of the chapel's history. The west wall and gable is the only part of the building that still stands to any great height. The west wall stands only 2.5m to the top of the gable, and 6.5m wide. From the west wall, you can trace a section of side wall. The foundations of the east wall have been found, suggesting that the chapel was about 50 feet long.

The church walls are built of rubble masonry cemented with lime mortar. On the external face of the west wall is an blocked archway of dressed stones. On the inner face of the wall is an inscription reading, 'Duncan McNab 1769', probably commemorating a family burial plot.

The most interesting historical remain in the burial ground is the stub of what appears to be a churchyard cross, set on a small knoll. The stone is slab-shaped and broken off about 0.3m above ground level.

Several medieval grave slabs can be found in the burial ground surrounding the chapel ruins. At least 2 stones bear worn carving of foliage, and 2 others have carved swords. There are also several good post-Reformation graves, including that of an innkeeper named Andrew MacLean, who died in 1748. Slightly later is a grave stone commemorating Neil McQuillan (d. 1762) and his wide Elizabeth Campbell (d. 1776). 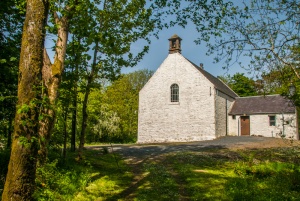 The earliest reference to a church at Kilmeny comes from 1549, when it is listed as one of 4 parish churches on Islay. It is possible that Kilmeny began as a dependent chapel in Kilarrow parish. Kilmeny traditionally belonged to the Bishop of the Isles.

Kilmeny church was adapted from Telford's design by Walter Frederick Campbell, laird of Islay. It stands in lovely woodland called Church Plantation, about 400m north of the medieval church and burial ground.

It won't take long to explore the chapel and burial ground; the chapel ruins are scanty, and the main interest here is really the variety of 18th century and older grave stones. Do take a moment to walk off the main drive to see the Telford church, a lovely sight in its woodland setting. 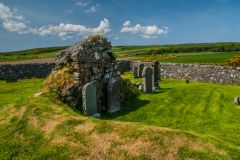 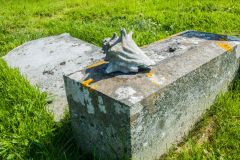 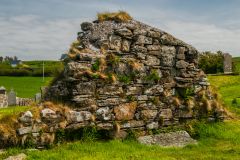 Nearby accommodation is calculated 'as the crow flies' from Kilmeny Old Parish Church. 'Nearest' may involve a long drive up and down glens or, if you are near the coast, may include a ferry ride! Please check the property map to make sure the location is right for you.