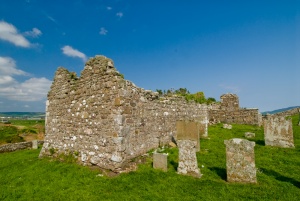 The ruined chapel at Kilkavan

Some time around the year AD 600 a chapel was erected on the hillside at Kilkavan, west of Campbelltown. The Kilkavan area was a meeting place long before the coming of Christianity to the Kintyre peninsula, but the early missionaries needed a more suitable and sheltered place to preach.

The most influential missionary was St Kevin, an Irish saint and abbot of Glendalough in County Wicklow, Ireland until his death in AD 618.

The church was either founded by St Kevin or named in his honour. The name Kilkavan translates as Kevin's church. We know that missionaries travelled through Kintyre from around AD 563, so we can make an educated guess that the chapel was established around AD 600. We do not know exactly when it was abandoned, but a document from 1794 describes the building as ruinous. 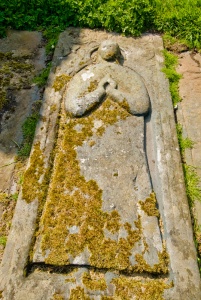 Carved grave slab of a priest

The ruined building we see today appears to be 13th century. It began as a very simple rectangular building on an east-west axis. It is built of local rubble with yellow-grey sandstone quoins. The walls stand to 3m on the north, but are minimal on the other sides. Only one doorway remains, at the west end of the north wall, but partial remains of 2 medieval windows can be seen in the south wall.

The most interesting feature at Kilkavan is a series of 14th-15th century graves slabs in West Highland style. Eight of the slabs are set into the earth at the east end of the chapel ruins, while 2 more post-Reformation stones stand outside the church.

The carving is simply magnificent, though quite worn by weathering. One slab shows a figure of a knight in relief, his hand grasping a sword. Others show simply a sword, surrounded by ornate interlace patterns.

One slab shows a very small figure of a monk or priest, wearing a cowled robe, set within an ogee arch and surrounded by ornate foliage patterns. A large slab shows the figure of a monk in high relief, his hands clasped in prayer. One upright gravestone is carved with a skull and crossbones; not a symbol of piracy but of mortality. 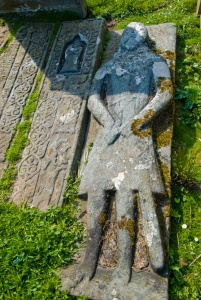 Grave slab of a knight

One striking grave stone has a ship, its sails furled, in high relief. Under the ship is the inscription,

My warfare's oe'r,
My bark is moored,
And here in hope I lie
Till Christ command
Me to set sail,
And meet him in the skye

An 18th-century burial enclosure has been erected against the south wall.

The Chapel is an open site. It can be reached up a farm track off the B843 at Trodigal Cottage, about 1km east of Machrihanish. This really is a fascinating site, with a real sense of antiquity. The old grave slabs are remarkably well-preserved considering that they stand in the open. I really loved the medieval knight figure, grasping his sword hilt. The West Highland style of carving is so vivid that it seems the figure is about to come to life. 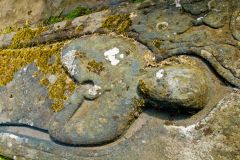 Nearby accommodation is calculated 'as the crow flies' from Kilkivan Chapel and Graveyard. 'Nearest' may involve a long drive up and down glens or, if you are near the coast, may include a ferry ride! Please check the property map to make sure the location is right for you.

More self catering near Kilkivan Chapel and Graveyard

More bed and breakfasts near Kilkivan Chapel and Graveyard