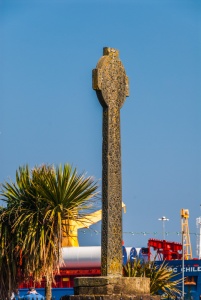 Standing rather incongruously on a traffic island near the old quay in Campbeltown is the finest late medieval carved cross in Kintyre. The disc-headed cross was probably carved around 1380 or shortly thereafter. It is made of blueish-green schist, probably quarried near Loch Sween. It stands an impressive 3.3m high (about 11 feet). At about 81cm (32 inches) it has the largest disc-head of any known cross in Scotland.

The cross surface is carved with representations of religious figures, foliage patterns, grotesque beasts, sea-monsters, and a mermaid. The socket seems to be original, but the base is modern.

One face of the cross depicts St Mary and St John, below a pair of other saints. On the left arm of the cross is St Michael slaying a dragon, on the other is simply a foliage design. The reverse of the cross has a mermaid and sea-monster at the top, with a pair of peculiar animals at each side arm.

The centre of the disc is filled with the foliated pattern of a cross. The foliage pattern runs down the shaft and ends with another pair of animals near the base. The edges of the cross are carved with foliage patterns of different designs. 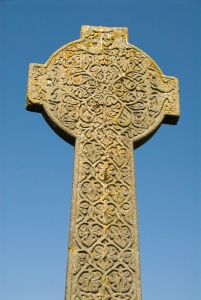 The cross is inscribed with a Latin verse which translates as,

This is the cross of Sir Ivor MacEachern, sometime parson of Kilkivan, and of his son, Sir Andrew, parson of Kilchoman, who caused it to be made.

In the late medieval period, parsons were often married, and it was not unusual for a son to succeed his father as a parson. It would seem then that Ivor was the parson of Kilkavan, and was followed by his son Andrew, who later was raised to the parsonage of Kilchoman. Andrew was illegitimate and had to receive a papal dispensation to accept the living of a church.

When he was raised to the parsonage of Kilchoman a Kintyre man named Odo McKay objected on the grounds that Andrew should have required a second dispensation to hold his new office. The Papal courts agreed, and Andrew was removed from his office, and by 1393 records show McKay acting as rector of Kilchoman.

Sir Andrew MacEachern served at Kilkavan, then was promoted to Kilchoman on Islay sometime before 1376. He was removed from the living of Kilkavan around 1382. 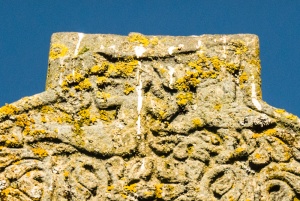 The mermaid and sea monster figures

The cross is thought to have original stood near the 13th-century chapel at Kilkavan, and been moved to Campbeltown in the 17th century to serve as a mercat cross. The same thing happened at Inveraray, where an old cross was adapted for use as a mercat cross.

We do not know exactly when the cross was moved, but it must have been after 1609 when Campbeltown became a burgh. It was certainly before 1680 when records show a criminal named Finvall McCannill sentenced to being whipped and scourged by the common executioner at the Mercat Cross in Campbeltown.

The time period is important, for this was during the turmoil of the Scottish Reformation. The cross was considered too Catholic, and a depiction of the Crucifixion on the east face of the cross was destroyed, along with the figures of 2 priests (probably the MacEachern father and son). Its transformation from a religious symbol to a mercat (market) cross is a symbol of the social upheaval and changes in attitude during the Reformation. 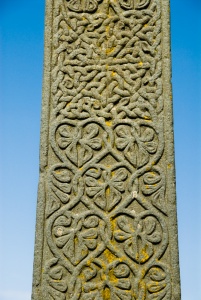 Foliage carving on
the cross shaft

It was originally set up outside the Town Hall in Market Street but was taken down for safety during WWII, then re-erected after the war in its present position near the Quay.

Who Carved the Campbeltown Cross?

Kintyre did have its own school of carving, based at Saddell Abbey, north of Campbeltown, but that school did not come into being until sometime around 1420, long after the Cross was carved. It seems most likely that the Campbeltown Cross was carved at Iona Abbey. The style of foliated cross design on the reverse face was only carved at Iona before 1500, and the foliage style is a familiar pattern used by the Iona carvers.

Old legends, now discounted, say that the cross was carried away from Iona in stealth. Other, even more fanciful legends say that St Columba himself gave the cross. Another story says that it was carried away from Iona for safety at the height of the Reformation. That doesn't make much sense, for Kintyre was heavily Protestant during the Reformation, so carrying the cross here from Iona would be like taking it out of the frying pan into the fire.

Another theory put forward by Dr Harvey Thomson is that the Campbeltown Cross and the superb standing cross ar Kilchoman on Islay were twins, carved at the same time, by the same hand. The mention of Kilchoman on the inscription does provide a link between the 2 locations, but the styles of the 2 crosses are not similar at all to my uneducated eye.

The cross stands in a traffic roundabout at the junction of Main Street and Old Quay Street, near the quay. 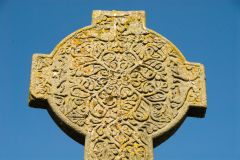 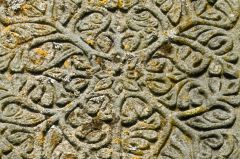 Nearby accommodation is calculated 'as the crow flies' from Campbeltown Cross. 'Nearest' may involve a long drive up and down glens or, if you are near the coast, may include a ferry ride! Please check the property map to make sure the location is right for you.

More self catering near Campbeltown Cross