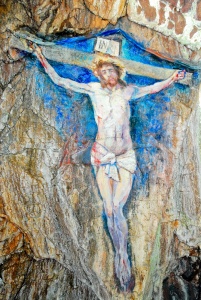 The Crucifixion painting
at Davaar

Davaar Island stands at the mouth of Campbeltown Loch, with Kildalloig Bay to the south. The island is separated from the mainland of Kintyre by a tidal causeway called the Doirlinn (or Dhorlin). The Doirlinn is a wide shingle neck of land, exposed briefly at low tide. From a parking area off Kintyre Way, east of Campbeltown, it takes about 40 minutes to make the crossing to the island on foot.

Davaar Island is known for two things. The first is a lighthouse, built in 1854 by the famous lighthouse engineers David and Thomas Stevenson. Thomas was an innovative engineer and inventor of the Stevenson screen, a protective shelter still used today for weather stations. He is best remembered today as the father of author Robert Louis Stevenson.

Beside the Stevenson lighthouse is a small building known as The Lookout. The Lookout was used during WWII as a base for naval crews who maintained anti-submarine nets across the Bay to protect Campbeltown from attack. The crews also received identification signals from ships wanting to enter the harbour. The northern tip of the island is a good spot to see basking sharks, dolphins, or even whales during the summer months.

The second famous feature on Davaar, and the one which draws visitors, is a stunning life-sized painting of the Crucifixion that decorates the interior of a sea cave on the island's south coast. The painting was the work of a local art teacher named Archibald MacKinnon, who in 1887 had a dream in which he was prompted to paint the scene. The dream also told him where to paint the scene. 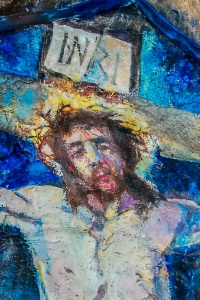 The head of Christ

The painting was discovered by fishermen, but no one knew that MacKinnon had been labouring away in secret, so the artwork was thought by locals to be a miracle; a sign from God, a divine revelation. When the story came out about the painting's true origins, MacKinnon is said to have been driven out of Campbeltown, though he returned to retouch his painting twice, once in 1902 and again in 1934.

The painting has been restored several times by art teachers from Campbeltown Grammar School, once after it was vandalised in 2007 when a caricature of Che Guevara was painted over the figure of Christ.

The art teachers installed a lead strip above the painting to minimise damage from rainwater. The original painting depicted figures on either side of Christ. Unfortunately, these secondary figures were damaged by water over time and now only the central figure of Christ remains intact.

Visitors have made the cave a place of pilgrimage over the last century, and you can see a large number of wooden crosses and small devotional cairns in and around the cave.

The Crucifixion Cave is the last of 7 sea caves that ring the southern shore of Davaar. The cave is well signposted from the end of the causeway. You just have to follow the signs along the shore.

The going is rocky and involves some scrambling, but any reasonably fit person can make the trip with ease. Allow a good 30 minutes to scramble along the shore to the cave, so that's a total of roughly 75 minutes from the mainland to the Crucifixion Cave, and an equal length of time to return.

You really do have to keep your eye on the time; when I visited I had less than an hour to photograph the cave before I had to scamper back in time to cross the causeway before the tide covered it again.

The tourist information centre at the Pier in Campbeltown has a list of tide times, so please take the time to learn exactly how long you have to spend on the island! The causeway can be used about three hours between times of high tide. The tide completely covers the causeway and it comes in very quickly, so please take care. 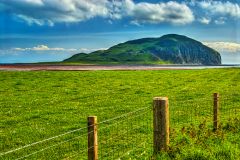 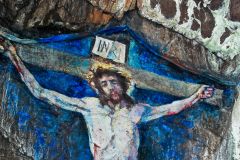 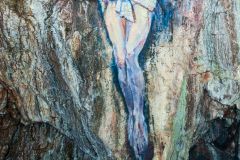 Nearby accommodation is calculated 'as the crow flies' from Davaar Island and Crucifixion Painting. 'Nearest' may involve a long drive up and down glens or, if you are near the coast, may include a ferry ride! Please check the property map to make sure the location is right for you.

Self Catering near Campbeltown