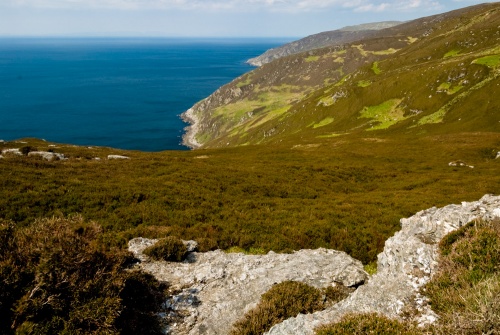 Mention Mull of Kintyre and most people immediately think of the Paul McCartney song of the same name, but there is more to this beautiful area than a song. The Mull is a rounded headland at the southwestern tip of the Kintyre peninsula.

It can be reached only by a very narrow, steep, winding road from Southend. Like many minor roads on Kintyre there is just room for one vehicle, with passing places should you be unlucky enough to meet someone coming the other direction.

The tarmac road ends at a small parking area with a sign warning 'End of Public Road'. 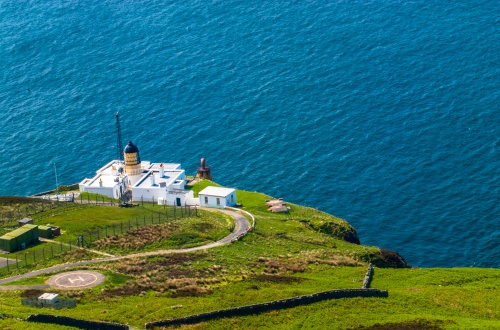 The lighthouse from above

From the parking area, you descend a series of very steep switchbacks leading to the historic lighthouse erected in 1788. The Mull of Kintyre lighthouse was one of the first to be erected by the Northern Lighthouse Board.

It was designed by Thomas Smith, Engineer to the Board. Smith's assistant was Robert Stevenson, who would go on to become one of the most successful Scottish engineers and built many more lighthouses around Scotland.

Robert was the first of a long line of Stevenson engineers who between them helped design and build most of Scotland's lighthouses during the 19th and early 20th centuries. So isolated was the Mull in 1788 that building material had to be unloaded from ships six miles away, loaded on horses and hauled over the mountains.

There was a maximum load of 1cwt per horse, and a single journey took a full day each way. The lighthouse was erected near treacherous rocks known as 'The Merchants of Three Pedlars'. The mason was George Shields, who was paid 4s 3d, which included supervising a pair of other masons. The lighthouse was rebuilt in 1821 and equipped with a foghorn in 1876. 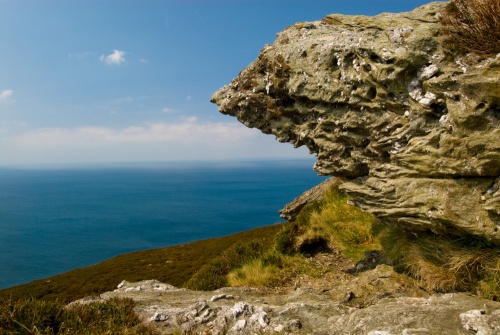 A rocky outcrop overlooking the Mull

The lighthouse as we see it now was remodelled by the famous Scottish engineer Robert Stevenson. It has been automated since 1996 and the former keepers' cottages have been converted into holiday cottages. The road leading down to the lighthouse is so steep that it seems to be on the edge of the water, but in fact, the lighthouse is perched on steep cliffs about 300 feet above the water line.

Note the closely spaced whitewashed walls surrounding the lighthouse. These were erected to protect a small vegetable plot planted by a lighthouse keeper. The only way to protect the small garden from high winds was to build windbreaks around it. From the lighthouse, you can get wonderful views along the Kintyre coast. 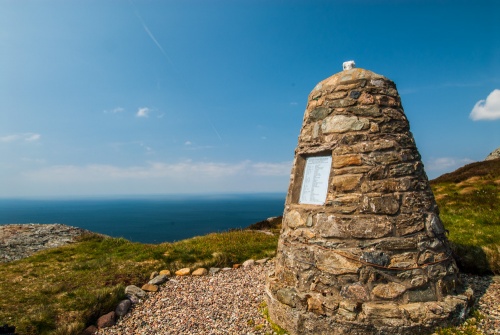 Above the lighthouse, a trail leads off along the slope of the hillside to a memorial cairn erected in memory of 29 people who lost their lives in a tragic accident in 1994, when an RAF Chinook helicopter crashed nearby. The crash is the worst peacetime disaster in RAF history.

Aboard the helicopter were 25 passengers, including senior Northern Ireland intelligence personnel. The helicopter crashed in dense fog, killing all the passengers and four crew. An enquiry initially found it impossible to establish a cause for the crash, but a subsequent RAF review blamed the pilots for flying too low and fast in foggy conditions.

This finding did not go down well, especially after technical faults were found with the Chinook design. A Parliamentary inquiry in 2001 ruled the previous judgement against the pilots to be unjustified, and in 2011 an independent review completely exonerated the crew.

It is quite moving to visit the memorial cairn; the location is stunningly beautiful in good weather, but its a reminder of just how treacherous the Mull can be when the fog descends so quickly.

If you fancy a bit of strenuous exercise you can reach the Mull of Kintyre on foot from Machrihanish, a distance of about six miles, though there is a good footpath for only the northern section of the route.

You will pass the ruined township of Balmavicar, and then skirt the Largiebaan Nature Reserve. If you are lucky you may catch sight of golden eagles. You will almost certainly see feral goats grazing on the slopes. The scenery is stunningly beautiful, with views across the Irish Sea to the Antrim coast.

You can't talk about the Mull of Kintyre without mentioning 'the song'. In 1977 Paul McCartney and his band Wings had a massive hit with a single about the Mull.

The former Beatle has owned High Park Farm, about 20 miles to the north, since 1966, and regularly visited the area for family holidays. He wrote the song with band member Denny Laine in praise of the beauty of the area. The song features bagpipes, played by the Campbeltown Pipe Band. The song was a huge hit, becoming the first UK single to sell two million copies. 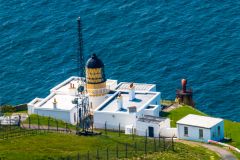 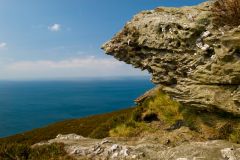 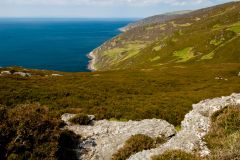 About Mull of Kintyre
Address: Southend, Kintyre, Argyll and Bute, Scotland
Attraction Type: Countryside
Location: On narrow lanes off the B842 west of Southend. Well signposted. There is a steep walk from the parking area at the end of the public road.
Location map
OS: NR588084
Photo Credit: David Ross and Britain Express

Nearest Accommodation to Mull of Kintyre:

Nearby accommodation is calculated 'as the crow flies' from Mull of Kintyre. 'Nearest' may involve a long drive up and down glens or, if you are near the coast, may include a ferry ride! Please check the property map to make sure the location is right for you.

More self catering near Mull of Kintyre

More Hotels near Mull of Kintyre

More bed and breakfasts near Mull of Kintyre