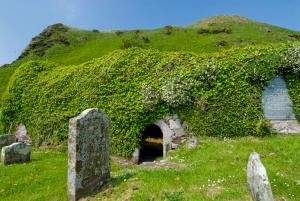 Clustered together on the rocky coast of Kintyre, south west of Southend, are 4 historic sites, 3 of which are linked to St Columba. Within easy walking distance of each other are Keil Caves, used since prehistoric times, a holy well said to have been established by St Columba, a medieval chapel, and a fascinating footprint carved into a rock, said to be the saint's.

The name Keil comes from the Gaelic 'Kilcolmkill', meaning Columba's cell, or chapel. Within the grounds of Keil cemetery, overlooking the shore at the souther tip of Kintyre, is an ivy-shrouded chapel said to have been founded by St Columba. Unfortunately for the story, the chapel is likely to date from the 13th century, but it has been built on a site closely linked to real events associated with Columba.

In AD 563 Columba and 12 followers were exiled from Antrim in Ireland. They landed here in Kintyre on the first leg of their journey that would see them spread Christianity throughout western Scotland and beyond. But did they land at Keil or further east at Dunaverty, where a fortress built by the Dalriada stood?

Just west of the chapel site is an ancient footprint carved into a rock, said to be the print of Columba's foot, and nearby is a holy well said to have been established by the saint. It seems just as likely that the footstep was carved as part of a traditional ceremony that formed part of Dalriada custom, but more on that in a moment. 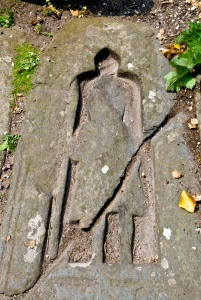 Medieval grave slab
inside the chapel

Did Columba build a chapel at Keil? It seems unlikely, for Keil was simply a landing place, the first part of his journey into exile. It seems much more plausible that the chapel was erected centuries later on a site traditionally associated with stories of Columba, where there was already a holy well and ceremonial footprint linked to the saint.

The first record of a chapel here comes from the early 14th century, when it was granted to Whithorn Priory, and we know that it served as many years as the parish church of Kilcolmkill. It ewas abandoned in the mid 18th century and is now roofless.

Carved fragments of moulding suggests that there was a chapel here in the late 12th or early 13th century, and stone from that first building was used to construct the present building later in the 13th century.

The chapel is completely covered in ivy, which looks absurdly romantic but does make it rather hard to make out the actual shape of the building. When I visited, the ivy was so thick that it almost completely obscured an open doorway into the chapel interior, and I wandered around the chapel for some time before I spotted the doorway amid the foliage and realised I could get inside!

Within the chapel are several very old grave slabs, including a medieval slab incised with the carving of a knight. Another slab is carved with the symbol of a sword, also suggesting a knight, or warrior.

Both grave slabs were probably carved at Saddell Abbey, which had a very active school of carving during the 14th and 15th centuries. There may be more, similar gravestones, but many are obscured by ivy or too worn to be recognisable.

Outside the chapel are later gravestones, including that of Ranald MacDonald, one of the very few people to survive a massacre at Dunaverty Castle in 1647. Ranald was the son of Sir Alexander MacDonald, la Royalist and leader of the castle garrison when it was besieged by a force of Campbells.

The infant Ranald was smuggled out of Dunaverty by his nurse, wrapped in a Campbell tartan to avoid suspicion. The plan worked, and Ranald survived, though most of the garrison were killed. 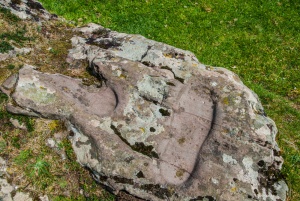 On a rocky outcrop between St Columba's Chapel and Keil Caves are a pair of footprints carved into the surface of a relatively flat rock. The footprints are reputed to be those of St Columba, who came to Kintyre around AD 563 with a dozen followers, and is said to have landed here. Columba came from Antrim, just 12 miles away across the Irish Sea.

One of the footprints, the one closest to the sea, is definitely of ancient origin, though it is impossible to say when it was carved. The other, further inland, is of recent vintage, carved in 1856 by a local stonemason named Daniel McIlreavie. It was McIlreavie who added the date '564' between the 2 footprints, though he got the date wrong by a year.

By the 6th century, Kintyre formed part of the Kingdom of Dalriada, with its centre at Dunadd, in Kilmartin Glen. At Dunadd you can still see a footprint carved into a rock. The footprint was said to have been used in ceremonies to inaugurate kings. Each landowner would bring soil from his land and place it within the footprint. The new king would place his foot upon the spoil, and the landowner would affirm his allegiance.

Did the same thing happen at Keil? If so, which came first? The tip of Kintyre was settled by members of the Scoti tribe from Ireland as early as the 2nd century. Could the Scoti, who gave their name to the nation of Scotland, have carved the first footprint as part of their system of allegiance and kingship? 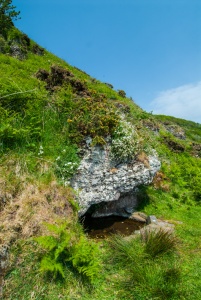 It seems a more likely explanation than the suggestion that St Columba made the footprint, but we know that Columba came here to Keil, so perhaps ascribing the footprint to Columba merely tied together an already existing tradition with the spread of Christianity. Curiously, both carvings depict right feet, so when McIlreavie carved a new foot he did not make a set, but a second right foot.

The Royal Commission on the Ancient and Historical Monuments of Scotland (RCAHMS) adds a different twist to the story. They say that the older footprint may be as old as the end of the 1st millennium BC, long before the coming of the Scoti and the Kingdom of Dalroiada. If so, what purpose did it serve?

Just inland of the footprints is a well set into the rocky cliff, on the line of the old coastal trail that runs just inland of the churchyard boundary. The well is also ascribed to St Columba, and its waters are said to have healing properties. A basin has been carved into the rocky slope to collect water from a spring, and on the rock face that overhangs the basin a crude Latin cross has been carved.

The well is outside the churchyard which seems odd if it really was linked to Columba. It is just as likely that the link to St Columba was a fabrication of locals pandering to the tourists who began to flock to Keil in the 19th century. It certainly adds another layer of interest to an already fascinating site!

Excavations suggest that Keil Caves were inhabited in early prehistoric times, for piles of shells have been found, and we know that one of the caves was used as a residence as recently as 1881. A census report from that year shows that two families lived in the caves, with a total of six people.

One of the caves is called Piper's Cave, and takes its name from a legend that a bagpipe player disappeared while on his way home past the caves one dark night. The legend says that you can sometimes hear the lonely sound of ghostly pipes playing.

Legends apart, the caves are extremely basic openings in the rock face. It is truly hard to imagine anyone living here today, but they certainly are atmospheric, and provide a link between the ancient past and the more relatively recent stories of St Columba.

Another interesting part of the story at Keil emerged (literally) in 1968, when fragmentary remains of a wheelhead cross were discovered on the foreshore. The cross was only visible at low tide, and was found almost directly opposite the chapel.

On the headland near St Columba's Footprints a socket was found cut into a stone, which seems to fit the cross base. So the cross appears to have stood on the cliffs, and at some point was broken up and thrown into the sea, presumably during the Reformation. The cross fragments can now be seen at Campeltown Museum.

The historic sites at Keil make for a fascinating visit. The ruined chapel alone would be worth a visit, but the carved footprints and holy well add an extra bit of historical intrigue. The sites are well signposted, and located within a few minutes walk of each other. I also recommend a trip to Dunaverty Castle, just a mile away. 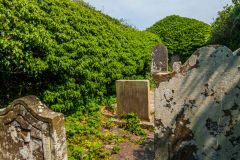 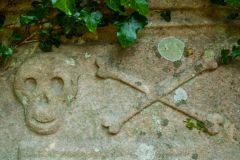 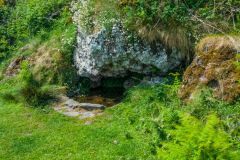 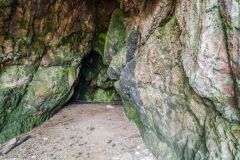 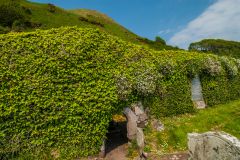 Nearby accommodation is calculated 'as the crow flies' from St Columba's Chapel, Holy Well, & Footprints. 'Nearest' may involve a long drive up and down glens or, if you are near the coast, may include a ferry ride! Please check the property map to make sure the location is right for you.