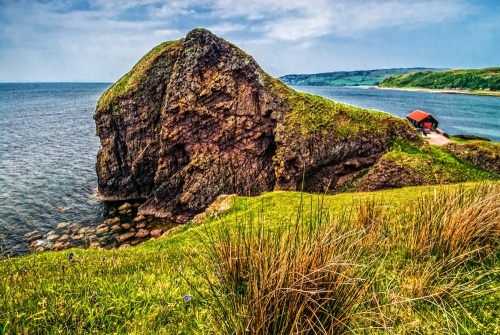 On the southern tip of Kintyre is a rocky headland, linked to the mainland by a narrow neck of land. On the headland stands the ruinous remains of a once important fort owned by Clan Donald.

The first record of a fort at Dunaverty comes from the 8th century, when it was owned by Gabran, the grandson of Fergus of Dalriada.

The history of Dunaverty is a bewildering mix of alliances made and broken. In 1248 Walte Bissett seized the castle, and fortified it against the crown. Bissett was aided by Henry III of England, who was furious that Alexander II of Scotland was giving aide to English pirates. However, Bissett's rebellion did not last and Dunaverty was captured that same year by Allan, son of the Earl of Atholl.

Alexander III garrisoned Dunaverty against a Norse invasion in 1263, but the Norse king Haakon IV captured it and gave it to one of his supporters, Dugald MacRuairi. From MacRuairi the castle passed to Alexander MacDonald of Islay, and for the next several centuries it remained in MacDonald hands.

Robert Bruce is said to have sheltered at Dunaverty while fleeing his enemies. Bruce soon fled further west to Ireland, but Edward I ordered Sir Henry de Percy to besiege the castle, which soon surrendered.

In 1493 James IV seized the castle and installed a royal garrison. While the king was marching away Sir John MacDonald recaptured the castle and had the castle governor hung over the parapets while the royal army was still within sight. MacDonald's act of defiance was in vain; he was captured and hanged at Edinburgh.

The castle remained in royal hands through the 16th century, and was rebuilt and strengthened several times. The castle was granted to the Earl of Argyll in 1626.

Now comes the darkest hour in Dunaverty's long history. In 1647 the Royalist garrison of Dunaverty was besieged by a Covenanter force led by General David Leslie. Most of Leslie's army was made up of Campbells, traditional enemies of the MacDonalds. The castle garrison was led by Sir Alexander MacDonald and including a large number of MacDougalls. MacDonald's infant son Ranald was smuggled out of the besieged castle, wrapped in a Campbell tartan. 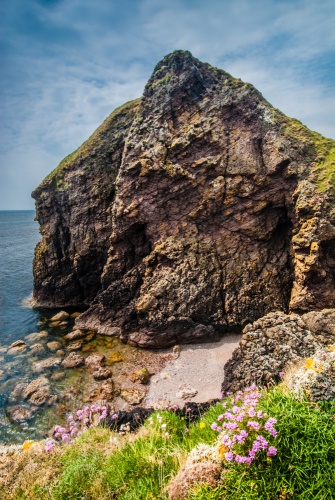 The Covenanters captured the castle's water supply, and it was only a matter of time before the garrison of roughly 300 men was forced to surrender. They asked for and received a guarantee of safe surrender. They laid down their arms and left the castle, but then things got very ugly. Archibald Campbell, 1st Marquess of Argyll, and General Leslie's chaplain, Rev. John Naves, insisted that the garrison, including their women and children, be put to the sword.

Accounts of the massacre differ. Most say that the Royalists were promised quarter and received assurances that they would be safe if they laid down their arms. If true, they were cruelly deceived. After leaving the safety of the castle the unarmed garrison and all their followers were slaughtered.

As many as 300 women and children were amongst the slain. Only four people, including the infant Ranald MacDonald, are known to have survived or been spared. One account says that the garrison were thrown over the cliffs into the sea.

Who was responsible for the massacre? While blame must ultimately rest on General Leslie, it seems that he was urged on by Rev John Naves, or Nevoy. Reverend Naves was insistent that no quarter should be given and reportedly threatened Leslie with curses if he should fail to kill the garrison. In a strange twist, General Leslie later changed sides and fought for the Royalist cause.

The fort was built on a naturally strong position, with steep cliffs on three sides. The only way to reach the castle headland is from the north, where the land dips down to a narrow path and then rises up again to the castle itself. Historical records show that the castle could only be accessed over a drawbridge.

Very little masonry can be found on the east and west sides of the headland, where the cliffs are at their most precipitous, but at the south west end of the promontory is a short section of curtain wall, and more of the wall is visible on the north-west side, where it encloses a small, levelled area. A rock-cut depression in this level area may be the remains of a well.

The summit of the headland is quite small, so the defences would have been very cramped. From the summit a rough stair was cut in the solid rock to give access to the north west platform. At the eastern end of the summit is a small chamber, partly cut into the underlying rock. No other traces of the castle can found on the summit.

In truth, the remains of Dunaverty Castle are paltry, and would not ordinarily be worth a visit were it not for the history of the site. The massacre on 1647 gives the ruinous site a macabre interest. It is a fabulous location, and it is easy to imagine how dramatic a fortress perched on the rocky headland would have appeared.

Nearby accommodation is calculated 'as the crow flies' from Dunaverty Castle. 'Nearest' may involve a long drive up and down glens or, if you are near the coast, may include a ferry ride! Please check the property map to make sure the location is right for you.

More self catering near Dunaverty Castle