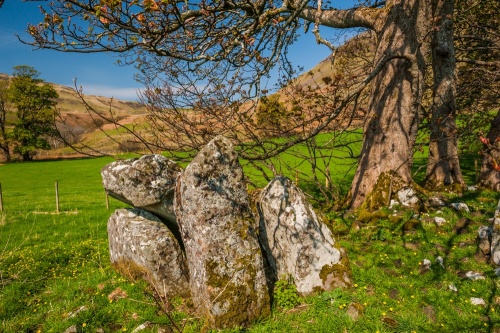 Camas nan Geall (Bay of Strangers) is a semi-circular bay on the south coast of the Ardnamurchan peninsula just west of Glenborrodale nature reserve. The relatively flat area above the small beach boats several intriguing historic monuments including an 18th-century burial ground for the Campbells of Ardslignish and a late Neolithic standing stone carved with an early Christian cross.

A stone's through from the burial ground, along the farm track leading to the foreshore, is a ruinous Neolithic chambered cairn. 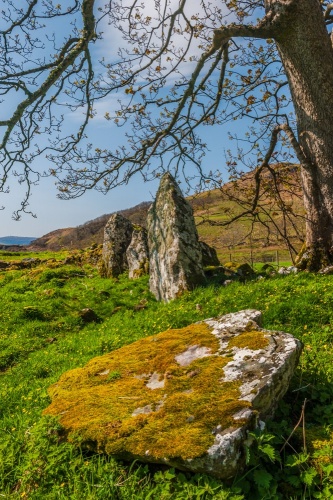 You can still see parts of the burial chamber but many of the original cairn stones have been robbed for use on later buildings.

The cairn is aligned roughly on a northwest/southeast axis. You can still see parts of the NE horn of the burial chamber facade, which still stands to 1m high in places. Part of the cairn has been destroyed by the farm track that runs directly past it.

You enter the chamber through a pair of portal stones. The SW stone stands to 1.8m high. Two side slabs still stand, at 1.4m and 1m high respectively. The capstone has fallen and is now propped against the SW side slab. 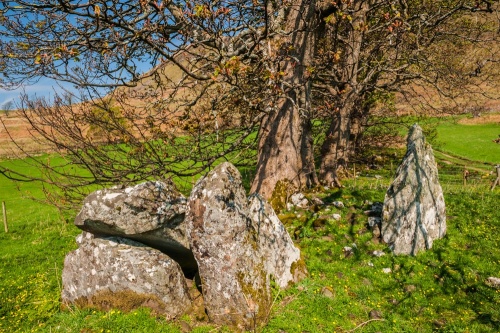 The chamber now measures roughly 1.8m long x 1.2m wide, but it would originally have extended much further to the NW. Archaeologists surmise that the horned facade would have stretched 18m across and 10m deep.

Accurately dating ancient sites is problematic, but the Camas nan Geall chambered cairn was probably erected between 3000-2000 BC.

What makes this site so interesting is that it stands so close to the Campbell's burial ground and the Neolithic standing stone with its early Christian carvings. The combination of these diverse monuments brings home just how long humans have occupied this area of the Highlands. 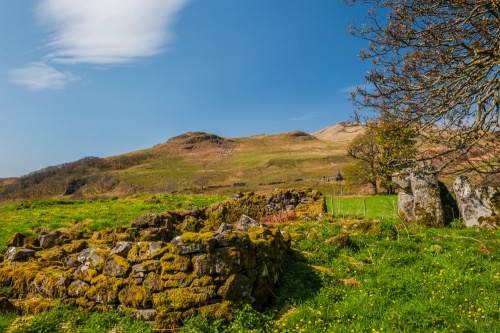 A ruined township cottage stands beside the cairn 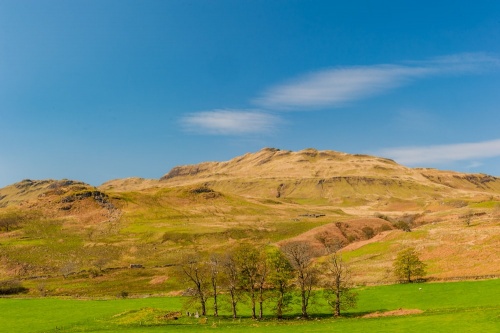 The cairn from the B8007 parking area

There is an obvious parking area on the B8007 coast road between Glenborrodale and Kilchoan. A farm track loops around the top of the bay then drops down to the level land above the foreshore.

The chambered cairn is within a fenced enclosure overlooked by a copse of trees. It stands immediately beside the ruins of a traditional stone cottage and a very short distance from the burial ground and standing stone.

Nearby accommodation is calculated 'as the crow flies' from Camas nan Geall Chambered Cairn. 'Nearest' may involve a long drive up and down glens or, if you are near the coast, may include a ferry ride! Please check the property map to make sure the location is right for you.