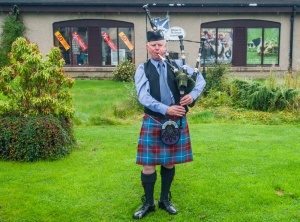 A piper plays at the Scottish
Woollen Centre in Aberfoyle

Aberfoyle is the western gateway to the Trossachs and one of the most popular destinations for visitors. Aberfoyle boasts several attractions, but it is its proximity to some of the finest scenery and walking trails that bring many visitors here. In the town is a Scottish woollen centre, with clothing outlet shops featuring Scottish tartans.

The most famous - or infamous, depending on your point of view - resident of Aberfoyle was 17th-century clergyman Robert Kirk. Kirk was an eccentric gentleman, to say the least. He believed in the existence of a peculiar world on the fringes of our own, filled with goblins, faeries, and other magical creatures.

In 1693 he wrote a book, entitled, The Secret Commonwealth of Elves, Fauns and Fairies. Kirk hypothesized that a sacred place among the faeries was Doon Hill, sometimes called Fairy Knowe. This low, conical hill can easily be seen from Aberfoyle. 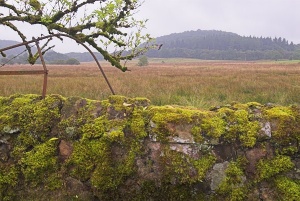 Doon Hill, or 'Fairy Knowe',
from the churchyard in Aberfoyle

The tale goes that the faeries were so angry with Kirk for disclosing their secrets to the world at large that they captured him while he was walking on Doon Hill. The faeries took Kirk away to their realm and left a changeling in human form in his place.

This changeling was buried in the churchyard, where the Reverend Kirk's grave can be found beside the roofless ruins of the old kirk on the southern outskirts of Aberfoyle, facing Doon Hill across the fields. A pine tree at the summit of Doon Hill is said to contain Kirk's spirit. Doon Hill is also suggested as the site of a late 6th-century fort built by Aedan, Prince of Forth.

The old town of Aberfoyle was south of the River Forth, in the area now known as Kirkton. The town moved north of the river, with the result that several of the older buildings are well away from the town centre. One of these is Kirkton church. This was built in 1744, but it is now a roofless ruin, open to the sky.

In front of the open doors of the church are two cast-iron coffin, or 'mort safes'. These historic oddities date back to the early 19th century when grave robbing was common. Bodysnatchers would dig up recently deceased corpses and sell them to doctors or medical students, who used the corpse in dissection experiments.

To combat this practice, relatives of the deceased entombed the body in heavy mort safes. Behind the church is the tomb of Reverend Robert Kirk, mentioned above. 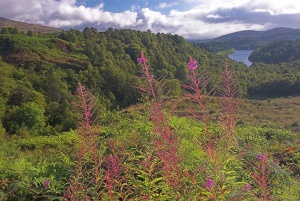 The view from the Duke's Pass

The Duke's Pass - 'A road built by tourism'

When Sir Walter Scott published his Arthurian poem 'The Lady of the Lake' in 1810, it proved so popular that it resulted in a large influx of visitors to the area.

To cope with the numbers of visitors and provide better access to Loch Katrine and the southern Trossachs, the Duke of Montrose decided to build a road north from Aberfoyle, through the Queen Elizabeth Forest Park, to Brig O' Turk, Loch Achray and Loch Katrine. This road winds its way through a gap in the hills, which has gained the moniker, 'The 'Duke's Pass'.

The road, now the A821, only climbs to 775 feet, but it offers superb views to the peaks of the Trossachs, and north to the Highlands. At roughly the midway point of the pass a scenic drive called The Three Lochs Forest Drive branches off to the east.

This [seasonal] forest drive takes in 7.5 miles of winding road, passing Loch Drunkie, Loch Reoidhte, and Loch Venachar before rejoining the A821 near Kilmahog. It should take 45 minutes to complete. If you opt to miss the forest drive, the A821 drops down to Loch Achray, offering wonderful views of the castellated Tigh Mor across the loch. 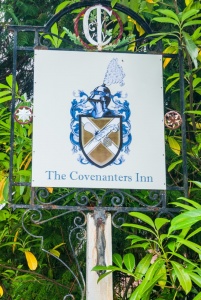 At the southern end of the Duke's Pass road, barely a mile north of Aberfoyle, is the David Marshall Lodge Visitor Centre. Here several popular walking and cycling trails branch out throughout the Queen Elizabeth Forest Park.

This is a popular stopping place for families, and the Visitor Centre offers maps and guidelines for exploring the area. If the weather is clear you will be rewarded with spectacular views across Loch Ard to Ben Lomond.

A short, easy, path from the visitor centre leads to one of the most visited scenic sites in the Trossachs, Little Fawn Waterfall. Despite the name, the falls appear anything but little and are quite a spectacular sight in their wooded setting. Further trails take in more of the forest, with special attention to the flora and fauna of the area.

On the southern outskirts of Aberfoyle is the Covenanters Inn, now called the Inchrie Castle Hotel. It was here in 1949 that delegates met at a Scottish Convention. The result of the Convention was the launch of the Scottish Covenant, which over the next year gathered over 2 million signatures supporting self-government for Scotland. The launch of the Covenant is regarded as one of the landmark events in the process of reclaiming Scottish political independence.

From Aberfoyle, there is a lovely driving route that we can highly recommend.

From the centre of Aberfoyle head west on the B829, signposted Inversnaid, following the shore of Loch Ard through wooded hills to Inversnaid on the shores of Loch Lomond. A mile from Inversnaid is Rob Roy's View.

A short path leads from a forestry commission parking lot, through a plantation to a viewpoint high above Loch Lomond. The views are superb and well worth the climb. At Inversnaid the river tumbles down to the loch, forming the Falls of Inversnaid. A nature trail leads along the shore of Loch Lomond to the north. This is a lovely, remote spot, perfect for an afternoon tea.

More self catering near Aberfoyle

More bed and breakfasts near Aberfoyle