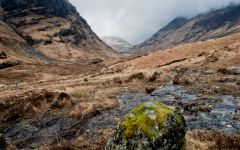 When the Protestant King William took the throne of England following the ouster of James VII and II, he knew that to prevent further trouble he needed to exert some measure of royal control over the Highlands. He ordered all the Highland clans to swear an oath of loyalty by New Year's Day, 1692. The clan chiefs were troubled, for they had previously sworn an oath to defend King James.

So, rather than immediately swear the new oath of loyalty, they sent a message to James in France asking to be released from their obligations. James agreed to release them, but his reply did not reach the Highlands until December 1691. This left the clan chiefs very little time to reach the sheriffs and take the new oath.

One chief, Alisdair MacDonald of Glencoe, went to Fort William to take his oath, only to find the sheriff gone. He went on to Inverary, arriving on 3 January. The deputy sheriff refused to take his oath until 6 January. Now, you might think that a matter of a few days one way or the other was not important. But in this case, the English government decided that they needed to make an example of the MacDonalds and deter any other acts of resistance.

A regiment of Argyll's army travelled to Glencoe. They took shelter with the MacDonalds and shared their food and drink. Then, as day broke, the troops rose from their beds and attacked their hosts. Around 38 were killed in their beds, but many more died of exposure after fleeing into the heavy snows of Glencoe.

Aftermath
There was much finger-pointing and blame-casting after the Glencoe Massacre. A few scapegoats wee found, but in truth, the government was quite happy with the outcome of Glencoe; though the horror of the massacre raised opposition in Scotland, and even today can raise strong feelings, the eventual outcome was that the Highlanders were less willing to be openly rebellious against the English crown. 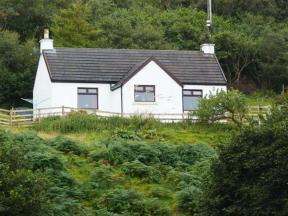 This cosy single-storey cottage is in the isolated hamlet of Portuairk near Kilchoan on the western end of the Ardnamurchan Peninsula, and sleeps up to three people in one bedroom.
Sleeps 2 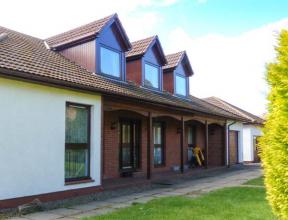 This apartment set across the first floor in the village of Morar, near Mallaig in west Scotland, sleeps five people in three bedrooms.
Sleeps 5