Gardens to visit in Carmarthenshire 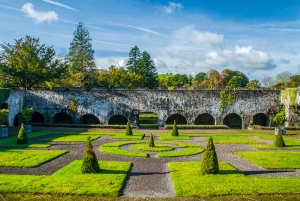 Aberglasney
At Llangathen off the A40 in the Tywi Valley, Carmarthenshire.Email: info@aberglasney.org.uk. Small tearoom on site.
A garden "lost in time", in the process of restoration. One of the interesting features is a yew tunnel planted in the 18th century. A cloister garden parapet allows you to walk along the top of the walls for views over the garden below. More photos of Aberglasney Gardens.

National Botanic Garden of Wales
Off the B4310 at Middleton Hall, Llanarthne, Carmarthenshire.
An educational facility for research, sustainability and conservation. The centrepiece of the garden is the Great Glasshouse-the largest single-span glasshouse in the world at 328-ft (100m) long and 164-ft (50m) wide. 17,000 herbaceous plants run parallel to the wall of the 200-year-old double-walled garden. A restaurant and shop are on the premises.

Paxton's Tower
On the B4300 from Llanarthne, Carmarthenshire. National Trust.
Early 1800's banqueting hall with views over the Tywi valley.