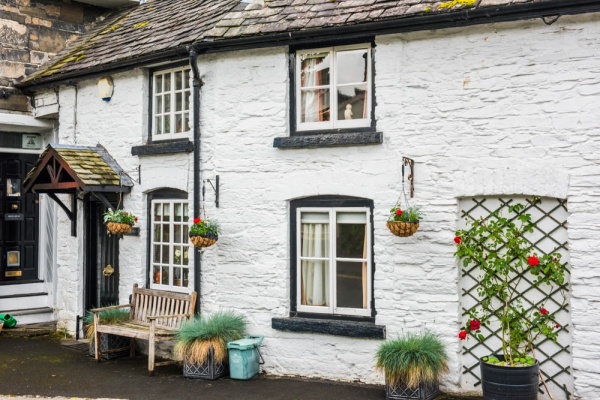 A pretty stone cottage in Rhayader

Rhayader is a pretty market town set in a wonderfully scenic area in the upper Wye Valley. It is the first town on the River Wye and was once the administrative centre for Radnorshire.

The town's Welsh name is Rhaeadr Gwy, which translates as 'Cataract on the Wye'. That might be initially confusing as the only waterfalls are quite minor ones. The main waterfall, once described as 'Niagara in miniature', was destroyed in 1780 when the first bridge across the River Wye was erected at the western edge of town.

According to legend, the rivers Wye, Severn and Ystwyth decided amongst themselves which was the best route to the sea. The Wye chose the most scenic route, and it would be hard to argue that the meandering river runs through stunningly beautiful scenery. The Wye Valley Walk long-distance trail follows the river for 136 miles from its source in the Cambrian Mountains to the sea at Chepstow.

The Wye is not the only river closely linked to Rhayader's heritage; the River Bwgy flowed through the town and emptied into the Wye near Mill Street. A local tradition holds that anyone who dipped their feet in the river would always return to Rhayader. But where is the river? It was channelled into underground pipes in 1877, but even today natives of Rhayader are known as Bwgyites.

The town thrives on agriculture, and regular sheep and cattle markets are still held. 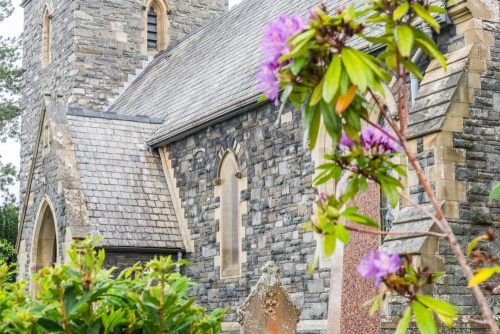 This area of Wales was settled as early as the Bronze Age. The most striking evidence of early settlers is a collection of gold jewellery discovered on Gwastedyn Hill in 1899. The collection, now in the British Museum in London, is traditionally thought to have belonged to a Celtic princess named Rowena.

The Romans passed through Rhayader but do not seem to have made a permanent settlement. The earliest recorded history comes from the 12th century when the local Welsh princes and the Norman barons battled for control of the area.

One of those barons was Roger de Mortimer, Earl of Wigmore. In 1277 the Earl's men ambushed and killed a pair of local princes at Maenserth, just two miles away. Lord Rhys, Prince of Deheubarth, immediately built a motte and bailey castle to defend a crossing of the River Wye. For the next two centuries, the Welsh and English battled for control of Rhayader Castle. It was captured and recaptured, destroyed and rebuilt until it finally fell out of use in the 14th century.

By that time a settlement had grown up around the castle and become prosperous enough to hold a regular market and an annual fair. In 1536 the Act of Union created the new county of Radnorshire, with a Shire Court established at Rhayader.

The town's future as an administrative centre seemed assured, but it was not to last. A band of outlaws attacked and killed a Shire Court judge on his way to the church in Rhayader. That violent act convinced the authorities that Rhayader was too lawless a lace for important people like judges and the Shire Court was transferred to Presteigne.

Rhayader gradually established itself as a market town, and later as an important stopover on the coaching route linking London and Aberystwyth. The coming of the railway in 1862 changed Rhayader overnight, but what ultimately made an even bigger impact was the building of the Elan Valley dams from 1894-1904. 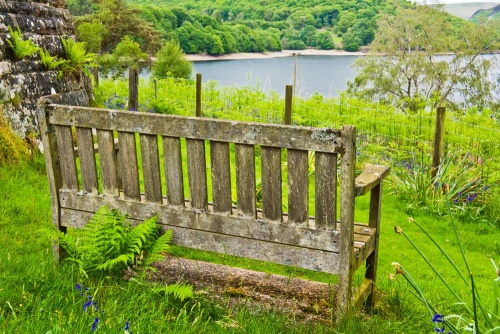 Looking over an Elan Valley reservoir

A few miles west of Rhayader is the Elan Valley, where Victorian engineers built a series of dams to create reservoirs that could supply water to the city of Birmingham some 70 miles away. The Elan Valley dams were considered one of the most impressive engineering feats of the 19th century.

The Elan Valley engineering project transformed Rhayader. First came the labourers who worked on the dams. Then new houses and shops were built to cater to the tourists that thronged to marvel at the dams. Today you can explore the dams and the surrounding woodlands which have been transformed into a recreational area with opportunities to enjoy walking, pony trekking, bird watching, and fishing.

What follows is a mini-tour of some of the more interesting historic buildings in Rhayader. The tour is based on the excellent Town Trail leaflet published by the town website and available at many local outlets. The tour begins in the centre of Rhayader, at the junction of the A470 and A44.

At the meeting of East, North, West, and South Streets stands this attractive 17th-century timber-framed shop, now a Grade II listed building. The shop looks across to Rhayader's iconic Town Clock in the centre of the junction. The Town Clock was built on the site of the old Market Hall to act as a war memorial for the dead of both world wars. 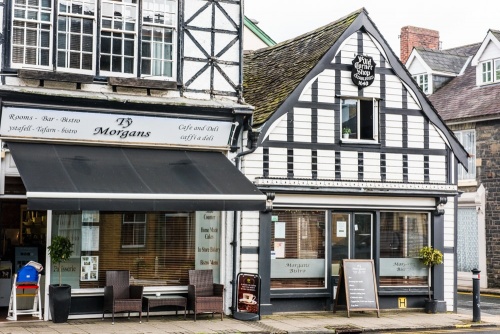 On South Street is the tollhouse erected to exact a fee from all road traffic entering Rhayader. The tolls caused enormous hardship to local farmers. In 1843 their resentment exploded in the 'Rebecca' riots, when men dressed in women's clothing destroyed seven tollgates in the Rhayader area. A commission of enquiry was held and many of the farmer's grievances were addressed.

Almost opposite the Toll House is Penralley House, an elegant Georgian building. Look for the pineapples incorporated into the iron railings. The pineapple was considered a symbol of hospitality in the 18th century. 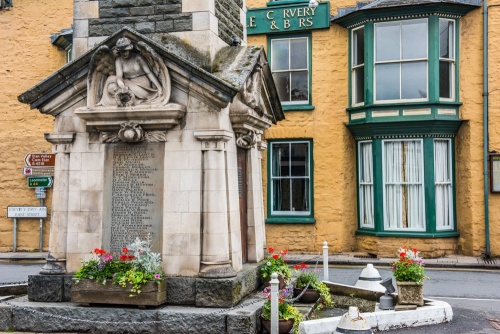 At the corner of South Street and West Street is the Old Swan, built in 1683. Look for a gargoyle carved on the inn's exterior.

On West Street is this old coaching inn. The striking arched gates in the inn's facade came from the old Market Hall. One of the arches opposite has some original wooden cobbles, installed to muffle the sound of horse's hooves.

An attractive early 17th-century inn with a weatherboarded exterior. Opposite is the Old Police Station & Courthouse, built in 1870 and housing the local courts of justice until the 1990s.

Built in 1688 and one of the first Congregational Chapels in Radnorshire. The chapel is thought to stand on the site of the town gaol. Local tradition suggests that an underground tunnel leads from the Chapel to Tower House.

Thought to stand on the site of the Rhayader Castle entrance. A passage linked it to the castle. Once an inn, Tower House also served as a Court Leet. Look for a timber beam carved with the date 1766. From Tower House, you can stroll down Water Lane to the original ford across the River Wye.

At the extreme western edge of Rhayader is The Bridge, linking the parishes of Rhayader to the east with Cwmdauddwr to the west. Local residents used to wash their laundry in the river at the base of the bridge.

Just over the bridge is a public car park and behind a wall at the back of the parking area are the remains of an early medieval motte and bailey castle. Opposite the car park is the Old School, founded in 1794. Look for the Triangle Inn, dating to the 16th century. The inn's original name was Tafarn-y-Rhyd, which translates as The Tavern on the Ford.

Overlooking the river is the site of a 12th-century castle probably built by Lord Rhys of Deheubarth to counter the threat of a Norman incursion. The castle was captured and recaptured multiple times by the English and Welsh. In 1231 Llewelyn the Great captured the castle and put the entire garrison to the sword. The castle eventually fell out of use in the 14th century and all that remains today is a deep dry moat. The castle site has been cleared to create a pleasant public space with picnic tables. 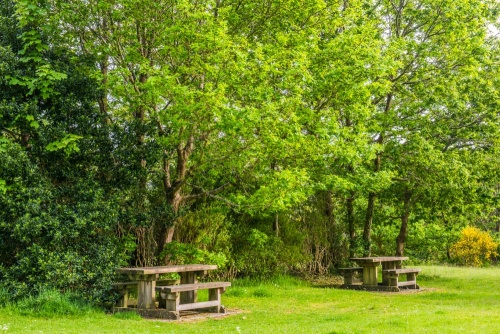 A short walk east from the centre of town brings you to this delightful small museum dedicated to the heritage of Rhayader and the surrounding area. Each display looks at a different aspect of life, from the building of the Elan Valley dams to Celtic and Roman jewellery. See ceramics, glass, jewellery and textiles made by local artists, old photos, and objects from daily life. The museum is run by local volunteers. 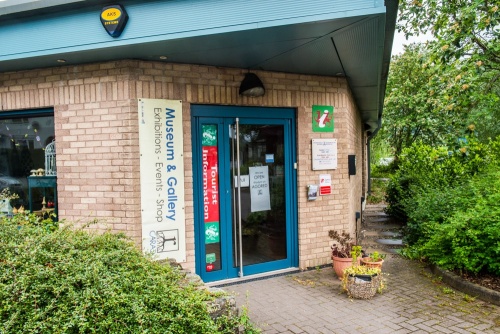 The 19th-century parish church stands on the site of a medieval church used by the garrison of Rhayader Castle. When the tower was being rebuilt in the late 18th century a mass grave was discovered, full of skeletons thought to be garrison soldiers killed by Llewelyn the Great in 1231. One of the skeletons had a huge thigh bone, and so the burial place was dubbed the 'Giant's Grave'. Inside the church is an early medieval font carved with four human heads.

Just uphill from the church is Tanners Row. Many of the workers labouring to build the Elan Valley dams stayed here, and on a Saturday night their boisterous behaviour gained it the nickname Hell Fire Square.

Just over the bridge from Rhayader is St Bride's church, a Victorian building on the site of a much earlier medieval building. Only traces of the medieval church remain, though in the porch is a worn early medieval holy water stoup carved with crude human heads. John Wesley preached here in 1746 and in the church is a plaque commemorating the Victorian mountaineer Emmeline Lewis-Lloyd, the 8th woman to climb Mont Blanc. 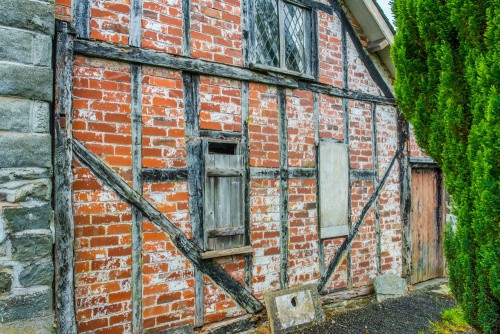 A 17th-century timber-framed cottage beside the churchyard

On the eastern edge of Rhayader is Welsh Royal Crystal, where traditional handcrafting techniques are still practised to create crystal objects of the highest quality. Watch artisans hand-blowing glass to create crystal ware incorporating Celtic and traditional designs. Visitors can enjoy a guided tour of the workshops led by a Master Craftsman.

Six miles outside Rhayader is Abbey Cwm Hir Hall, a sumptuous Victorian Gothic Revival mansion overlooking the ruins of a 12th-century Abbey. The mansion boasts 52 rooms, one for each week of the year, and the rooms are stuffed to overflowing with collectables. The mansion stands in a spectacular 12 acres of landscaped grounds incorporating walled garden, a lake, waterfall, and woodland walks.

The Abbey itself was built by the Cistercian order in 1176 and boasted one of the largest naves in Britain. Llewelyn ap Gruffydd (Llywelyn the Last) was buried here after he was killed at nearby Climeri in 1282. Only the ruinous nave of the abbey church remains, and you can see a black slate memorial to Llewelyn near the east end of the church.

A bit further afield is Aberystwyth, reached by a scenic mountain road that has been voted one of the top 10 most scenic routes in Britain. 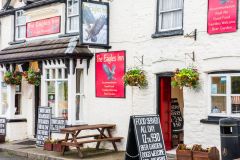 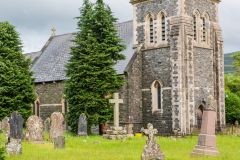 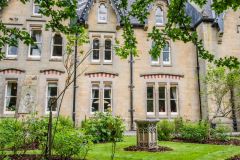 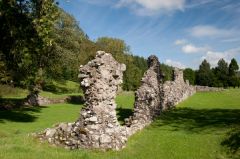 More self catering near Rhayader

More bed and breakfasts near Rhayader