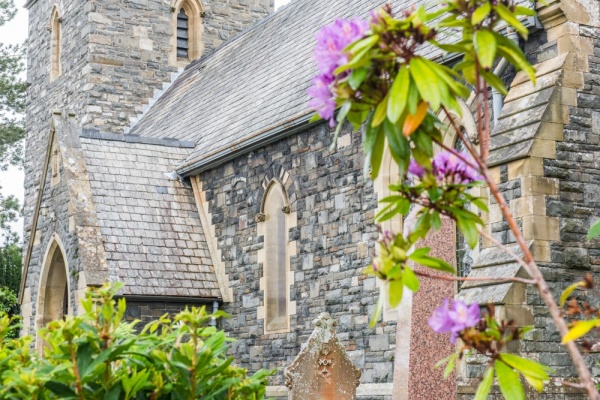 On high ground overlooking the River Wye in Rhayader stands the medieval parish church of St Clement. The dedication to Clement is perhaps misleading; it appears that the original dedication was to Cynllo, a 5th-century Welsh saint whose feast day is on 17 July.

That dedication also suggests that the church's origin is much earlier than it at first glance appears. The church almost certainly was founded in the Dark Ages. It was later a part of nearby Rhayader Castle, or, as some accounts have it, it was built on the site of an earlier garrison church. It was in existence by at least 1291 for in that year it was recorded in the Taxatio as 'Ecclesia de Raedr' (Rhayader church).

The medieval church collapsed in 1772 and was rebuilt on a rectangular plan, with the west tower added in 1783. 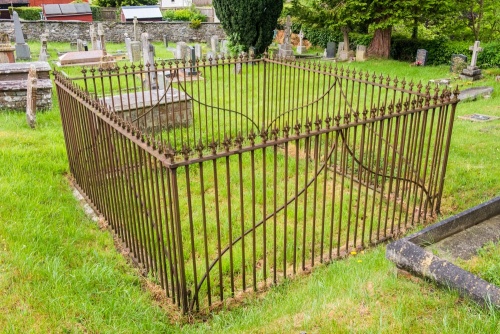 In the churchyard, near the west tower, is a large railed enclosure. This marks the site of a mass grave discovered during the construction of the tower. The dead are thought to have been the unfortunate garrison of Rhayader Castle who were killed to a man by Llywelyn ap Iorwerth when he captured the castle in 1231.

One of the skeletons had an enormous thighbone measured at over a metre in length. The thighbone is said to have been that of the castle's commanding officer. Because of its huge size, the mass grave where the skeletons were reburied is sometimes known as The Giant's Grave'. 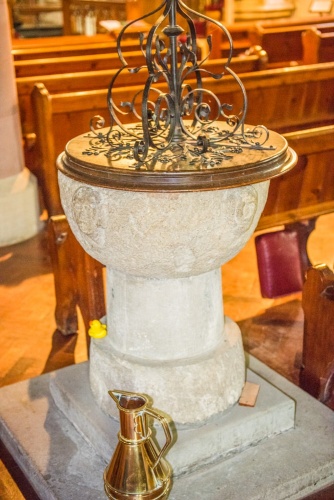 Though the church's origins are ancient much of what we see today is the result of a comprehensive rebuilding from 1887-1897. The oldest historical feature to survive the rebuilding is an early medieval font with a simple circular bowl atop a cylindrical stem. The font bowl is carved with four very worn faces that project from the stone.

Almost all the other furnishings are late Victorian, including a stone pulpit in Gothic style and a beautifully carved wooden parclose screen. In the tower is a Benefaction board of 1810. There are few memorials, but we did spot a 1929 brass plaque to Clara Joan, Lady Adye, wife of Major-General Sir John Adye KCMG, CB, Royal artillery.

There are several very good 19th and early 20th-century stained glass windows, including a WWI memorial window depicting a knight with a broken lance and the caption 'Pro Patria' (for one's country).

St Clements is a beautiful historic building with a fascinating if somewhat dimly illuminated past. The church was open when we visited (though we just had time to explore before a very friendly churchwarden arrived to lock up the church for the day. He was happy to tell me about the church's history and show me the Giant's Grave. 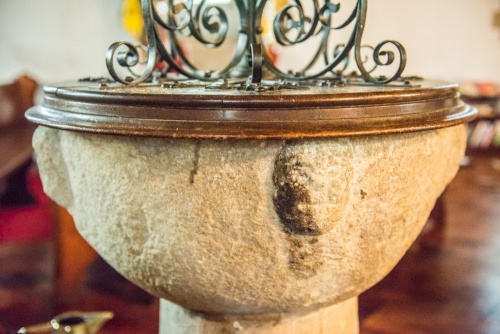 A carved face on the font bowl

The church is very easy to reach from central Rhayader. It stands on the west side of Church Street just a short stroll north from the crossroads in the centre of town. 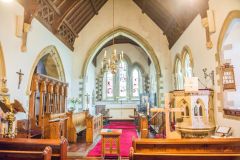 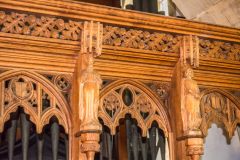 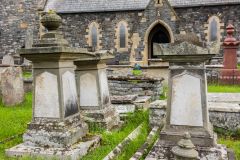