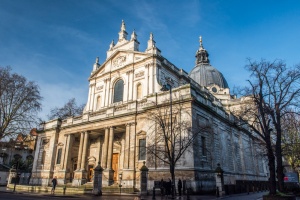 This extraordinary Roman Catholic church is actually the Oratory of St Philip Neri, but it is more commonly, though inaccurately, called the Brompton Oratory. The structure was begun in 1878 and the remarkable dome completed by 1896 in flamboyant Baroque style. The nave is exceeded in width only by Westminster Abbey and York Minster.

The Oratory is the British headquarters of the Catholic Oratorian order, founded by Filippo Neri, and the unabashed Italian style of the architecture and ebullient design is entirely intentional.

The architect of the Oratory, Herbert Gribble, intended the church to offer an example to those who were unable to see an Italian church for themselves. One would have to say that he succeeded admirably, for the London Oratory is quite unique in Britain in its use of decorative colour and structure.

As remarkable as the Oratory is to the eye of the beholder, it seems equally remarkable that Gribble was selected as the architect of the church. At the time the Oratorians decided to build a new church in Brompton, Gribble was an untried architect of only 28 years, yet he had the favour of the Duke of Norfolk, who acted as his patron.

In 1879 Gribble's plan for a permanent church to replace the order's temporary quarters won an architectural competition and the young architect was thrust into the limelight. 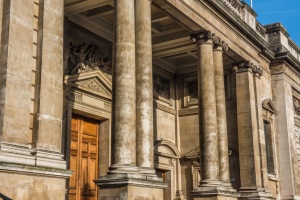 The core of the church was built from 1880-1884, and the entrance and outer dome followed over the next dozen years. Gribble died prematurely in 1894 and the dome was completed by George Sherrin. The resulting church towers magnificently over its surroundings, quite overwhelming the nearby Anglican church of Holy Trinity by comparison.

As impressive as the interior of the London Oratory is to behold, it is the extraordinary interior that causes the observer's breath to catch in his or her throat. Here the Italian influence is at its greatest. Much of the interior decoration is of 20th-century provenance and is not as Gribble intended.

The lavishly gilded nave and dome mosaics are the work of Commendatore Formilli (1927-32). Though the dome is striking, it is the pulpit that catches the eye first; this baroque wonder seems alive with flowing lines and extravagant decoration quite seldom seen in British churches.

Though the church is primarily 19th century, it contains much older elements. The figures of the 12 apostles in the nave were carved for Siena cathedral in 1680 and the Lady Chapel boasts an altar and reredos from the late 17th century. Taken as a whole, the London Oratory is an extraordinary architectural monument, made even more remarkable by the fact that such enthusiastic Italian style is so rarely seen in Britain.

The church is usually open to visitors, though unfortunately interior photography is not permitted, so we can't share photos of the extraordinary interiors. The Oratory is immediately beside the Victoria and Albert Museum and makes a wonderful, peaceful refuge after visiting the often-crowded museums of South Kensington.

More self catering near London Oratory