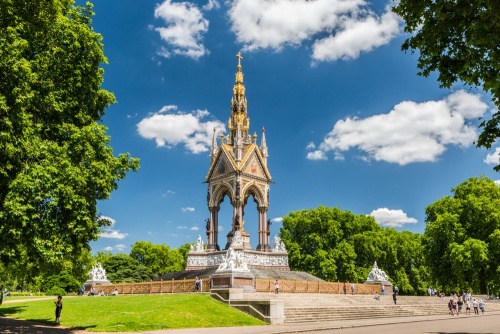 Queen Victoria's memorial to her beloved consort sits at the Coalbrookdale Gates to Kensington Gardens. The statue of Prince Albert, designed by Sir George Gilbert Scott, looks upon the South Kensington cultural centre, the lasting legacy of Albert's grand project, the Great Exhibition of 1851.

The memorial was built from 1864-1876, after a national competition to select a design to remember Prince Albert, who died in 1861. Queen Victoria chose the winning entry from the competition, rejecting, among other proposals, an idea to alter Cleopatra's Needle, and Scott set about building this extravagantly Gothic structure, a feat which would help earn him a knighthood in 1872. 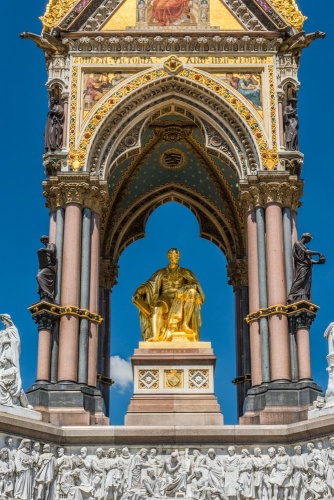 The Albert Memorial cost a total of £120,000; the money raised by a combination of public subscription and Parliamentary grants.

The centrepiece is the 14-foot high statue of Albert, seen seated, holding a catalogue for the Great Exhibition in his hands. Four sculptors worked on the statue, the last being John Foley.

The Memorial is rife with allegory. There are 169 pieces of statuary figures incorporated into the design; the four outer corners depict Africa, Asia, America, and Europe, while above Albert's head are Agriculture, Manufacture, Engineering, and Commerce. The pinnacle, which extends to 175 feet above the base, is bestrewn with more allegorical figures, including Faith, Hope, Charity, and Humility nearest the top.

A fascinating glimpse into Victorian thinking is provided by the portraits of great creators which adorn the monument. Among the depictions are those of Giotto, Cimabue, Orcagna, Pugin, and Cockerell. Scott was not above slipping a portrait of himself among the other greats! 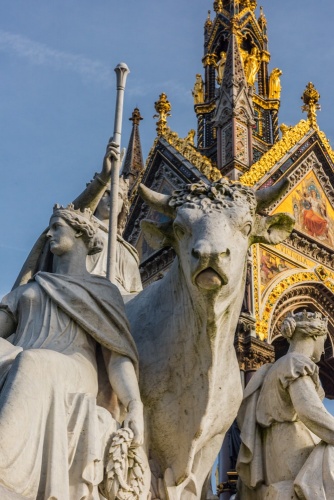 Allegorical statues on the Kensington side of the Memorial

As remarkable as the statuary itself is the variety of materials used in its creation. The pillars supporting the canopy are carved from single stones of granite and weigh 17 tons apiece. It took 20 weeks for eight men to shape and polish the pillars.

A mix of red and grey granite was used for the pillars, and the pedestal upon which Albert sits is made of pink granite mixed with marble. The arches are made of Portland stone and the capitals of Darley Dale stone. 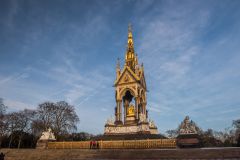 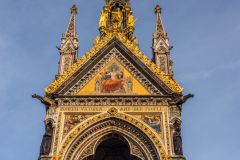 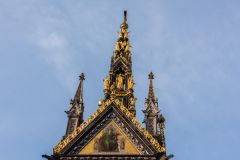 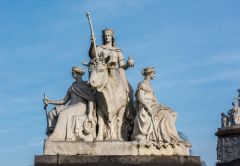 More self catering near Albert Memorial