HERITAGE HIGHLIGHTS:   The only public memorial to the SOE 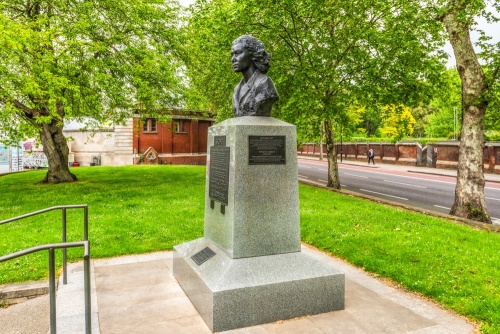 The Special Operations Executive (SOE) was one of seven secret services run by the British military during World War Two. The SOE sent secret agents into occupied Europe to operate behind German lines. Agents worked with resistance fighters in occupied countries and often engaged in dangerous sabotage missions.

The SOE recruited men and women of different nationalities who could more easily go unnoticed behind enemy lines. The idea was Winston Churchill's, and the British Prime Minister saw the SOE as a force that would 'set Europe ablaze'. SOE operatives gathered intelligence, executed sabotage missions and carried out military reconnaissance across Europe.

The SOE faced opposition not only from the Germans and their allies but from within the Allied military itself. Established military units resented the SOE and were wary of the fact that they operated outside the usual command structure. They did not answer to any military hierarchy, nor any of the normal military intelligence agencies. 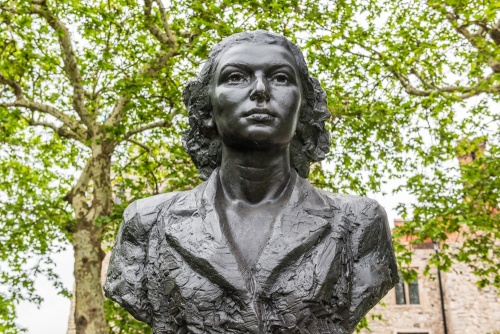 Violette Szabo's bust atop the memorial

They were regarded as brutal, unorthodox and extremely controversial. Their actions in occupied countries often led to dreadful reprisals against the local population, and many in the military considered the civilian death toll too high a price to pay for the SOE's successes. On the other hand, General Dwight D Eisenhower estimated that the work of the SOE shortened the war in Europe by 6 months.

At the end of WWII, the SOE was shut down and its operations merged with other departments. Many of its official papers are still kept out of the public eye on the grounds of political and military sensitivity. An estimated 470 SOE agents were sent behind enemy lines, and 117 of these did not survive - a mortality rate of over one in four.

Perhaps the most famous SOE mission was the raid on Telemark in occupied Norway. Comando operatives destroyed a German factory making heavy water, an essential ingredient in the manufacture of the atom bomb. The leader of the Telemark raid was Joachim Ronneberg, who was present in the official unveiling of the SOE Memorial in London in 2009. 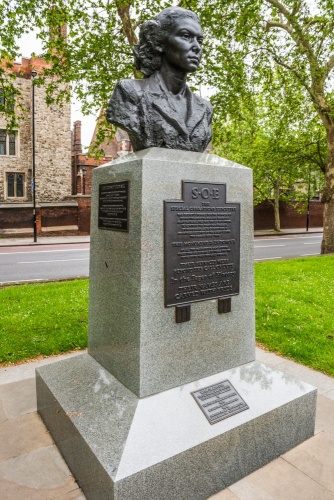 The monument from the north west

WAS SECRETLY FORMED FOR THE PURPOSE OF
RECRUITING AGENTS, MEN AND WOMEN OF
MANY NATIONALITIES WHO WOULD VOLUNTEER
TO CONTINUE THE FIGHT FOR FREEDOM,
BY PERFORMING ACTS OF SABOTAGE IN
COUNTRIES OCCUPIED BY THE ENEMY DURING
THE SECOND WORLD WAR

THIS MONUMENT IS IN HONOUR
OF ALL THE COURAGEOUS S.O.E AGENTS:
THOSE WHO DID SURVIVE AND THOSE WHO DID
NOT SURVIVE THEIR PERILOUS MISSIONS

THEIR SERVICES WERE
BEYOND THE CALL OF DUTY

IN THE PAGES OF HISTORY
THEIR NAMES ARE
CARVED WITH PRIDE 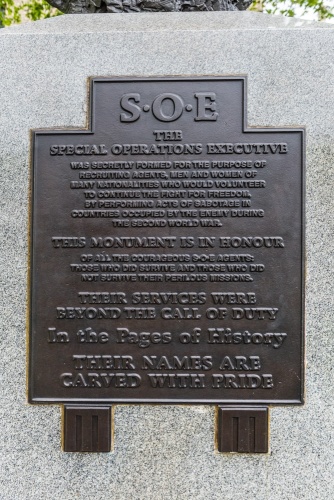 On the north face is a plaque commemorating the heroes of the Telemark rain in these words:

THE HEROES OF TELEMARK
IN 1943 NORWEGIAN RESISTANCE COMMANDOS
SPONSORED BY THE S.O.E.
RAIDED THE ENEMY OCCUPIED NORSK HYDRO PLANE
IN THE TELEMARK REGION OF NORWAY.
THIS SUCCESSFUL RAID SABOTAGED THE
MACHINERY THAT WAS PRODUCING HEAVY WATER
WHICH IS USED IN THE MANUFACTURE OF
THE ATOMIC BOMB 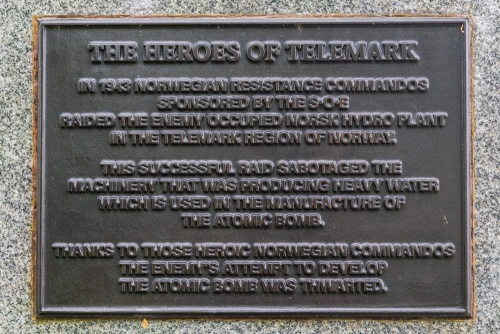 The Heroes of Telemark plaque

On the south face is a dedication to the fighters of the Maquis and to Violette Szabo in these words:

470 S.O.E. AGENTS WERE SENT ON SABOTAGE MISSIONS TO
OCCUPIED FRANCE WHERE THEY FOUGHT WITH
NETWORKS OF FRENCH RESISTANCE FIGHTERS WHO
PLAYED AN IMPORTANT PART IN
THE LIBERATION OF FRANCE IN 1944

WHOSE SCULPTURE IS ON THIS PLINTH AND WHO WAS
POSTHUMOUSLY AWARDED THE GEORGE CROSS AND
THE CROIX DE GUERRE, WAS AMONG THE 117 S.O.E. AGENTS WHO
DID NOT SURVIVE THEIR MISSIONS TO FRANCE 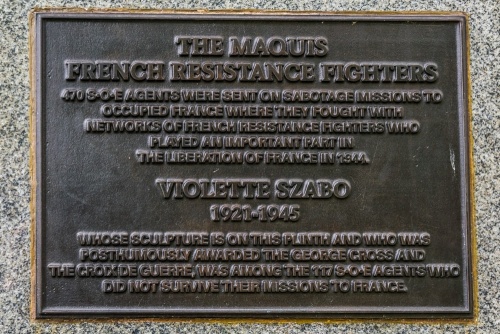 The Maquis and Violette Szabo plaque

The final plaque is on the memorial's granite base. It commemorates those who donated to the monument and reads:

With gratitude
to all those who donated
This monument was commissioned
by
The Public Memorials Appeal
Patron
His Grace the Duke of Wellington KG
Trustees
Ivan Saxton (Founder) Lady Barbirolli OBE
Michael Kennedy CBE Ian Davidson (Hon. Sec.) 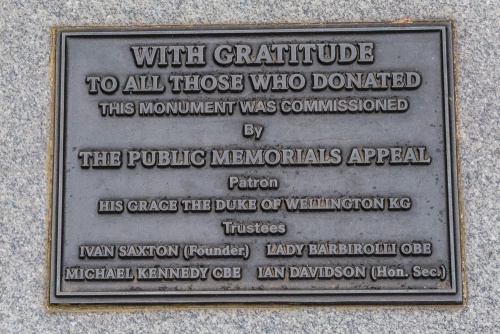 This unlikely heroine was born in Brixton, London to an English father and a French mother. When Violette's husband was killed in action in North Africa she volunteered to go under-cover in occupied France. Her first mission was successful and she was able to organise Resistance fighters and send back useful military intelligence.

She returned safely to Britain, but shortly after D-Day she undertook a second mission. She was captured by the Germans and sent to a prison camp where she was tortured for information. She gave nothing away and was eventually killed. The bust of Violette Szabo was sculpted by London artist Karen Newman. 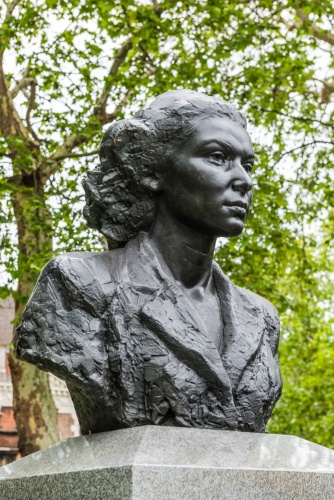 Another view of the Violette Szabo bust

Note:
There is also a small plaque commemorating members of the SOE in the west cloister at Westminster Abbey. It was unveiled on 13 February 1996 by Queen Elizabeth the Queen Mother.

The memorial stands on a thin sliver of grass on the Albert Embankment, opposite Lambeth Palace and immediately south of St Thomas' Hospital. The closest underground station is Westminster, on the opposite bank of the River Thames. From the station entrance turn left and cross Westminster Bridge.

Turn right and go down the steps onto the footpath that runs along the Albert Embankment. Follow the footpath past the hospital until you reach the memorial on your left, up a short flight of steps. From the underground station to the memorial it will take 10-15 minutes easy walking.

More self catering near SOE Memorial