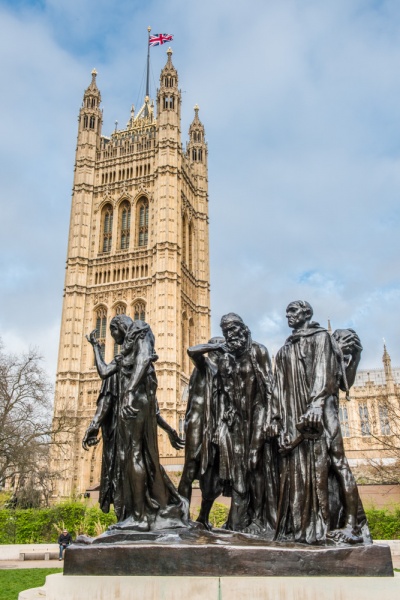 The Burghers of Calais in Victoria Tower Gardens

There are eight royal parks in the Greater London region. The smallest is Victoria Tower Gardens, a narrow strip of parkland beside the River Thames, directly south of the Houses of Parliament. The park takes its name from Victoria Tower, which looms over the green space. The Tower acts as a storehouse of important Parliamentary documents. On the southern edge of the park is Lambeth Bridge, leading over the Thames to Lambeth Palace.

The gardens began during Joseph Bazalgette's creation of the Embankment in the 1870s, which provided London with a modern sewage system and at the same time narrowed the River Thames. The park was extended in 1898 when several nearby wharves were subject to a compulsory purchase order. The park was officially opened in 1914 and is open to visitors from dawn until dusk daily. At the southern end of the park is a play area and public washrooms (not free).

The park is home to several memorial celebrating the theme of freedom. 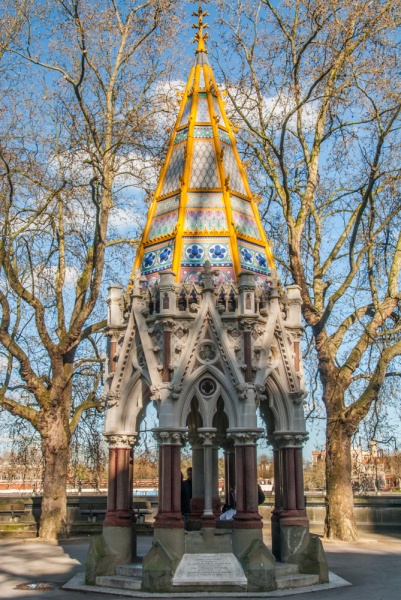 In the centre of the park is a striking Victorian monument that looks vaguely like an Oriental pagoda. It commemorates MP Thomas Buxton, whose campaign for the abolition of slavery helped make slavery illegal in the British Empire. Buxton also helped found the British and Foreign Anti-Slavery Society, with the aim of abolishing slavery throughout the world.

The memorial was designed by SS Teulon and erected in Parliament Square in 1865 by Buxton's son Charles. It was moved to Victoria Tower Gardens in 1957 to mark the 150th anniversary of the 1807 act of Parliament abolishing the trans-Atlantic slave trade. It is a fascinating example of Victorian style, with a timber-framed spire clad in enamelled sheet steel, and a base structure of marble, wrought iron, metal, granite, sandstone, mosaic, terracotta, and limestone. 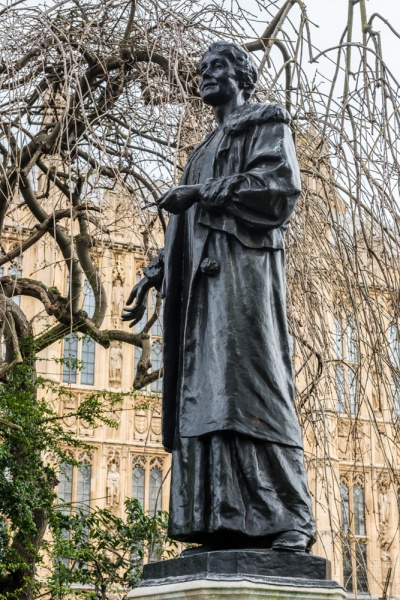 Near the northern entrance to the park is a memorial to Emmeline Pankhurst, leader of the suffragette movement, who campaigned for decades to gain the right for women to vote. The memorial features a statue of Pankhurst by sculptor A G Walker. It was officially unveiled by Prime Minister Stanley Baldwin in 1930.

The ceremony must have caused Baldwin some embarrassment, for he had opposed the vote for women. The Metropolitan Police, whose members had arrested suffragettes regularly, asked to be allowed to play during the ceremony.

The statue shows Pankhurst in the act of delivering a speech. It is an appropriate pose, for she was known for her speaking style, a style she developed by attending theatrical performances so she could learn to copy the delivery of stage actors. Her statue stands on a stone plinth. Inside the plinth is a metal box holding her personal letters and the obituary written by The Times newspaper on her death. Pankhurst is buried in Brompton Cemetery, another royal park not far away.

She is still a figure of inspiration to women's rights activists. When we visited the park there was a wreath at the foot of her statue laid by campaigners for equal work pensions for women. 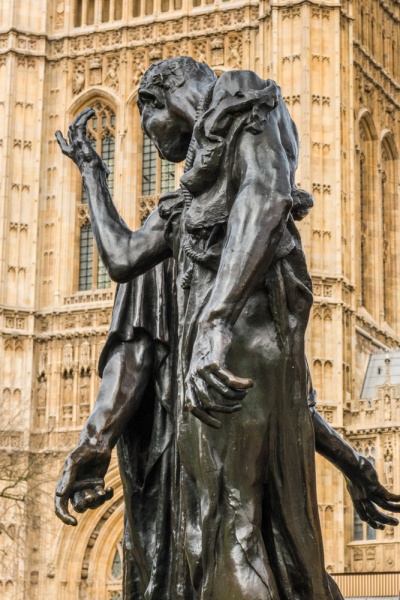 French sculptor Auguste Rodin's sculpture is one of the most famous pieces of sculpture of the last several centuries. It depicts a scene from the siege of Calais in 1347, during the Hundred Years War between England and France. Edward III besieged Calais for a year, and the plight of its citizens was desperate.

Six leading burghers, or civic leaders, offered their own lives if Edward would spare the people remaining alive within the town walls. Queen Philippa, Edward's wife, asked he husband if the Burghers could be s[pared if the city surrendered, Edward agreed, and the people of Calais were allowed to leave the besieged town.

Rodin executed the sculpture in 1889 for the town hall in Calais. He later made four casts of the original sculpture. One cast was purchased by the National Art Collection Fund in 1911 and erected here. Rodin journeyed to London to offer his advice on where to erect the statue.

The Victoria Tower Gardens is a lovely public park, but it is the monuments and the theme they are erected to express that make it so enjoyable to visit. There is a walkway on the east side, beside the river, lined by London Plane trees, with excellent views to Lambeth Palace and north to the BA London Eye. There is a very small wedge-shaped extension to the garden on the south side of Lambeth Bridge. 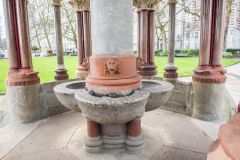 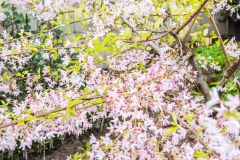 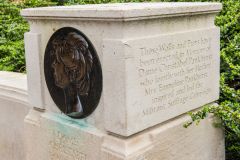