Boadicea and Her Daughters Statue, Westminster 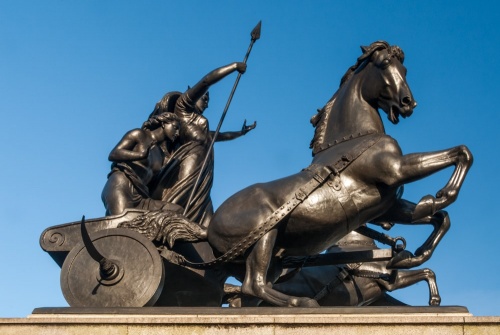 Boadicea and Her Daughters

At the western end of Westminster Bridge, a stone's throw from Big Ben and the Palace of Westminster, stands one of London's icons, a statue of Queen Boadicea on her war chariot, her daughters crouched beside her, one hand gripping a spear, the other outstretched in a regal gesture while her horses rear their forelegs in the air. There are no reins controlling the horses. Thousands of tourists pass the statue each day - and most ignore it completely.

Boudicca (known to the Romans as Boadicea) was the queen of the Iceni tribe, a native British tribe occupying what is now East Anglia. Very little is known about her life, and even those 'facts' are open to debate. Much of what we think we know comes from accounts written by Roman historians, who had an axe to grind.

When the Romans conquered Britain in AD 43 the Iceni, under their king Prasagustus, were given client kingdom status. That meant that the Iceni were subservient to Rome but not directly part of the Roman empire. As part of the agreement, Prasagustus named the Emperor of Rome joint heir to his kingdom along with his wife and daughters.

Unfortunately, Roman law did not allow inheritance through the female line, so when Prasagustus died in AD 60 Rome claimed the Iceni kingdom. They seized tribal property and the Iceni were treated like slaves. According to an account by the Roman historian Tacitus, when Boudicca had the temerity to complain of this treatment she was flogged and her daughters were raped. 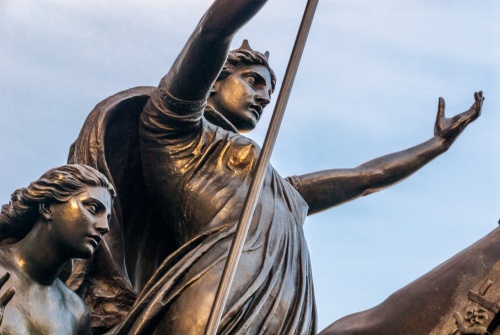 A closer look at Boudicca/Boadicea

Boudicca raised her people in revolt against the might of Rome. With the aid of the neighbouring tribe of the Trinovantes she sacked Camulodunum (the Roman settlement that became Colchester), destroyed St Albans and burned London to the ground.

Roman historians claim that up to 80,000 people died in these raids. The Iceni offered no quarter and treated their enemies brutally. The Roman Governor Suetonius Paullinus realised that he was outnumbered and retreated from London to gather his forces. As a result, there were no Roman troops left to withstand Boudicca and her supporters, estimated to number some 200,000 men.

Suetonius Paullinus gathered 10,000 men and took up a position in a narrow gorge somewhere in the English Midlands, possibly near High Cross in Leicestershire. The location was a masterful choice, for the narrow defile prevented Boudicca from bringing her vastly superior forces into play.

The result was a rout; the Romans lost an estimated 800 men while Boudicca's Celtic army lost 80,000. We can take those numbers with a grain of salt, but the end result was that the Iceni and their warrior queen were defeated, and Britain was secured for the Romans.

What became of Boudicca?

Accounts differ. One version says that when she realised the battle was lost she poisoned herself and her daughters rather than let them be captured by the Romans. Another account says that she was mortally wounded in the fighting and was given a lavish burial after the conflict was over. The location of her grave is not recorded, though one improbable legend suggests that she lies between platforms 9 and 10 at Kings Cros Station and her ghost haunts the underground passages beneath the station.

Accounts of her life and battles were published sporadically during the medieval and Tudor period, but it was not until the Victorian period that Boadicea, as she was then known, became a national symbol. And one man was responsible; Alfred, Lord Tennyson, Queen Victoria's Poet Laureate. Tennyson's poem 'Boädicéa', written in 1859 and first published in 1864, brought the Iceni queen alive to a new audience.

'Up my Britons, on my chariot, on my chargers, trample them under us' 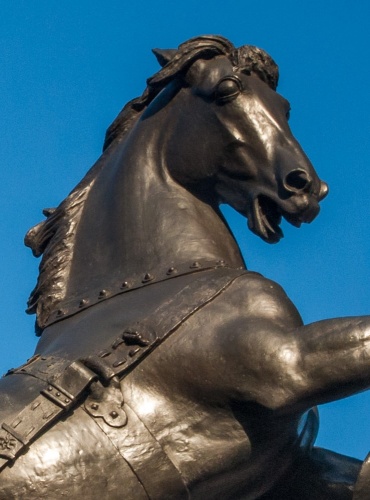 The sculpture was designed by one of Victorian England's greatest sculptors, Thomas Thornycroft, the father of William Hamo Thornycroft, who grew to become even more famous than his father. The elder Thornycroft started on the Boadicea sculpture in 1856 and took his time creating what he wanted, assisted at times by his son William. He exhibited the head of Boadicea in the mid-1860s, but the sculpture was not completed until just before Thornycroft's death in 1885. And then it was discovered that there was no money available to cast Thornycroft's model.

In 1894 London County Council decided to excavate an earthwork on Parliament Hill known as 'Boadicea's Grave'. Tradition suggested that this earthwork was, in fact, a tumulus, or burial mound, and that it marked Boudicca's final resting place. Unfortunately, the excavations proved to the satisfaction of the Society of Antiquaries that the earthwork contained no burials and had nothing to do with Boudicca.

Nevertheless, Thornycroft's son, John Isaac Thornycroft suggested that it would make a suitable location to erect his father's sculpture. But yet again, no public money was available to cast the sculpture in bronze, so nothing was done.

A committee was created to launch a public appeal for £6,000 to cast the model. The necessary amount was raised by 1898 and the statue was cast at the JW Singer & Sons Foundry in Frome, Somerset, the same foundry responsible for the lions in Trafalgar Square. And it cost just £2,000 rather than the anticipated £6,000. And yet one final obstacle remained; there was no location available to erect the sculpture. It was not until 1902, 17 years after Thomas Thornycroft's death, that a location at Westminster Pier was found and the statue was erected on a granite plinth created by Thomas Graham Jackson. 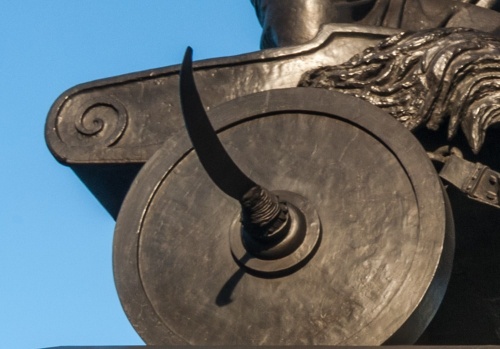 A vicious scythe blade on a chariot wheel

Prince Albert and Queen Victoria were closely involved in the sculpture and the likeness of Boadicea is supposed to bear a passing resemblance to the young queen. Prince Albert wanted the sculpture to adorn the central arch of Decimus Burton's grand entrance to Hyde Park and he asked Thornycroft to create 'a throne upon wheels'.

Her chariot is also historically inaccurate; it is based on Roman chariots rather than the native British ones. It is highly decorated, with a sunburst on the base of the shaft and small sunbursts decorating each horse's chest. Elongated knives protrude from the chariot's wheels. These curved blades would have been used to cut down enemy soldiers in an all-out charge. The horses are angled outwardly, and are not symmetrical.

The plinth on which the statue stands was originally plain, but in 1903 inscriptions were added on three sides. On the front of the plinth is the inscription 'Boadicea, Boudicca, Queen of the Iceni who died AD 61 after leading her people against the Roman invader'.

On the right, facing the River Thames, are the words 'Regions Caesar never knew, thy posterity shall sway'. This is a quote from Cowper's poem 'Boadicea, an ode', written in 1782.

On the side facing the road is the inscription 'This statue by Thomas Thornycroft was presented to London by his son Sir John Isaac Thornycroft CE and placed here by the London County Council, AD 1902'.

It does seem rather jarring to see this wonderfully evocative statue, symbolic of British independence, hemmed in by a fast-food kiosk and a souvenir stand, and largely ignored by the throngs of tourists that pass by almost beneath her chariot's wheels.

It is incredibly easy to find the statue. Westminster underground station is a few steps away. From the station take the embankment exit. The steps up to the Embankment bring out directly beside the monument.

Nearest Accommodation to Boadicea and Her Daughters Statue, Westminster:

More self catering near Boadicea and Her Daughters Statue, Westminster

More Hotels near Boadicea and Her Daughters Statue, Westminster

More bed and breakfasts near Boadicea and Her Daughters Statue, Westminster