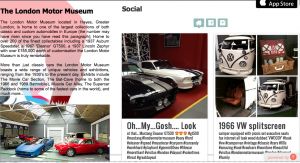 Classic car buffs will enjoy their visit to the London Motor Museum, with its showroom of notable makes from the 50s to the present day. Book in advance for a ride in a pink Cadillac or a Pontiac 79 Trans Am muscle car.

The museum was founded by Elo, a former model and fashion designer. The museum started in 2001 with just seven cars and now holds over 200 of the most collectable vehicles in Britain.

What makes the museum unique in London is that it hosts so many custom-built and customised cars, many of them American-built.

Highlights of famous vehicles include a 1966 Batmobile used in the TV series and a 1989 version from the first Batman film. See Herbie the Volkswagon Beetle from the Love Bug films, and a Ford Gran Torino used in the popular TV series Starsky and Hutch.

See Mr Bean's Mini, a DMC Delorean, like the model used in the Back to the Future films, and a Lotus Esprit used in the 1977 James Bond film, 'The Spy Who Loved Me'.

But the museum has much more than 'film star' cards; see custom luxury vehicles like a Lincoln Continental Lowrider, and a Louis Vuitton Cadillac Deville. Famous makes include Ferrari, Jaguar, and Aston Martin. Sit inside a custom-built 20 foot long Rolls Royce.

Muscle Car Alley showcases some of the most powerful and outrageous cars ever made, including Ford Mustangs and Dodge Chargers.

The Supercar Paddock holds some of the fastest vehicles from around the world. The Paddock featured at Top Gear Live 2012 and showcases a Gumpert Apollo, SSC Ultimate Aero TT, and perhaps the most popular supercar, the Lamborghini Countach QV5000.

Collectables include a 1937 Auburn Speedster, and a 1937 Lincoln Zephyr which has received over £155,000 worth of customising.

The Supercar Workshop lets visitors look behind the scenes at a vehicle workshop and see how cars are customised.

The earliest vehicles in the collection date to the 1930s, though the main focus is on cars from the 50s-70s.

Sadly, the London Motor Museum has closed its doors after decades of welcoming thousands of visitors. This page will shortly be removed. Please do NOT plan a visit!!

Note: You can get Free Entry to London Motor Museum with the London Pass