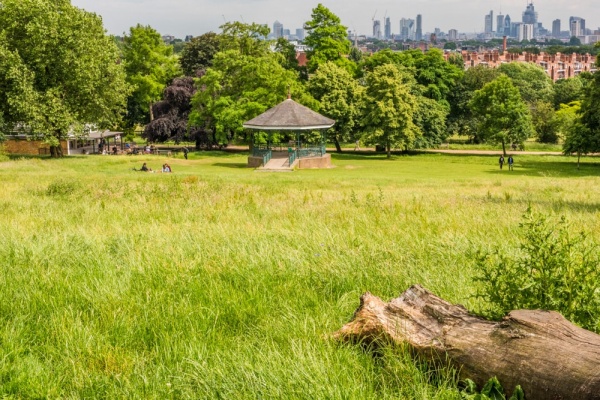 Hampstead Heath is one of the largest and most popular green spaces in the Greater London area. It is only 4 miles from central London but it feels like 4,000 miles from the bustle of the city. The Heath covers roughly 790 acres (about 360 hectares) and runs along a sandy ridge between Highgate to the east and Hampstead to the south-west.

The park includes popular recreational facilities, including three open-air swimming pools. It is extremely popular as a place to fly kites, and you can usually see several kites flying (or crashing to the ground) at Parliament Hill. In fact, so popular is kite-flying here that the hill is sometimes known as Kite Hill.

The hill has yet a third name; Traitors Hill. According to legend, the hilltop was used by Parliamentary troops during the early days of the English Civil War. Since the troops were rebelling against the king, the hill was dubbed Traitor's Hill. When Parliament emerged victorious in the Civil War, the name changed to Parliament Hill.

Another legend clings to the hilltop; it is said, probably with some poetic license, that Robert Catesby, the prime mover of the Gunpowder Plot, planned to watch for the destruction of Parliament from the hilltop, accompanied by his fellow conspirator, Guy Fawkes. 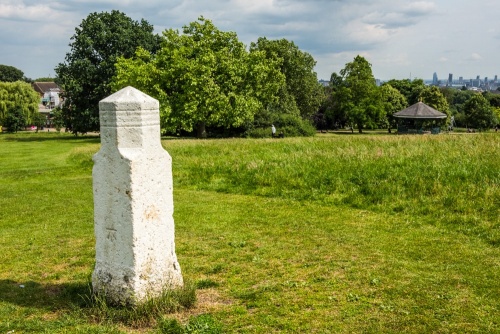 The Stone of Free Speech

The written history of Hampstead dates to AD 986 when King Aethelred (the Unready) gave 5 hides of land to one of his retainers at a place called Hemstede. At the time of the Domesday Book of 1086 the estate was held by the monks of Westminster Abbey.

Part of the estate was given to Richard de Balta in 1133 but later that century the entire Manor of Hampstead was granted to Alexandre de Barentyn, the royal butler. The land stayed in private hands until WWII, though in a legal twist, the estate passed on to the 5th Viscount Gough.

Fine-grained sand underlies the heath to a depth of 10 feet in places. This sand was prized both by builders and by iron founders. The sand has been quarried since at least the medieval period, creating a landscape of large pits, many of which then filled with water to become ponds, and others simply turned into boggy hollows.

Quarrying was so common that it was thought of as a traditional right, until a court judgement in 1806 found that taking turves, while an established custom, was illegal if it tended to destroy the common land. Quarrying left ridges raised like a causeway, and the exposed sand sometimes created patches of yellow and red that some visitors like Charles Dickens thought of as picturesque.

The heath was used by commoners to graze their animals and to gather firewood. In Tudor times springs on Hampstead Heath were used to supply London with drinking water. In 1545 large areas of the Heath were declared off-limits for hawking and hunting, to keep the king's game supply intact.

In 1692 Hampstead Water Company dammed a tributary of the River Fleet to create a string of reservoirs on the heath. 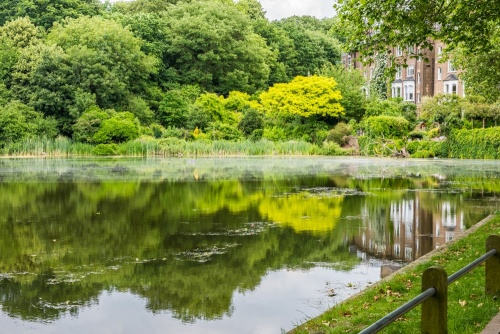 The heath was used for military training exercises in the Tudor period, and a beacon was erected as part of an early warning system against attack.

By the late 17th century Hampstead Heath had gained an unsavoury reputation as the haunt of highwaymen, a reputation that lasted until well into the 19th century. One of those highwaymen was Francis Jackson, who was publicly hanged here in 1674. Jackson's body was displayed on a gibbet for many years, and even in the 19th-century maps of the heath showed gibbet elm trees on the slope leading down to North End.

Hampstead village became the haunt of artists and poets such as Leigh Hunt, who wrote sonnets praising its beauty. Poets were followed by painters, the most famous being John Constable, who settled in Hampstead and painted the Heath numerous times. William Wordsworth extolled the Heath's beauty, and throughout the Victorian period it was a destination for day-trippers escaping the grime of central London for the open sky of Hampstead. In 1860 Hampstead Heath station opened, ensuring a steady stream of Londoners eager to experience the beauty of the Heath for themselves.

Over the centuries parcels of the medieval estate were sold off to developers, but the heath that makes up the core of the park remained common land until it was purchased by the Metropolitan Board of Works. That initial purchase was followed in 1888 by Parliament Hill, while Golders Hill was made part of the park in 1898 and Kenwood House and its grounds in 1928. The park is now managed by the City of London Corporation as a public park. 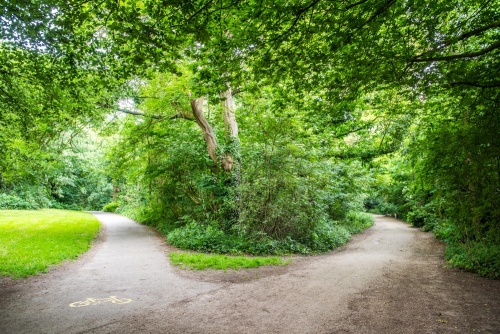 If you leave the kites behind atop Parliament Hill and head north towards Kenwood House you come to a large earthen mound surmounted by pine trees. No one is quite sure what the mound is, but there are plenty of theories. The most intriguing suggests that the mound is the burial site of Queen Boudicca of the Iceni tribe, who led a bloody revolt against Roman rule in AD 70. A more plausible explanation is that it is a Bronze Age burial mound, dated to sometime between 2000-750 BC.

One Victorian historian rather fancifully declared it to mark the site of a battle between ancient tribes from London and St Albans, while a more recent theory suggests that it is the base of a 17th-century windmill. Or could it be all that remains of a folly built for the lord of Kenwood House? No one knows, and that's part of the appeal of The Tumulus. 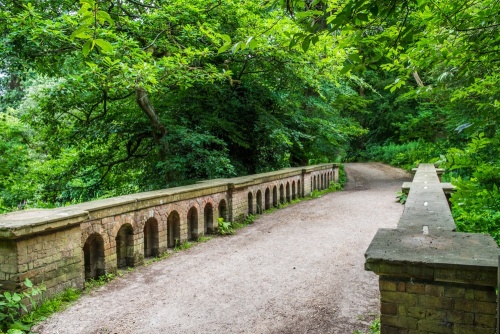 If you head south from the summit of Kite Hill you will see a small white monument in the field between two converging paths. This is the Stone of Free Speech, said to mark a public meeting place for religious and political groups in the 18th and 19th centuries.

The stone apparently had an inscription to this effect at one point, but if so, the inscription has disappeared. Though the origins of the stone are in doubt, its reputation means that whenever freedom of expression is challenged the stone is used as a gathering point for protests.

This curious landmark appears to have no purpose, but its presence in the middle of the park is the result of a fascinating legal battle. In the 19th century, a local landowner and developer named Thomas Maryon Wilson wanted to turn Hampstead Heath into a private estate. He built the viaduct as part of a planned entrance into his estate.

Local residents were aghast at Wilson's plans, and launched one of the first land preservation campaigns in Britain. They launched legal proceedings that effectively stopped Wilson's plans, so now the viaduct stands on its own, linking nothing to nothing. 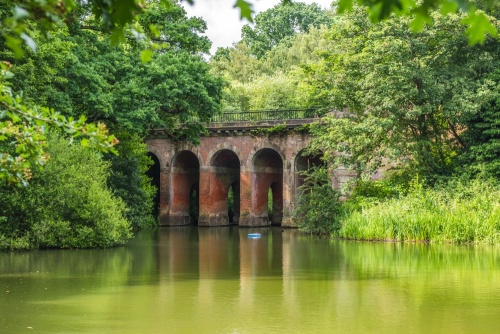 Uphill from the Viaduct Bridge is a smaller and much more unobtrusive bridge, also built by Thomas Maryon Wilson as part of his plans for East Park Estate.

Within the grounds of Kenwood House stands a quiet open space surrounded by woodland. This peaceful wooded place was not always so peaceful; in the 18th and 19th centuries, it was one of London's most popular places for settling disputes by duelling. The ground is exactly 40 paces long, the prescribed distance for duels between gentlemen according to a set of rules established in 1777.

Saving the best for last, Hampstead Heath is home to one of London's finest historic houses, Kenwood House. The first house here was built around 1694 but the elegant Palladian house we see today was designed in 1764 by Robert Adam for William Murray, later to become the 1st Earl of Mansfield.

Here at Kenwood Adam created one of the finest neo-classical houses in England. The interior acts as a home to a superb art collection gathered by the 1st Earl of Iveagh, who left the house to London City Council when he died in 1927. The most popular painting in the collection is a self-portrait by Rembrandt.

Kenwood House is in the northern section of Hampstead Heath, accessible by footpath from the south or if you are arriving by car there is a very small English Heritage paid parking area at West Lodge off Hampstead Lane. 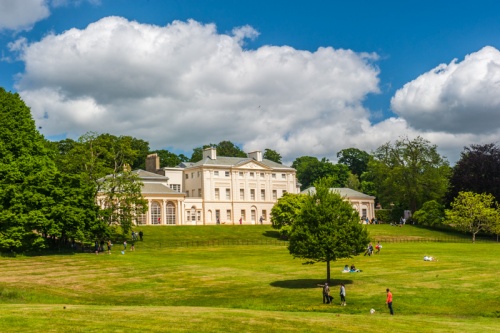 The most convenient tube station is for access to the park is perhaps Hampstead, on the Edgware branch of the Northern Line between Belsize Park and Golders Green. Hampstead station is in Travelcard Zone 2 (technically the station is on the boundary between Zones 2 and 3).

There are three parking areas. Parliament Hill Lido car park, East Heath car park, and Jack Straws car park. In addition, Golders Hill Park car park has eight disabled spaces only. Be aware that the car parks are all pay and display and the charges are high even by London standards.

More self catering near Hampstead Heath