HERITAGE HIGHLIGHTS:   Linked to both Elizabeth I and Henry VIII 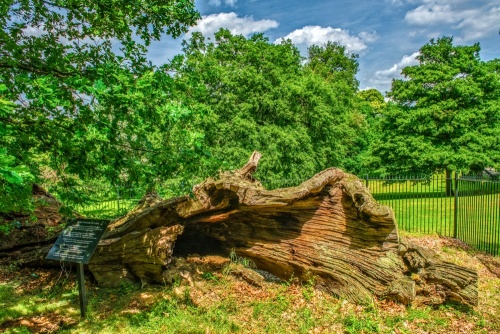 At the southern end of Lover's Walk in Greenwich Park, a stone's throw from Maze Hill Gate and a short stroll east of the Royal Observatory, is a fallen oak tree, its ancient centre hollowed with the passage of time. This is Queen Elizabeth's Oak, linked by long-standing tradition to Elizabeth I and her father Henry VIII both of whom were born at nearby Greenwich Palace.

Elizabeth I was born at Greenwich Palace in 1533. Greenwich was popular with all the Tudor monarchs, not least because its location on the River Thames made travel into London easy.

It is said that as a child Princess Elizabeth 'oft partook of refreshments' under the tree and that her parents Henry VIII and Anne Boleyn danced around the tree during their courtship. As the trunk became hollow over the centuries the tree took on a new role as a holding cell for offenders caught breaking the park rules.

The hollow area was so large that the interior was laid with paving stones, and a door was inserted on the side facing One Tree Hill, along with a window for light. In the Victorian period a large bench was placed outside the trunk.

The tree is said to have died in the middle of the 19th century but was held upright by the heavy growth of ivy that encircled it. Gravity had the final say, however, and the tree fell at last to earth in June 1991 after rain washed away the heavy growth of ivy. In 1990 it was measured with a girth of 7.9m (26 feet), including 0.6m (2 feet) of ivy. 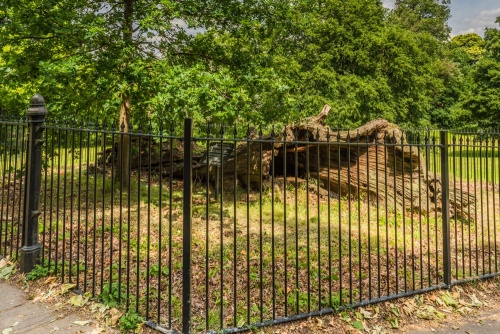 The surviving trunk is roughly 8.6m long and the trunk end points to the south-east. Most of the bottom half of the trunk has rotted away.

The tree is kept safe behind an iron railing. Inside the railing is a plaque reading:

Queen Elizabeth's Oak
This ancient tree known as Queen Elizabeth’s Oak is thought to have been planted in the 12th Century and it has been hollow for many hundreds of years.

It has traditions linking it with Queen Elizabeth I, King Henry VIII and his Queen Anne Boleyn, it may also have been a lock-up for offenders against park rules.

It died in the late 19th Century and a strong growth of ivy supported it until it collapsed in June 1991.

The English Oak alongside was planted by His Royal Highness the Prince Philip, Duke of Edinburgh KG, KT Baron Greenwich on 3rd December 1992

The tree was donated by Greenwich Historical Society to mark 40 years of the reign of Queen Elizabeth II.

Beside Queen Elizabeth's Oak is another oak tree, planted by HRH Prince Philip, the Duke of Edinburgh on 3 December 1992 to mark 40 years of Elizabeth II's reign.

Are the stories true?

The best we can say for certain is that the future Queen Elizabeth could certainly have rested in the shade of the tree, and her mother and father might well have danced or otherwise enjoyed themselves under its branches. The proximity of the tree to the site of Greenwich Palace makes it likely that Henry VIII, Anne Boleyn, and Princess Elizabeth all knew the tree.

How Old is It?

In 2014 experts from English Heritage performed a tree-ring analysis on Queen Elizabeth's Oak. They collected core samples from the trunk and sections of broken pieces found underneath the fallen trunk. For comparison purposes they also analysed a nearby oak tree.

Results allowed them to date the tree to the late 13th century. The fact that the tree was hollow meant that they could not establish a precise date, but even allowing for some leeway in dating accuracy it seems certain that the tree was alive in Queen Elizabeth's lifetime. Analysis of the sapwood showed that the oak died in the period 1827-1842 when it was roughly 550 years old.

The analysis also showed that the tree trunk would have had a girth of around 4.8m at the time of Elizabeth I's death in 1603. That means it was already a large tree when Henry VIII ascended the throne. These results tend to support the tradition that the tree was large enough to be a noteworthy feature in Greenwich Park during the reigns of Henry VIII and Elizabeth I. These factors certainly suggest that the tradition linking Elizabeth and Henry to the tree might well be based in fact. 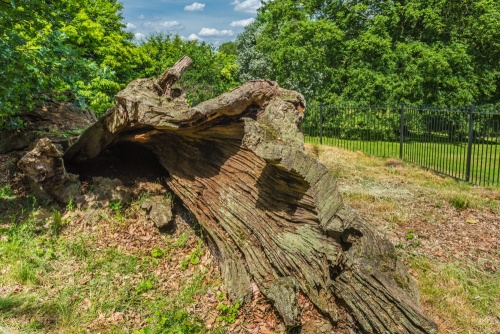 Looking into the hollow trunk

The oak tree in Greenwich Park is not the only 'Queen Elizabeth's Oak' in England. It is sometimes mistaken for the tree of the same name in the grounds of Hatfield House in Hertfordshire. It was while reading a book under that tree in 1558 that Elizabeth heard the news that her sister Mary had died, making Elizabeth the new queen.

There is another, less famous oak named for Queen Elizabeth that stands in the pretty East Sussex village of Northiam. Elizabeth I stopped in Northiam on 11 August 1573 during one of her 'progresses' around her kingdom. She had a picnic on the village green, sheltered by the branches of a large oak tree. When Elizabeth left, she gave her green damask slippers to the villagers. The slippers are held at Brickwall school and put on display for special occasions. The oak still stands, though its gnarled trunk now needs supports.

There is a third Queen Elizabeth's Oak in Cowdray Park, West Sussex. In 2002 this tree was voted one of fifty Great British Trees by the Tree Council.

By far the easiest way to reach Queen Elizabeth's Oak is to take the DLR (Dockland Light Railway) to Cutty Sark station. Walk up Greenwich Church Street to Nelson Road, cross over the road and turn right on King William Walk. You will see the St Mary's Gate entrance Greenwich Park ahead of you. Walk up The Avenue, keeping the Royal observatory on your left. Turn left at the roundabout onto Great Cross Avenue, then left onto Bower Avenue. You will see Queen Elizabeth's Oak behind a railing near the point where Bower Avenue meets Lover's Walk.