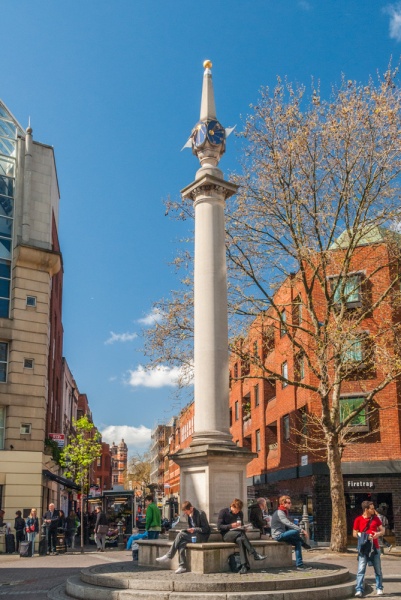 Sitting neatly between the nightlife of Soho and the elegance of Covent Garden is one of London's most interesting neighbourhoods, Seven Dials. The area is centred on a junction of seven roads, Earlham Road, Monmouth Street, and Mercer Street, which each pass directly through the junction, and Shorts Gardens, which runs from the north-east side of the junction.

At the centre of the junction stands an intriguing London landmark, a slender column topped with a multifaceted sundial. This is the Seven Dials Monument, and to understand its history you have to go back to 1690, when the area was open farmland bordering the expanding West End of London. The land was owned by the Worshipful Company of Mercers, who granted building licenses for income.

An MP named Thomas Neale saw the potential for developing the area, turning it into a genteel neighbourhood of well-to-do residents. Neele was inspired by the success of a similar development at the nearby Covent Garden Piazza. He obtained the freehold of the estate, known as 'Cock and Pye Fields' after a pub on the site. In return, he had to raise large sums of money for the Crown and agree to pay a hefty rental fee for properties on the site. If he was to recoup his large investment he would have to make the venture show a sizeable, ongoing profit. 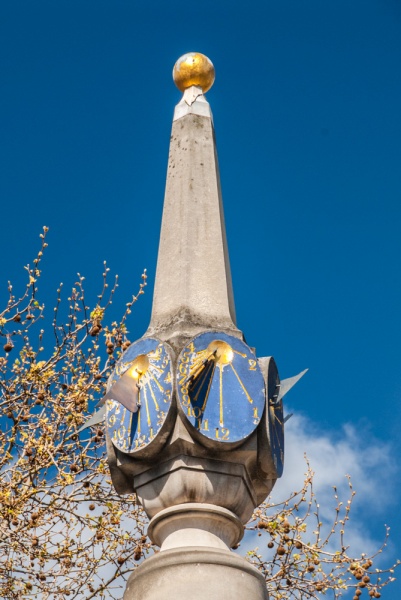 The sundials and top of the Monument

He designed a street layout based on six roads converging on a roughly circular central point. A seventh road was later added to the design, rather spoiling the evenly balanced layout. Neale's idea was simple; by creating a star-shaped design he could maximise the number of properties he could fit into the available space.

Neale wanted a focal point at the centre of the road junction, so he commissioned a sundial column. The column rests on a square base, itself set upon a stepped dais. The column rises to a multi-facetted sundial topped by a slender spire. At the very top of the spire is a gilded ball.

How many dials are there?

The sundial has six faces, each with a gnomon and markings for the hours. The column itself acts as the seventh gnomon. The monument was designed by sculptor Edward Pierce and named the Sundial Pillar for obvious reasons. Pierce was considered the foremost carver of his day, used to working with wood, stone, and marble. Pierce worked on many of Sir Christopher Wren's London churches, sculpting statues and busts.

Another version of the 'why are there only six sundial faces?' question is that two of the roads entering the junction did so at such similar angles that a seventh sundial face was thought unnecessary.

The monument was deemed a success from its inception, and was lauded as one of London's 'great public ornaments'. Around the outside of the junction are plaques telling the modern visitors how to use the Monument to calculate the correct time by converting apparent solar time to Greenwich Mean Time.

Neale's ambitious development seemed a success at first; the first wave of tenants were respectable lawyers, merchants, and gentlemen. Neale sold his interest in the development in 1695. A subsequent owner named James Joyce broke the freehold and sold off triangular plots of land individually.

That's when Seven Dials began a headlong slide into decline. Buildings were subdivided and sublet, and the once-genteel neighbourhood became one of London's worst slums, a byword for poverty and despair, the haunt of thieves, cut-throats, and prostitutes. At one point in the 18th century, 39 watchmen had to be employed to keep order in Seven Dials, and mob violence was a common occurrence. 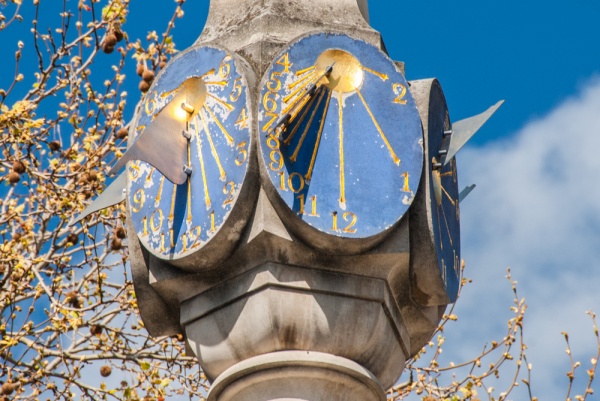 Charles Dickens portrayed Seven Dials in his series of articles known as Sketches by Boz, and Agatha Christie used it as a setting for her Seven Dials Mystery. The area was also mentioned in the Gilbert and Sullivan operetta Iolanthe, which mentions 'the lowly air of Seven Dials'.

The original Seven Dials Monument was taken down in 1773. Traditional London history suggests that it was pulled down by an unruly mob, and another story says it was toppled because it was believed there was treasure buried beneath it. In truth, it was removed by the Paving Commissioners because they thought it acted as a gathering place for 'undesirables'.

Thankfully, the monument was not destroyed. It was purchased by a Palladian architect named James Paine (1717–1789) who later became High Sheriff of Surrey. Paine kept the monument safe at his residence in Addlestone, Surrey.

In 1820 a public subscription campaign launched by the landlord of the Ship Inn in Weybridge, Surrey, raised the money to buy the monument. It was re-erected on Monument Green in Weybridge, near the Library, as a memorial to Princess Frederica Charlotte of Prussia, Duchess of York and Albany, who lived in in the town for the last 30 years of her life. 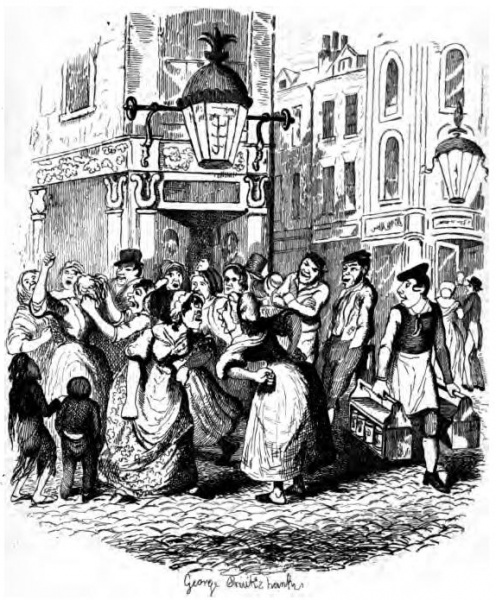 Seven Dials from 'Sketches by Boz' by Charles Dickens

In 1989 a new sundial column was erected, copying the original design. It was publicly unveiled by Queen Beatrix of the Netherlands, who was making a state visit to mark the tercentenary of the reign of William and Mary. The connection is appropriate, as it was during William and Mary's joint reign that Seven Dials was developed.

Neale's layout for Seven Dials meant that the apexes of the junction were very narrow, triangular-shaped plots of land. At one point each of the seven apexes hosted a pub. It is said that the cellars of each pub connected underground, providing a handy escape route should one be required.

Neale's name lives on in two streets in the Seven Dials area; Neal Street and Neal's Yard. The Yard has attracted an 'alternative' culture since the 17th century when astrologers and occultists were drawn to the area by the sundial and the symbolic star-shaped layout of the streets.

Thankfully Seven Dials has been rejuvenated from its days as a disreputable slum. It is now one of London's most enjoyable neighbourhoods, with the feel of a village in the midst of the great urban sprawl of London. And the Seven Dials Monument still acts as a focal point for visitors and residents alike. It is easy to reach from Leicester Square and Covent Garden tube stations, or, if you enjoy a little longer walk, from Trafalgar Square.