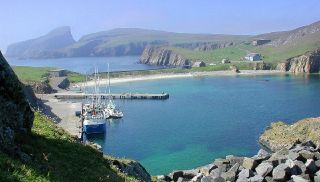 This remote island lies in the stretch of water between Orkney and Shetland. It is just 3 miles long and 1.5 miles wide. It is one of the best places in Britain to see unusual and rare birds and has its own very popular traditional knitwear.

Fair Isle is famous worldwide for its traditional knitwear, and knitting forms an important part of the island's economy. In a quite traditional division of labour, most women knit, and most men are engaged in crofting.

What makes Fair Isle knitwear so prized is its distinctive design of horizontal bands of geometric patterns, usually knitted in undyed, natural colours of grey, fawn, and white. The weaving of Fair Isle jumpers (sweaters) was a very labour-intensive process, and all the female members of an extended family, including children, often worked together.

The design has proved so popular that imitation garments are now made around the world, but for centuries the original Fair Isle knitwear was used as a form of currency. When ships came to call on the island, residents would barter knitted garments for essential supplies that were not locally available.

Today many of the islanders still produce Fair Isle knitted goods, using hand-frames and then finishing each garment by hand, including washing and dressing the fabric. Every garment made on the island bears an official star motif to show that it is authentic. 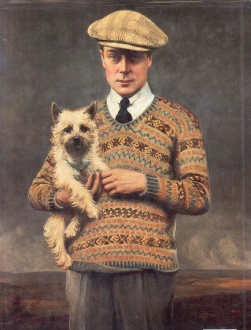 Edward, Prince of Wales in
a Fair Isle jumper, 1925

In 1948 George Waterston established a permanent bird observatory on Fair Isle. The Observatory proved a perfect point to watch for the unusual and rare birds that frequent the island.

Species like a Caspian plover - only the 4th ever seen in Britain - have been seen here. Fair Isle has the distinction of being the best place in Britain to see rare birds. Records show that 27 'first sightings' of birds have been made here since the observatory opened.

Far more than simply an observation point, the Observatory offers catered accommodation to bird-watchers and houses the island's only bar and restaurant.

In 1974 George Waterston, founder of the Observatory, sold the entire island to the National Trust for Scotland. There are now roughly 70 full-time inhabitants.

Not surprising, given its location in the channel between Shetland and Orkney, Fair Isle has been the site of many wrecks over the years. The most famous was the Spanish vessel El Gran Grifon.

The ship was fleeing north after the defeat of the Spanish Armada in 1588 when a storm drove it onto the rocks in Stroms Heelor cove. Over 300 sailors had to take refuge with the islanders for several weeks until the storms subsided enough that they could be taken to the authorities. The wrecked galleon was discovered in 1970.

There are 2 prehistoric sites on Fair Isle, a reminder that the island was settled as early as the Bronze age. At Landberg is an Iron age promontory fort, and at Kirkigeo is an ancient house beneath an early Christian settlement. 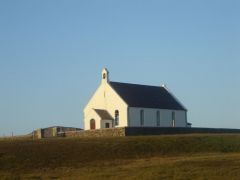 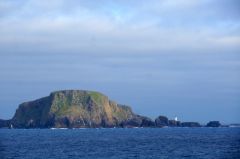 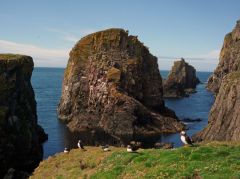 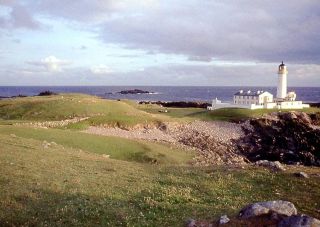 Nearby accommodation is calculated 'as the crow flies' from Fair Isle. 'Nearest' may involve a long drive up and down glens or, if you are near the coast, may include a ferry ride! Please check the property map to make sure the location is right for you.

More self catering near Fair Isle >> 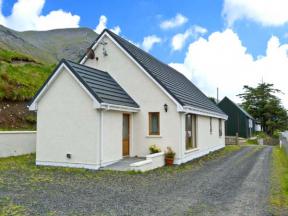 This is a very well presented detached cottage situated on a hillside on the magical Isle of Skye, 12 miles from Portree and can sleep four people in two bedrooms.
Sleeps 4 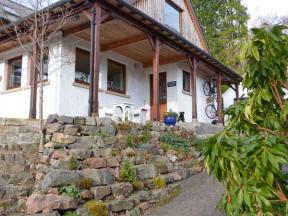 This semi-detached cottage in the Highland village of Corpach sleeps two people.
Sleeps 2