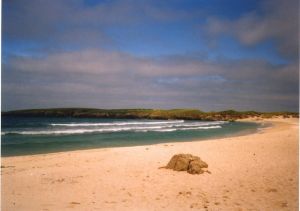 The National Trust for Scotland owns large parts of the Shetland islands of Unst and Yell, taking in a stunningly stark and beautiful region of undulating hills, a low, rocky coastline, beaches and cliffs. The islands are hugely important for their plant and bird life, as well as their geology.

The remote landscape creates a unique habitat for animal and bird life. Unst is the most northerly inhabited island in Britain and boasts a rocky shoreline dotted with sea stacks and interspersed with quiet beaches. Inland are moorland dotted with freshwater lochs.

Cliffs rise to as high as 170 metres high and offer a habitat to over 100,000 breeding seabirds. One of the best places for birdwatching is the Trust's Hermaness National Nature Reserve. The Trust also manages geologically important reserves at Lund, Woodwick, and Framgord. The only woodland on Unst is at Halligarth.

At the northernmost tip of Unst is Muckle Flugga lighthouse, built by the famous Stevenson family of engineers in 1858. One of the builders was Thomas Stevenson, father of author Robert Louis Stevenson. The young Robert visited the island and is thought to have used his visit as inspiration for his novel Treasure Island.

In the south of Unst stands Muness Castle, a 16th-century tower house built by the Chamberlain of Shetland and once leased by the Dutch East India Company as a storehouse. At Haroldswick are the remains of Viking longhouses, and at Lund, which is owned by the NTS, stand the remains of a 9th-century Norse settlement.

A different kind of tourist attraction is the famous Unst bus shelter at Baltasound. This extraordinary shelter is probably the most luxurious in the world. It is equipped with a television, sofa, flower baskets, an armchair, curtains, it even has its own website!

The island of Yell, by contrast, has large areas of moorland, with an internationally famous seabird population. The RSPB maintains bird reserves at Hascosay, Lumbister, and on islands in Yell Sound. The island is also one of the very best places in the world to see otters in the wild. There is a local heritage museum at Burravoe where you can find out more about the island's unique history and natural highlights.

In addition to the bird and animal life there are several heritage sites on Yell, including Iron Age settlements at Sellafirth and at Da Birrier. Look for the Gloup Memorial, commemorating a fishing tragedy in 1881.

There are regular ferries to both Unst and Yell from mainland Shetland. A ferry from Booth of Toft on the mainland goes to Ulsta on the southern tip of Yell, and from Gutcher on the northern tip of the island another ferry links to Belmont on Unst. 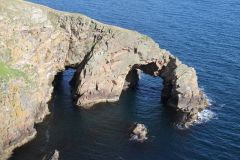 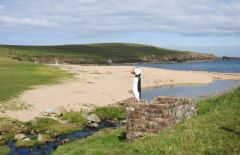 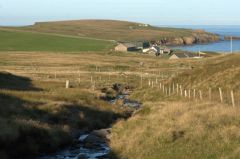 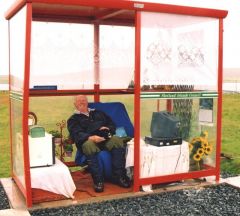 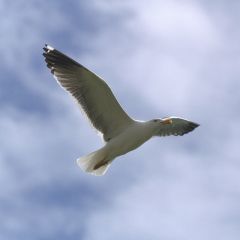 Nearest Accommodation to Unst and Yell:

Nearby accommodation is calculated 'as the crow flies' from Unst and Yell. 'Nearest' may involve a long drive up and down glens or, if you are near the coast, may include a ferry ride! Please check the property map to make sure the location is right for you.

More bed and breakfasts near Unst and Yell >>