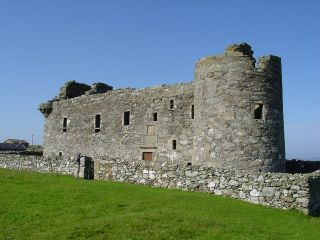 Muness Castle
This late 16th-century tower house is the northernmost castle in the British Isles. Built by the Chamberlain of Shetland in 1598, destroyed by French pirates in 1627, abandoned in the late 18th century, and now a roofless ruin.
History
In 1571 Laurence Bruce was appointed Chamberlain of Shetland by a distant relative, the Earl of Orkney. Bruce was a Lowlander and thought of the Scandinavian inhabitants of Shetland as a lesser people, there for him to exploit. And exploit he did.

Shetlanders were used to paying taxes in kind; that is, instead of money they gave goods, usually by weight or measure. Bruce set up a new system of standard measure, under his own control, and the islanders suddenly found themselves paying exorbitant amounts of goods. In a very short time Bruce became rich, safe in the knowledge that the Earl of Orkney seldom bothered with visiting the Shetlands, so he could act without fear of reprisal from his overlord.

Bruce also took a cut of the profits made by Dutch merchants who bought low and charged high prices for goods sold to the inhabitants. Worse, Bruce set up a gang of 'broken men', thugs who went with him from island to island, forcing crofters to put them up and feed them. In this way, Bruce and his men could eat what meagre food there was but avoid paying hard coin for it. 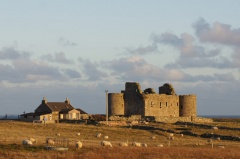 Muness Castle from the west
(c) Mike Pennington
The islanders complained loudly enough that a government Commission was set up to investigate, but Bruce went about his greedy business confident that he was above the law.

In 1598 he began a new fortified residence at Muness, on a Z-plan layout, with an elongated central block linked to two circular towers. Muness was no showpiece residence; the walls were pierced by numerous gunloops to defend the castle against attack.

But Bruce had finally made a mistake; overconfident in his own power, he did not seek the permission of his overlord, the powerful Patrick Stewart, Earl of Orkney, to build Muness Castle. Earl Patrick saw the castle as a direct challenge to his authority. He was prepared to launch an attack on his kinsman but desperate family negotiations pacified the Earl. 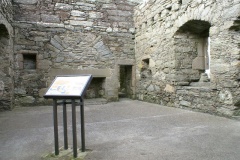 The Great Hall
(c) Mike Pennington
The reprieve was only temporary, for in 1627 a group of pirates from Normandy sailed  to Shetland and besieged Muness, heavily damaging the castle. Muness was left derelict, and stood so for 86 years, until in 1713 it was leased to the Dutch East India Company - not as a castle but as a simple storage space for goods the Company managed to salvage from a wreck of one of their vessels. Then the castle almost disappears from the historical record until 1775 when it is recorded as abandoned and roofless.

Muness Castle Today
The castle is laid out like a rectangle, with circular towers at diagonally opposite corners. The walls stand to two storeys most of the way around the perimeter, and the entire castle is contained within a low stone wall. The stonework detail is very finely crafted, with a section of corbel that once supported a corner stair now leaning out over empty space. Though looked after by Historic Scotland, the site is open at any time and is certainly one of the most intreresting historical monuments in Shetland.

Photos are copyright their respective photographers, and are republished with gratitude under a Creative Commons license

Nearby accommodation is calculated 'as the crow flies' from Muness Castle. 'Nearest' may involve a long drive up and down glens or, if you are near the coast, may include a ferry ride! Please check the property map to make sure the location is right for you.