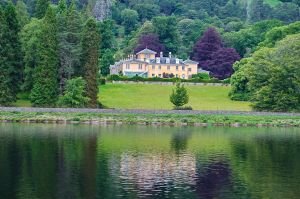 Dochfour House from across Loch Dochfour
Dochfour is a Victorian terraced garden surrounding a historic 18th-century house, home of the Baillie family for over 500 years. There are terraced Italianate gardens near the loch, and parkland rising to woodland above the house.

In 1442 Alexander Gordon, Earl of Huntly, was one of the royalist leaders at the Battle of Brechin, against the forces supporting the Black Douglases. One of Gordon's supporters was his cousin, Alexander Baillie. Baillie distinguished himself in the Battle, and Gordon rewarded him with the baronies of Dunain, Dochfour, Leys and Torbreck, and named him Constable of Inverness Castle. The Baillie family still retain Dochfour today, more than 560 years later.

Dochfour House stands on a rise of ground looking out over Loch Dochfour. The first house on this spot was burned during the Jacobite Rebellion in 1745 and rebuilt in 1780 in its current form. A family legend says that at the time of the Rebellion, the Baillie owner of the estate hid in a cave in the hill above the house to escape from English troops.

In 1839 Evan Baillie called in architect William Robertson to remodel the Georgian house in Italianate style, much like an ornate Italian villa. The house is a mix of styles, integrating the original Georgian building with Victorian and Edwardian renovations. The result has pleased royalty, for Prince Albert reportedly wrote to Queen Victoria in 1847 that Dochfour was 'beautiful, the house elegant with a fine garden'.

The house is set in 15 acres of wonderful formal gardens and landscaped parkland. Much of the terraced formal Italianate garden dates to the Victorian period while the parkland was laid out in the 18th century, at the same time as the house. Most of the garden was laid out by Evan Baillie, filling in the space between the house and Loch Ness to the south east, and was designed in Italianate style to complement the house. Included in the 19th century garden scheme are walled gardens, a water garden, rose gardens, topiary, kitchen gardens, and orchards extending down to the edge of the loch.

Behind the house the parkland rises to a wooded hillside where trails lead through Scots pine and stands of hardwood. At the top off the hill birch woodland gives way to open moorland.

In 1881 the gardens were expanded as part of a scheme which routed a railway through the estate. Part of the late Victorian garden was a Banana House (later demolished). A series of Long Walks were designed, lined with specimen trees and shrubs. In the Edwardian period yew hedges were planted to create small formal garden areas along the Long Walks. The yew is sculpted into attractive topiary shapes. Later additions include a Fountain Terrace, herbaceous borders, and an azalea bank.

Dochfour is now open primarily as an events venue, rented out for house parties, filming, and corporate events. We've been informed that it is not usually open to the general public, so we suggest you do NOT make plans to visit. We'll update this page as soon as this situation changes. You can actually get quite good views of the house and gardens from across Loch Dochfour, accessed on the south bank of the River Ness off the B862 between Aldourie Castle and Ballindarroch.

Nearby accommodation is calculated 'as the crow flies' from Dochfour House & Gardens. 'Nearest' may involve a long drive up and down glens or, if you are near the coast, may include a ferry ride! Please check the property map to make sure the location is right for you. 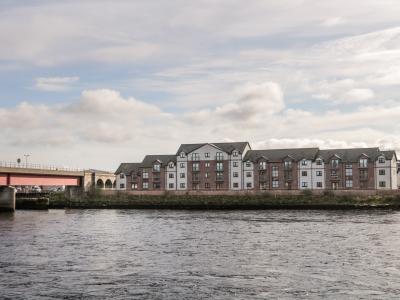 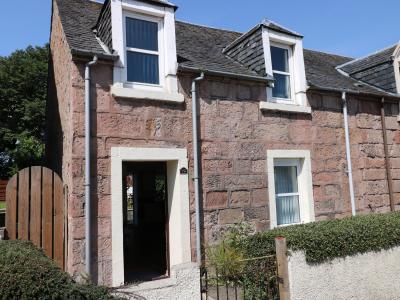 This semi detached cottage is situated in the village of Inverness, and can sleep four people in two bedrooms.
Sleeps 4