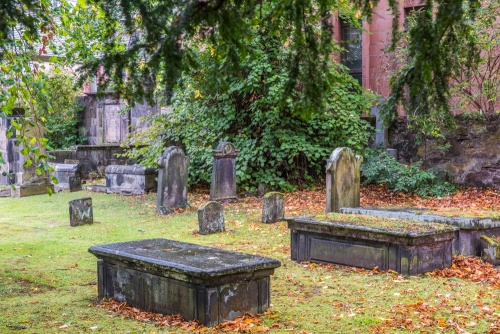 A short stroll from the Old High Church and one block up from the River Ness is Friar's Street, linking Friar's Lane and Glebe Street. The 'friar's' in question were the Dominicans, known as the Black Friars for the dark colour of their robes.

Tucked away on the north-east side of Friar's Street is a small burial ground, all that remains of the medieval Dominican friary on this site.

The friary was founded in 1233 by King Alexander II and dissolved in 1542 (other sources say 1556). According to legend, the Dominicans gave their records and their valuables to Alexander Cuthbert, Provost of Inverness, intending to retrieve them when it was safe for them to return. 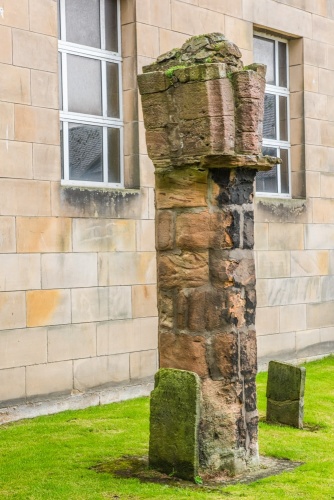 The Reformation prevented the order from ever returning, so after Cuthbert's death the city council asked his family to give them the Blackfriar's valuables. The family, however, disclaimed any knowledge of them. Did they keep the Blackfriar's belongings? Are the still hidden? Or did they ever exist? We will likely never know.

The only reminder of the friary buildings is a single column still standing to above head height and retailing its springers (the beginnings of supports for stone arches on either side).

In a corner of the burial ground is another medieval remnant; a very worn and almost life-sized carving of a knight in armour. This is said to be the grave slab of Alexander Stewart, Earl of Mar (c. 1375 – 1435). Stewart is best known as the victor of the Battle of Harlaw in 1411, where he saved Aberdeen from an attack by Donald, Lord of the Isles. Stewart later served as Sheriff of Inverness and died here in 1435. 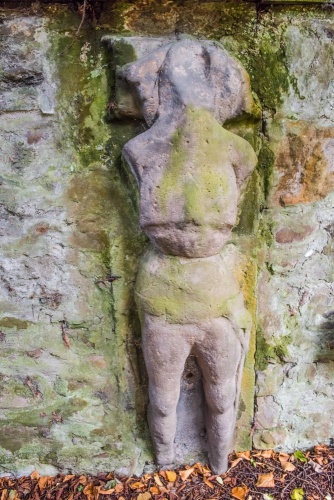 The weathered medieval effigy of a knight

The Blackfriars burial ground stands beside a modern building once used as a telephone exchange. According to local legend, the building is haunted two spectres; one is the ghost of a medieval friar and the other is a lady in black (it makes more sense that the lady in black is a black-robed friar).

Telephone exchange staff reported seeing a black-robed figure wandering among the gravestones on several occasions (though to be fair we didn't see any strange figures on our visit).

In addition to the medieval column and carved grave slab of a knight, there are several interesting old gravestones in Blackfriars. At the base of the medieval pillar is a very worn 17th-century gravestone, while on the north wall of the burial ground is an enclosure with the gravestone of William Chisholm, Provost of Inverness and younger brother of The Chisholm of Chisholm.

Just to confuse things Blackfriars is sometimes known as Greyfriars, which is puzzling as the 'grey' friars were the Augustinians, who never had a presence in Inverness. 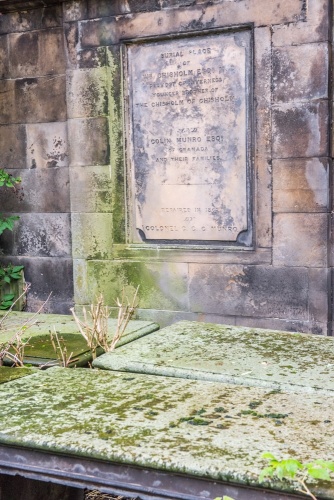 The Blackfriars site is one of the stops on the Inverness City Heritage Trust's City Centre Trail, linking heritage locations around the core of the city. A short stroll away on Chapel Street is another old burial ground on the Trail, the Chapel Yard Cemetery, also established by the Dominican friars.

Blackfriars is extremely easy to reach from Church Street. Simply walk to the north-west end of the street, turn left onto Friar's Lane and immediately right onto Friar's Street. The burial ground is to your right and is marked by a plaque at the gates.

The plaque tells the story of the burial ground in these words:

'The sandstone column and knight's effigy in today's graveyard are all that remain of the Dominican Friary built here in 1233. The Blackfriars preached in the town and surrounding area, dependant on gifts for their living. Once a thriving community, the friary was disbanded at the Reformation in 1556. The buildings soon became ruinous and were robbed for stone for Cromwell's fort and the castle.'

Nearby accommodation is calculated 'as the crow flies' from Blackfriars Burial Ground. 'Nearest' may involve a long drive up and down glens or, if you are near the coast, may include a ferry ride! Please check the property map to make sure the location is right for you.