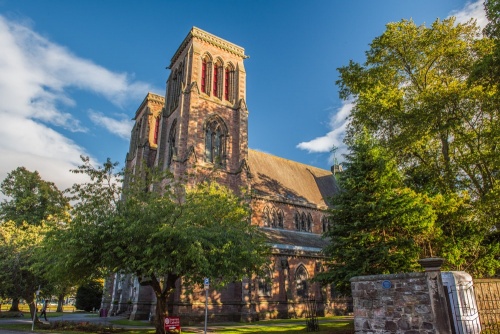 Inverness Cathedral stands on the west bank of the River Ness in the centre of the city, opposite Inverness Castle. It was one of the first cathedrals to be built in Britain after the Reformation.

Until 1853 the bishopric of Moray was based in Elgin. Bishop Robert Eden moved the bishop's seat to Inverness and began worship in a Mission church on Bank Street, on the east bank of the river. Under Bishop Eden's leadership, it was decided to build a new cathedral for a united diocese.

Work began in 1862, and the foundation stone was laid by Dr Charles Longley, the Archbishop of Canterbury in 1866. This was the first official act by an English Archbishop since the Scottish Presbyterian Church was founded in 1689. The new cathedral was finally opened for worship in 1869.

The new building was designed by local architect Alexander Ross who was himself a member of the congregation. Ross' design used the Decorated Gothic style to create a wonderful example of 19th-century architecture.

The cathedral is made of Red Tarradale Stone, whose reddish colour is a common sight in Inverness buildings. The layout is simple, with the interior divided into five bays by pillars of granite from Peterhead. The beautiful stained glass windows were made by the famous Hardman studio in Birmingham. 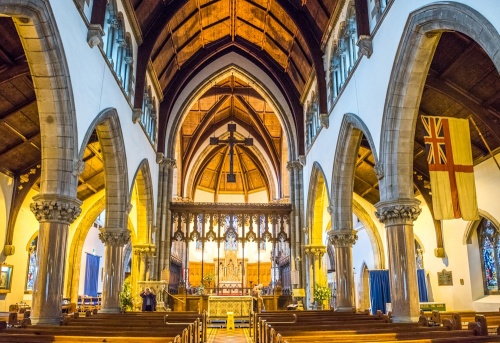 The high altar and the reredos behind it are carved from Caen stone, the very same stone used so frequently in medieval cathedrals.

You enter by the west door into a vestibule leads directly into the nave. The west window above you is one of the cathedral's highlights. It was created in honour of Bishop Eden and depicts Christ in Glory at the Last Judgement. This is one of the largest and most impressive stained glass windows in Scotland.

The nave is 90 feet long and 60 feet wide. The chancel is also exactly 60 feet wide. Each of the nave arches is carved from a single block of granite. The pillar capitals are richly carved with foliage, birds and flowers. Over the capitals are small carved heads representing prominent people.

Curiously, only the identity of three figures are known; the first two figures on the left are Bishop MacLean and the architect Alexander Ross. Opposite are Bishops Kelly and Eden. The identity of the other figures is a mystery.

Over the entrance is a small bust of Bishop Robert Eden, the man who inspired Inverness Cathedral In the north aisle is a painting illustrating the consecration of the first American bishop, Samuel Seabury, by the Bishop of Aberdeen and Moray in 1784. 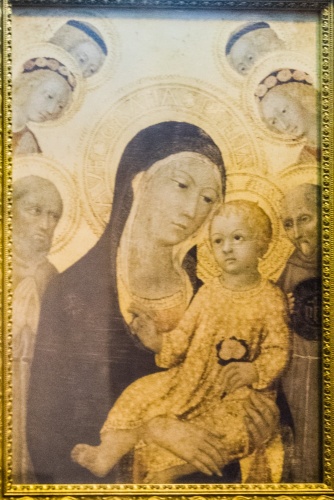 Also in the north aisle are 19th-century Russian ikons given by Tsar Alexander II of Russia to Bishop Eden in 1866 when the Bishop visited Anglican congregations in Russia. With the 19th-century ikons is an earlier 18th-century embroidered likeness of St Michael the archangel with St John the Warrior.

Moving down the north aisle you come to perhaps the historical treasure of Inverness Cathedral, a 15th-century painting of Our Lady and the Christ Child by Sano di Pietro of Siena. The north aisle gives access to the Lady Chapel where on the wall you can see a marble plaque brought here from the Old High Church. It commemorates Bishop William Hay (d 1707).

At the north-east corner of the nave is the pulpit, a wonderful piece of sculpture made from Caen stone and Irish marble. It stands on granite pillars from Abriachan. The pulpit stands beside the chancel screen, created by Sir Robert Lorimer in 1923. The screen acts as a memorial to parishioners who died in WWI. 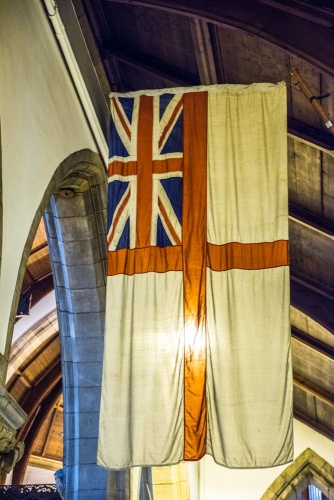 The White Ensign of the Royal Navy

The chancel stalls are made of Austrian oak. The stalls are carved with the traditional symbols of the Four Evangelists.

In the south aisle is St Andrew's Chapel, designed as a memorial to the wife of Bishop George Seaford. In the chapel hang the white ensign of the Royal Navy. The ensign formerly flew from the Cenotaph in London and was brought here for safekeeping.

At the west end of the aisle is the extraordinary font, a copy of the kneeling angel font designed by Bertel Thorvaldsen in Copenhagen. The one difference is that the angel's face is that of the donor's wife.

In front of the font is a touching painting depicting poor fishing families of Stonehaven with a newborn baby in a creel. The families hold the baby up to a prison cell, where their priest has been imprisoned. The painting recalls the turmoil of the late 18th century when clergy of the Episcopal Church were thrown into prison for conducting public worship. Government authorities were concerned that these public events might be used as a meeting place for Jacobite plotters.

Inverness Cathedral is extremely easy to find. It is at the junction of Ardross Street and Ness Walk, on the west bank of the River Ness, a very short stroll from Ness Bridge. There is a large pay and display car park immediately beside the cathedral on Ness Walk. The cathedral is open daily and welcomes visitors. 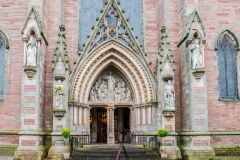 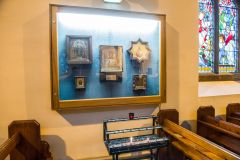 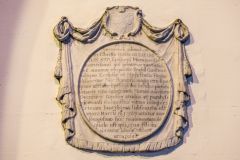 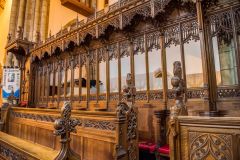 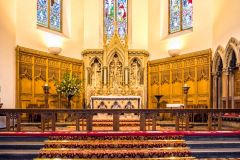 Nearby accommodation is calculated 'as the crow flies' from Inverness Cathedral. 'Nearest' may involve a long drive up and down glens or, if you are near the coast, may include a ferry ride! Please check the property map to make sure the location is right for you.

More self catering near Inverness Cathedral