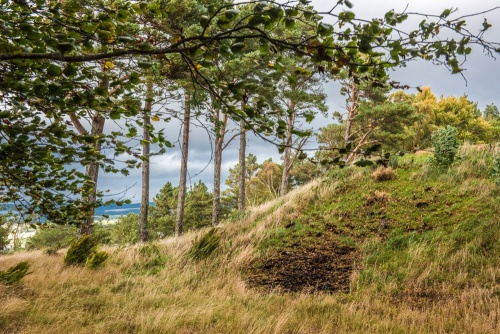 Looming on a wooded hilltop overlooking Inverness is Craig Phadrig hill fort, an Iron Age fortification begun around 300 BC. Craig Phadrig is perhaps the best-known vitrified hill fort in Scotland.

Vitrification is simply the scientific name for burning, usually with such intense heat that the stone walls of the fort are left partially fused together. In the case of Craig Phadrig temperatures are estimated to have reached some 1200 degrees Celsius.

Curiously the hill fort was burned and then abandoned shortly after it was built, then around AD 400-600 it was re-occupied by a Pictish king. Craig Phadrig has been called the original Inverness.

The name comes from the Gaelic words for creag (rock) and Phadraig (Patrick), so Craig Phadrig means literally Patrick's Rock.

While we can date the beginnings of Craig Phadrig with reasonable accuracy, it isn't clear why it was abandoned. Centuries later it was re-occupied by the Picts and used as an important tribal centre. One of the Pictish kings was Bridei, or Brude. Around AD 565 St Columba journeyed up the Great Glen from his base on Iona in an attempt to convert the Picts to Christianity.

According to tradition, St Columba found the gates to King Bridei's fort closed, so he made the sign of the cross and gates burst open. The story goes on to say that Columba met King Bridei and converted him to Christianity. Unfortunately, there is no historical evidence to support the tradition, though it seems certain that St Columba did indeed make an attempt to convert the Picts in this area. 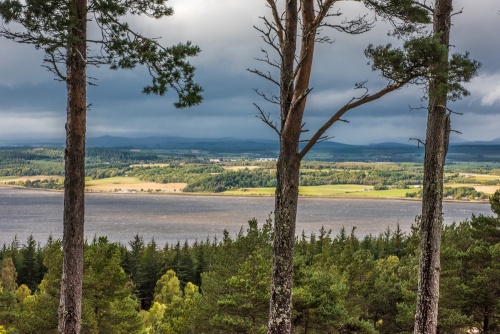 The Beauly Firth from atop Craig Phadrig

The location of Craig Phadrig makes perfect sense from a strategic point of view. The fort, along with a second fort on Ord Hill, controlled important transportation routes into the Highlands and overlooked the mouth of the River Ness. Both forts were begun in the Iron Age and re-used in Pictish times, though probably not at the same time.

The fort is oval in shape, measuring about 245 by 75 feet (75m by 25m), protected by an inner wall 30 feet (10m) thick and an outer wall built into a terrace further down the hillside. An estimated 25,000 tons of stone was used in constructing the fort walls.

The outer wall is not perfectly concentric but conforms to the contours of the hillside, varying between 45 and 75 feet (15m to 23m) outside the inner earthwork. There is also an additional earthwork below the outer wall on the eastern slope.

The inner wall varies in height, surviving to about 4 feet (1.2m) above the level of the fort interior. 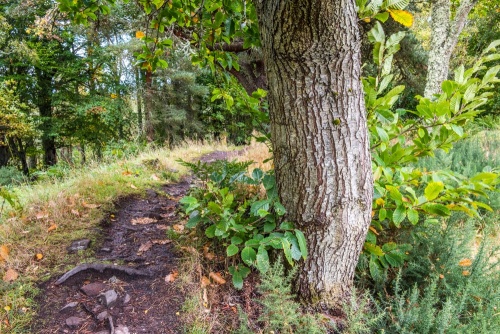 Trees grow from the earthwork bank

The hill fort was first excavated 1777. Archaeology was not very advanced at the time and the investigators speculated that the fort was, in fact, the remains of an extinct volcano. A later investigation uncovered what appears to be a small cistern but this is no longer visible. Excavations in the 20th century found evidence of metal-working.

In 2015 a violent storm caused two trees growing on the earthen ramparts of Craig Phadrig hill fort to fall down. Archaeologists took advantage of the damage to dig an exploratory trench through the fort rampart. To their astonishment, they found an intact stone wall just underneath the turf covering. The stone wall was 20 feet (6.5m) thick and stood up to 19 feet (5m) high. It would have been topped by a timber palisade.

What we see today are raised earthwork banks protecting an oval space. There are no obvious features inside the banks, but you can walk along the banks for the entire perimeter of the hill fort. It really is quite an impressive site, and the views over the Beauly Firth below are spectacular. 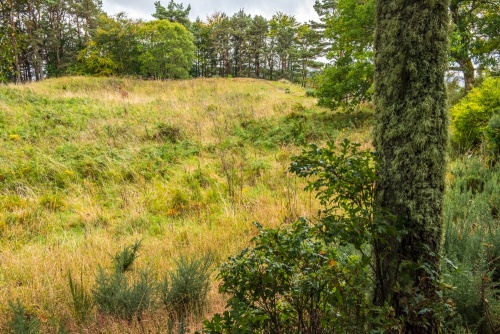 Craig Phadrig is easy to reach from central Inverness by car.

Do not do what we did and trust the official post code. Our satnav took us along the A82 towards Fort William before turning off just outside Inverness and taking us through a convoluted maze of housing developments.

The best route is to take the A862 towards Beauly. After the canal bridge at Muirtown turn left onto King Brude Road at the second set of lights (signposted to Leachkin). Turn right at the next lights, again signed to Leachkin. After 500m turn right onto Leachkin Brae and the car park is ahead on your right.

There are two colour-coded trails that link together. The shortest at 1.25 miles (1.9km) is the Hill Fort Trail, which loops around the Iron Age fort atop the hill and gives access to the interior of the fort on the hill summit. It is well worth your exertion to climb to the hill fort as the vies over the Beauly Firth are fabulous. Be aware that it can get windy on the hilltop.

Allow 3/4 of an hour for this trail. The slightly longer Craig Phadrig Trail extends the route through beautiful woodland. This trail takes 1.5 miles (2.3km) in total.

Both trails are moderate, with some steep sections and occasional muddy patches in wet weather. Good waterproof footwear is definitely a good idea though I found most of the route relatively easy going. 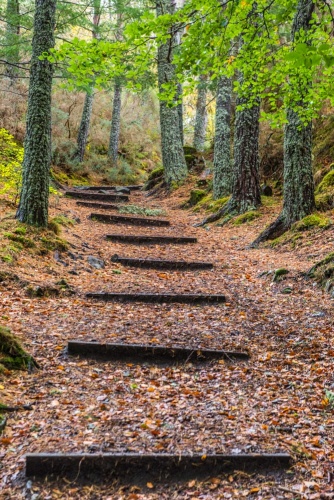 Climbing to the hill fort

Nearby accommodation is calculated 'as the crow flies' from Craig Phadrig Hill Fort. 'Nearest' may involve a long drive up and down glens or, if you are near the coast, may include a ferry ride! Please check the property map to make sure the location is right for you.