HERITAGE HIGHLIGHTS:   One of the best-preserved prehistoric sites in Scotland. 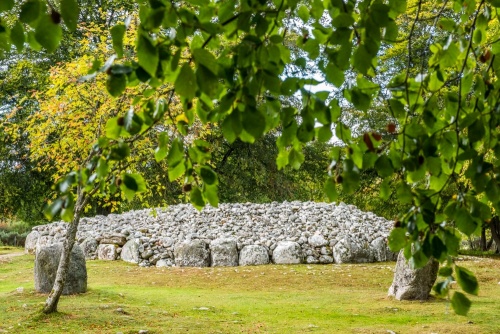 Clava Cairns is an exceptional Bronze Age burial complex, one of the most archaeologically important prehistoric sites in Scotland. Clava is a group of prehistoric burial cairns dating to around 2000 BCE, comprising ring cairns, a kerb cairn, passage graves, and standing stones. Nearby is a ruined chapel of much later date.

The style of kerb cairn is common to the Moray Firth area and they are called 'Clava cairns' after this site.

Clava was built in two stages. The first stage began around 2000 BC when a row of burial cairns was constructed - a form of linear cemetery. Three of these early cairns can still be seen, though there were probably two more.

Around 1000 BC the cemetery was reused, with some new burials inserted in the existing cairns and three new monuments constructed, including the kerb cairn. Another, smaller, cemetery can be found at Milton of Clava, just to the west.

No trace of any actual burial has been found in any of the Clava Cairns, though it seems safe to assume from similar monuments that there was at least one body buried in the centre of each cairn. 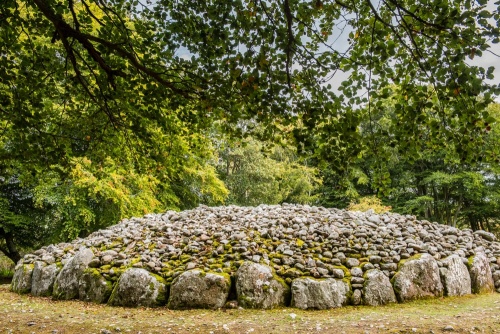 It seems that each tomb was used for only a short period of time, and after it was 'decommissioned' a ring of standing stones was erected around it.

It seems likely that there was a settlement here before the cemetery was built, and that some of the settlement stones were incorporated into the burial cairns. An archaeological survey in the 1990s noted a possible alignment of the Clava monuments with the position of the setting and rising sun.

The site is somewhat more difficult to interpret than it might have been due to a well-meaning Victorian landowner. When the site was first investigated in the 1870s the burial cairns were interpreted as Druid's temples, in keeping with the Victorians' romanticised view of the past. The landowner thought that a Druid's temple should be set in a grove of trees, so he planted trees around the three largest monuments.

The landowner's workmen also moved a pair of standing stones to make room for the road that now runs beside the site. The robbed stones from the cairns to build the stone wall that acts to separate the cairns from the road. Perhaps it was because of these 'improvements that Clava Cairns became one of the first ancient sites in Britain to be protected under law. 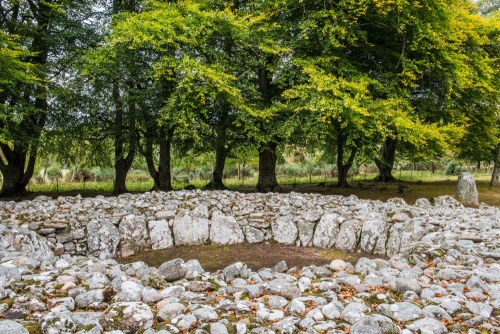 Clava has become immensely popular in recent years due to its links to the Outlander books and TV series. In the books, a British Army nurse on her second honeymoon falls through a time portal at a ring of stones called Craigh na Dun and is transported back to 1743.

The Clava Cairns are said to be the inspiration for Craigh na Dun and certainly resemble the cairns used during filming. What used to be a quiet archaeological site is now a must-see destination for Outlander-themed Highland tours, and you can usually find tour buses full of Outlander fans arriving to explore the site.

Is Clava the real Craigh na Dun? That's never been officially confirmed, but that doesn't stop Outlander fanatics from arriving in droves. We've visited several times, and can categorically state that we've never yet fallen through a time portal at Clava.

Perhaps the most impressive of the large cairns, this s the first cairn you come to. Here you can follow a passageway to the centre of the cairn, to a large, circular burial chamber. This passageway was built to align perfectly with the sun on the shortest day of the year. Sunlight streams directly along the passage and illuminates the central chamber. The chamber shows evidence of a corbelled roof, with the highest stones overlapping the ones beneath.

The second cairn you come to is quite different from the first. This is a ring cairn, which has a central chamber but does not have any apparent way to reach it. There is no passageway like the North-east Cairn. One theory put forward by archaeologists is that the ring cairn was a ceremonial site, like a temple. Excavations showed evidence of burning in the central chamber, perhaps related to ritual observances.

Together with alignments at the other two large cairns, this seems like strong evidence that the cairn-builders had a strong relationship with midwinter ritual observances. Three pathways made of cobbles link the kerb to the stone circle that surrounds it. 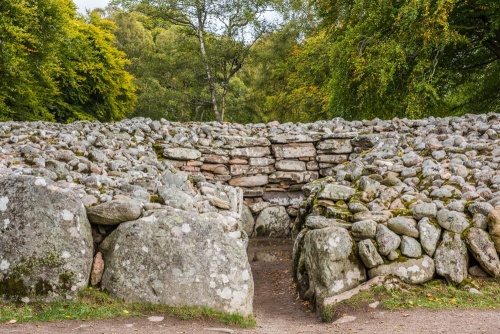 Fragments of flint found by archaeologists suggest that there was a settlement at Clava before the cairns were erected. A pair of pottery vessels were found in the chamber, each containing burnt bone. These bones probably date to 1000 BC, when the cairns were re-used 1,000 years after they were built.

The smallest of the monuments and almost certainly the last to be built, the kerb cairn was probably erected around 1000 BC, roughly 1000 years after the 3 large cairns. It consists of a circle of small boulders around a low mound. The mound probably covered a grave, though no body was found when the cairn was excavated in the 1950s. Around 600 AD a Pictish cremation burial was made next to this cairn.

The boulders are arranged in order of height, from the largest at the south-west to the smallest at the south-east. The stones seem to alternate between white and red/pink coloured. There is also a large, flat stone on the east side which seems to be acting as a threshold. This is decorated with cup marks. 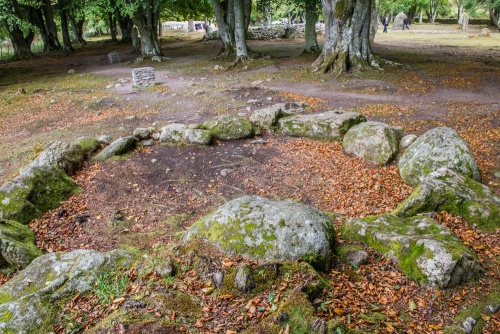 Most people miss this small cairn, which stands a 5-minute walk south of the other cairns. Simply walk straight along the road from the far end of the Clava site and after 5 minutes you will come to a signposted gate on the left of the road. The gate gives access to a short path into a field where you will see the ruins of a small cairn. Beyond the cairn are the ruins of a medieval chapel.

The cairn has had many of its stones re-used for other purposes and is the least impressive of the Clava Cairns. What you can see today is a solitary standing stone overlooking a turf-covered mound. One one side of the cairn is a large slab decorated with cup marks.

There may be a second cairn under the remains of the medieval chapel. We know very little about the chapel's history save that it seems to have been dedicated to St Bridget. Local tradition says that the graveyard was used to bury unchristened children. It takes some imagination to interpret the scattered stone remains, which are in poor condition and covered by turf.

There is a third cairn in the farm field (not accessible by visitors). All three cairns align with the midwinter sunset, again emphasising the importance of this time of the year to the cairn builders. The three cairns at Milton of Clava may have been intended as a completely separate cemetery to the main Clava Cairns grouping. 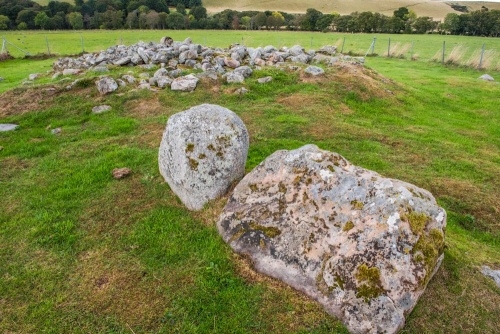 Clava is in the care of Historic Scotland, and open at any reasonable time. It is amazing to think how many tourists flock to see Culloden Battlefield each year, yet how many make the short journey to see these wonderfully atmospheric remains at Clava? 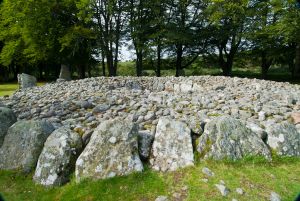 Nearby accommodation is calculated 'as the crow flies' from Clava Cairns. 'Nearest' may involve a long drive up and down glens or, if you are near the coast, may include a ferry ride! Please check the property map to make sure the location is right for you.

More self catering near Clava Cairns >> 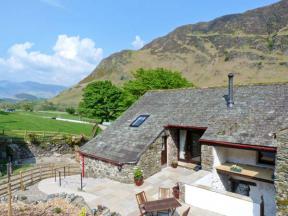 This first floor barn conversion is situated on a working farm in the Newlands Valley and is five miles from Keswick, and can sleep four people in two bedrooms.
Sleeps 4