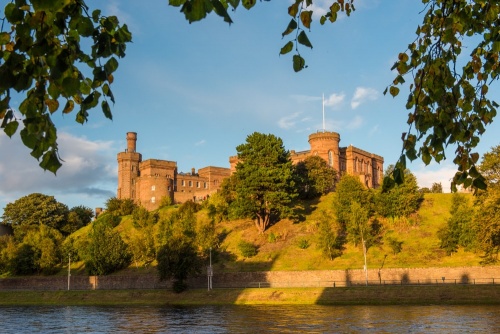 Inverness Castle and the River Ness

Inverness Castle is an imposing Victorian building on a rocky outcrop overlooking the River Ness. The current 19th-century castle is just the latest in a series of fortifications dating back to at least the 11th century, though not all were on the same site.

William Shakespeare has Inverness Castle as the site where Duncan is murdered by Macbeth in 1040. The playwright took liberties with history, however, as Duncan actually died in battle near Elgin. The castle that Shakespeare used as the setting for Duncan's murder was located several miles south of the current riverside site.

In 1057 Malcolm III built a new castle on the present site after destroying Macbeth's earlier fortress at Crown Hill. The 11th-century castle was occupied by English troops in 1303 as part of Edward I's attempts to seize Scotland. In 1308 Robert Bruce recaptured the castle and had it destroyed to prevent it from being used by the English. 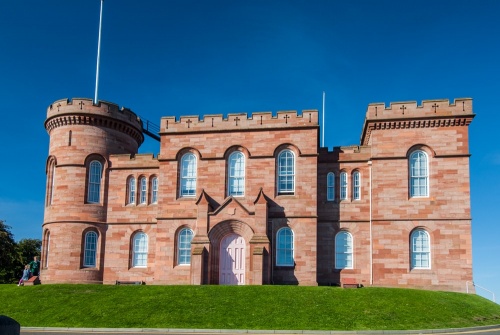 In 1410 Donald, Lord of the Isles attacked Inverness. This prompted the Earl of Mar to rebuild the earlier castle two years later. Sixteen years later Inverness Castle was the setting for King James IV's bid to break the authority of the Lords of the Isles. King James occupied the castle and invited Alexander MacDonald, Lord of the Isles to appear before him. as soon as Alexander appeared he was thrown into prison along with other Highland lords who had defied royal power in the Highlands.

After spending some time in prison Alexander was released, but he almost instantly launched a fresh revolt and led a large force of soldiers on Inverness in 1429. MacDonald sacked Inverness but was eventually forced to submit to the king. That did not stop his successor, John MacDonald of Islay, from attacking Inverness Castle on three separate occasions. After each attack, the castle defences were strengthened.

In 1508 the Earl of Huntly was appointed hereditary keeper of Inverness Castle. In 1548 the 4th Earl rebuilt the castle in stone. In 1562 the Earl refused to allow Mary, Queen of Scots to enter the castle. His defiance prompted an immediate attack by loyal soldiers drawn from the Fraser and Munro clans. Mary's forces captured the castle, but oddly, the Gordons of Huntly were allowed to continue as keepers. They transformed the castle into a comfortable residence with opulent staterooms. 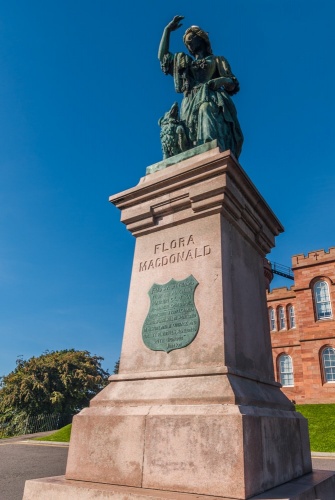 In 1644 the castle was occupied by Covenanter troops who repulsed a siege by the Royalist leader General James Graham, Marquis of Montrose. Royalist soldiers supporting Charles II eventually captured the castle in 1649 but surrendered it to a Covenanter army under General Leslie.

In 1652 Oliver Cromwell began building a new fortress at Inverness, closer to the mouth of the River Ness, using stone taken from churches in the region. The new fortification was known at the time as 'The Sconce' but is now known simply as Cromwell's Fort, or Citadel. The only part of Cromwell's fort to survive is the clock tower and a section of ramparts.

Inverness Castle was captured by Bonnie Prince Charlie in 1746, but after the Jacobites were defeated at the Battle of Culloden government forces destroyed the castle. 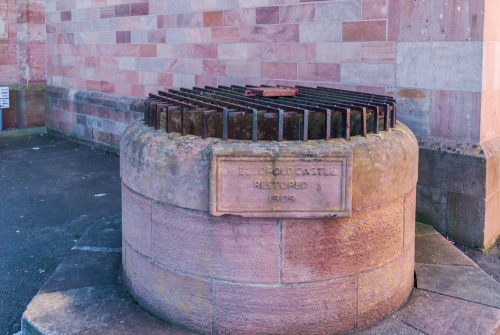 The final phase in the castle's long history came in 1836 when architect William Burn designed new buildings in castellated style. he first was used as the County Hall for Inverness-shire while the second, built in 1848, was used as Inverness gaol, though it was later converted to be the Sheriff's Court. This 19th-century version of the castle is made from striking reddish sandstone.

Only two parts of the medieval castle survive. In between the County Hall and Sheriff's Court is the castle well, restored in 1909. A short section of retaining wall is the only other part of the medieval structure intact today.

In front of the castle is a statue of Flora MacDonald and her dog. MacDonald is famous for her role in helping Bonnie Prince Charlie to escape capture by government forces, even though she herself was not a Jacobite supporter. The sculpture was created by an Inverness native, Andrew Davidson, and was erected in 1899.

Since the castle is still in use as a Sheriff's Court and for government proposes only one tower is open to visitors. The tower, known as Inverness Castle Viewpoint, gives wonderful 360-degree views over Inverness and the River Ness. Even if you don't ascend the tower you can still get outstanding views across the river to Inverness Cathedral on the far bank.

As you explore the castle site you will notice small posts in the ground, each with a date and historical event. The posts are arranged as a timeline tracing the castle's long history and are extremely well done, giving you an excellent overview of the castle's heritage.

Inverness Castle is very well signposted around Inverness town centre. It stands directly above Inverness Museum at the top of Castle Wynd. There is easy pedestrian access from High Street at the east end of Ness Bridge. There is no public parking on site but there are paid parking areas nearby. The best views of Inverness Castle are from the opposite (west) side of the River Ness on Ness Walk.

Nearby accommodation is calculated 'as the crow flies' from Inverness Castle. 'Nearest' may involve a long drive up and down glens or, if you are near the coast, may include a ferry ride! Please check the property map to make sure the location is right for you.

More self catering near Inverness Castle