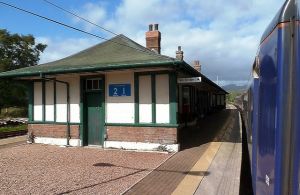 Housed in the historic Rannoch Station railway buildings, the centre encourages visitors to learn more about one of Scotland's greatest landscapes whilst appreciating the engineering brilliance of the Victorians who built the West Highland Line.

The railway line was begun in 1889 to link Glasgow with Fort William. It was later extended to Mallaig. Building the railway across Rannoch Moor was an exercise in engineering skill - and patience! The engineers had to deal with the uncertain moorland soil and the soft peat. Their solution was to bring in thousands of tons of earth and ash, and lay a bed of tree roots and underbrush.

The unusual brushwood bed encountered problems right from the start, and the line was threatened with bankruptcy even before it was completed when the brushwood raft kept sinking into the soft moorland ground. It was only rescued when James Renton, one of the company directors, put his own money into the project. Renton's contribution is remembered by a sculpture at the north end of the station platform. The line across the Moor was opened in 1894.

As part of the new rail line, a station was built with a crossing loop, with a platform between 2 sets of tracks. There were originally sidings on both sides of the station, but the east siding was later removed. Also on the east side is a turntable for engines.

The remarkable story of the West Highland Line is told in the small visitor centre attached to the station house, beside the tea room. The visitor centre also acts as a point of introduction to the Moor, with information on walking routes, as well as detail on the amazing geography of this stunning landscape.

The station can be reached by road, at the very end of the B846 from Kinloch Rannoch, or, of course, by train. The station is on the eastern side of the Moor, and there is no direct access to popular areas on the west like Glen Etive and Glen Coe, other than on foot.

Rannoch Moor is one of the great wild areas of Britain, an area of mountains, bogs, lochs, rivers, and rock. Wildlife includes red and roe deer, with an abundant bird population and a wealth of insect and plant life. The best way to get an overview of the moor is to take the West Highland Line rail journey, but if you want something a bit more challenging there are a large number of walking trails and cycling routes. Departing from Rannoch Station is a 9-mile linear walk to Corrour, on Loch Ossian.

Beside the station is the popular Moor of Rannoch Hotel. The hotel bills itself as the perfect place to escape, and with no TV, wifi, or mobile connection, and set in 130km of uninhabited moorland, they may be right! 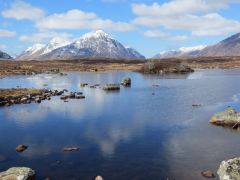 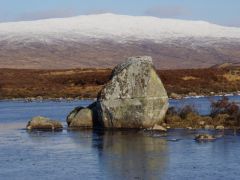 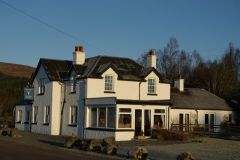 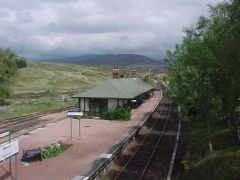