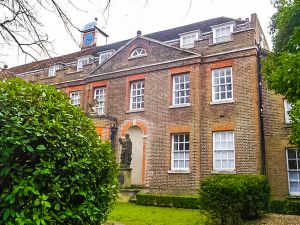 Southside House
Southside House is a William and Mary mansion that has been the home of the Pennington Mellor Munthe families for generations. Well restored, it illustrates the family history down the generations. The same family owns another historic house, Hellens, in Herefordshire.

The house stands on the south side of Wimbledon Common. In 1687 Robert Pennington came to Wimbledon from London after the death of his son from Bubonic plague.

Perhaps he wanted a fresh start, or simply thought that Wimbledon, then a village, far from the urban squalor of London, might be a healthier place to live. He called upon Dutch architects to design a house based around an already existing farmhouse on the site.

The house was enlarged in 1776, but even before then the Penningtons were welcoming some of the most important figures in high society to their rural retreat. Frederick, Prince of Wales came here in 1750, and later visitors included Admiral Nelson, with Sir William and Emma Hamilton.

The interior features a galleried hall, with 17th-century fireplace, and a wealth of 18th-century panelling. Much of the original furniture remains, including a large collection of art.

The house passed from the Penningtons to the Munthe family when Hilda Pennington married Axel Munthe, a Swedish doctor. Axel was also the author of 'The Story of St Michele', one of the 10 best-selling books of the 20th century.

The house was damaged by bombs in WWII and carefully restored by Major Malcolm Pennington Munthe. Major Munthe served in the SOE, working behind enemy lines in Scandinavia, and was wounded in the Anzio landings.

He returned from the war to recover and spent years restoring Southside and Hellens to their historic best. The house is frequently used for musical events, art workshops, and as a creative resource by art groups.

Southside house is set in magnificent gardens created as a series of garden rooms linked by pathways and water features. Classical follies are dotted throughout the garden, with wilderness areas blending with clipped hedges and half-hidden statues to create a constant sense of surprise and delight.

More self catering near Southside House >>