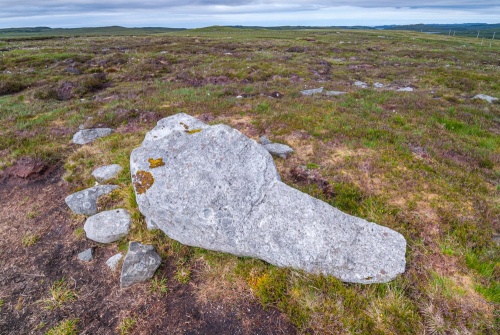 Achmore Stone Circle is a partially-preserved stone circle in peat moorland outside the village of Achmore (Acha Mor) in central Lewis. The circle was exposed during peat-cutting in 1981 and many of the stones are embedded in the surrounding peat.

Only two stones remain upright and they lean at a distinct angle. The stones lie along a circle with an estimated diameter of 41m (134 feet). It is remarkable that any of the stones have been found, as the peat here can reach well over 1m deep. 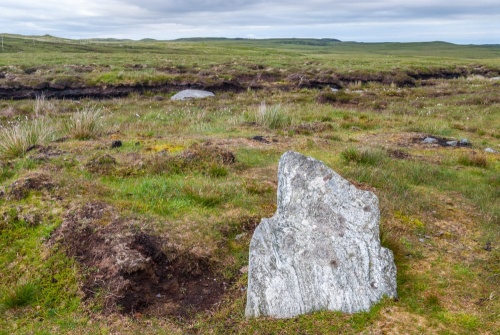 A standing stone protruding from the peat

The crofters got to talking and mentioned that another crofter of their acquaintance at Achmore, six miles to the east, had been finding what appeared to be the remains of a stone circle as he cut peat for fuel each year.

Intrigued, the two amateurs went to Achmore to have a look. They found one upright stone and several more prone slabs that had been exposed by peat cutting. In all, eight prone stones were found, each with small packing stones at their bases. The eight prone stones lay on an arc, which, if extended, took in a larger circle that cut through a raised area where the peat had not yet been cut back. 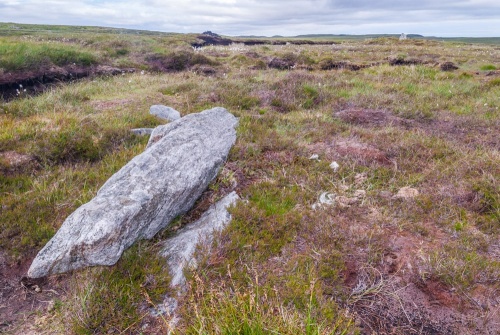 The archaeologists then probed with a graduated metal rod and found six more stones and another four completed embedded in the peat, at depths from 0.5m-1m below ground level.

In 1984 archaeologists took peat samples with an idea to perform C-14 analysis (Carbon dating) and pollen examination, but, as far as we are aware, this analysis was never done, or, if it was, never published.

The name 'Achmore Stone Circle' is somewhat confusing; Ordnance Survey maps of the area show the village name as both Achmore (without an A) and Achamore (with an A). The official listing from the National Record of the Historical Environment (Canmore) gives the name as Achmore, which is what we've gone with. 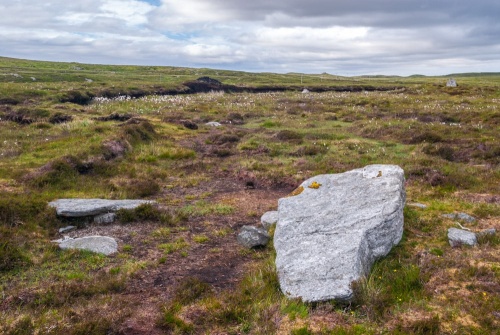 From Stornoway, take the A859 south and turn off on the A858 (signposted to Bearnaraigh and Uig). Just before you reach Acha Mor you will see a gravelled lay-by on the right and a blue footpath sign labelled Achmore Stone Circle.

Take the footpath, which follows a rough track for about 200m onto a low rise of moorland, where you will find the remains of the stone circle. There were no information panels when we visited, which is a shame, but I understand that one has since been erected.

Achmore Stone Circle must be one of the least known historic sites in Scotland. It would not surprise me if many residents of the Isle of Lewis have never heard of it. The stone circle doesn't make it into guidebooks or tourist brochures. We discovered it by pure accident when we drove past the small and easily-missed footpath sign to the circle just east of Achamore village on the A858.

Nearby accommodation is calculated 'as the crow flies' from Achmore Stone Circle. 'Nearest' may involve a long drive up and down glens or, if you are near the coast, may include a ferry ride! Please check the property map to make sure the location is right for you.