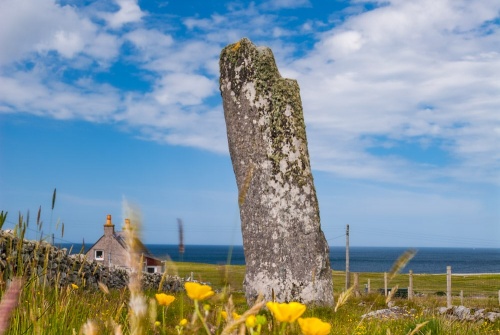 Clach an Truiseil is the tallest standing stone in Scotland at over 19 feet high (5.8m), with another 6 feet (2m) underground. Local tradition says that the stone marks the site of a clan battle between the Macaulays and the Morrisons or, alternatively, the grave of a Norse warrior killed in battle. Yet another theory suggests that it was a landmark for sailors.

If the stone's origins are uncertain, so too is its name. There doesn't seem to be any consensus on the proper name of the monolith, which you will find called The Trusal Stone, Trushal Stone, Trushel Stone, Clach an Trushal, and the Stone of Compassion.

The official listing at the National Record of the Historical Environment (Canmore) calls it Clach an Trushal. The site is shown on Ordnance Survey maps as Clach an Truiseil, so that's what we've gone with.

The stone is roughly 6' wide at its greatest point, and 3'9" thick. The lower half tapers slightly, and the upper half has a distinct taper to the rounded top, which is only 1' wide.

Remains of a Stone Circle

An investigation in 2002 revealed that several large stones that may have been part of a stone circle have been incorporated into two nearby stone walls that run parallel to each other on either side of Clach an Truiseil. These walls were built sometime around the period 1898-1920.

The standing stones vary in shape but most are about 1.5 long, meaning that Clach an Truiseil would have towered over them. Curiously, it seems that Clach an Truseil did not stand at the centre of the circle, nor was it incorporated into the circle itself. Instead, it stood off-centre, which makes one wonder why the circle was arranged as it was. 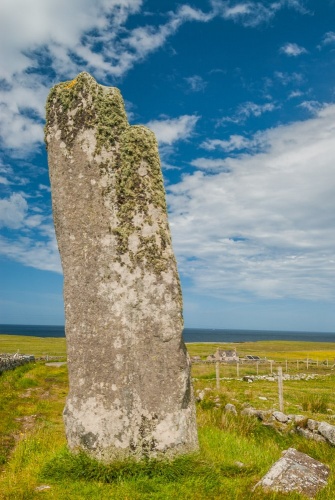 The stone from the south-east

The standing stones vary in shape but most are about 1.5 long, meaning that Clach an Truiseil would have towered over them. Curiously, it seems that Clach an Truseil did not stand at the centre of the circle, nor was it incorporated into the circle itself. Instead, it stood off-centre, which makes one wonder why the circle was arranged as it was.

The stone stands on a gentle slope that appears to have been modified to create an almost level platform, which would have made a good base for a stone circle.

Two stones lie at the base of Clach an Truiseil. One is thought to have broken away from the top of the monolith and the other from its side. This would mean that the stone was originally even taller and wider than it now appears.

Thirty-five metres away to the north-east is a large recumbent slab that may have been an outlier for the stone circle as it also measures 1.5m long.

Clach an Truiseil stands behind a row of houses in Ballantrushal, just south of Shader, on the west coast of Lewis. From Stornoway, take the A857 north and turn right at its junction with the A858 near Barvas.

Follow the road through Barvas and Upper Barvas to Ballantrushal (Baile an Truiseil). Turn left onto the minor road through the village and then left again (signposted 'Truiseil Stone'). You will see Clach an Truiseil rising behind the houses on your left. There is a small parking area on your right, opposite the stone, which is easily visible on a small rise.

Nearby accommodation is calculated 'as the crow flies' from Clach an Truiseil Standing Stone. 'Nearest' may involve a long drive up and down glens or, if you are near the coast, may include a ferry ride! Please check the property map to make sure the location is right for you.

More self catering near Clach an Truiseil Standing Stone

More bed and breakfasts near Clach an Truiseil Standing Stone