HERITAGE HIGHLIGHTS:   One of the last lighthouses in Scotland to be automated 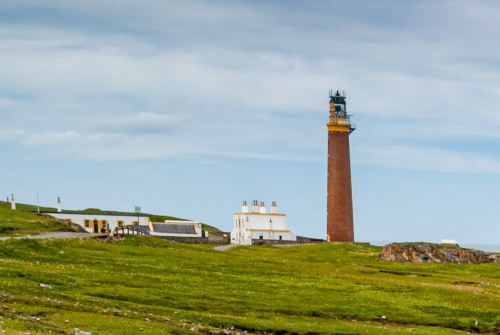 The Butt of Lewis is the most northerly point on the mainland of the Isle of Lewis, in Scotland's rugged and beautiful Western Isles. Rising above the rocky headland is an iconic 19th-century lighthouse, designed by David and Thomas Stevenson of the famous Stevenson family of engineers.

The lighthouse was built in 1862 and is operated by the Northern Lighthouse Board. The idea for a lighthouse on the tip of Lewis goes back much further, however. The only surprise is that it took so long to erect a lighthouse on this headland, given the area's reputation for storms.

In 1859 the firm of John Barr & Company of Ardrossan submitted a bid to the Board of Â£4,900 to build a lighthouse the Stevensons'design. Work was slow to begin, however, in part because a ship bringing the Barr's construction equipment to Lewis was wrecked whilst attempting to land. Work did not begin in earnest until the spring of 1860 and the light was first lit in 1862. 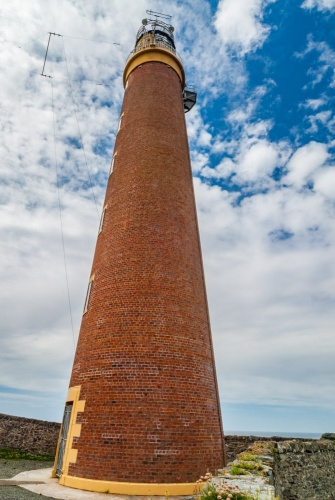 Looking up from the lighthouse base

The Stevensons' design called for a flashing light, but the Department of Trade rejected this idea in favour of a fixed light. It was not until 1903 that the light at the Butt of Lewis was changed to a flashing signal every twenty seconds.

Until 1869 the light was fuelled by fish oil or vegetable oil. After that date, the light used paraffin until 1976 when it was finally phased out in favour of electricity. 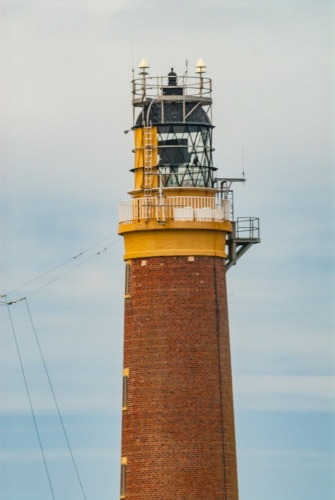 The gallery and lantern

The lighthouse keepers not only had to keep the light operational, but they were also charged with keeping meticulous notes on weather conditions. The keepers had to record conditions every hour and pass the data on to the Met Office.

Until the 1960s roads in the northern part of Lewis were so bad (or non-existent) that supplies for the lighthouse keepers were brought by boat. Cargo ships would land at Port Stoth, where you can still see remnants of the dock including the base of a metal crane and a storage shed made of the same red brick as the lighthouse itself. 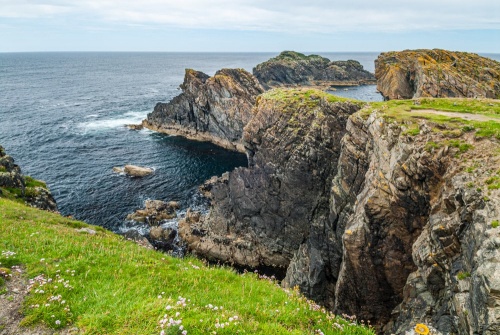 The rocky coastline at Butt of Lewis

The Butt of Lewis lighthouse stands 37m high and has 168 internal steps leading from ground level to the light chamber. In 1998 it became one of the last three lighthouses in the UK to be automated. The lighthouse tower is made of unpainted red brick, a rarity for Stevenson lighthouses, with yellow stone trim around door and window openings. The light can be seen for 25 nautical miles out to sea.

The Butt of Lewis is known as the windiest place in Britain, and the high winds can send water spray cascading over the top of the tower during heavy storms.

Huddled at the base of the tower are auxiliary buildings that originally served as accommodation for the three residential lighthouse keepers and their families. From the 1930s until 1971 the keepers served as radio contacts for the isolated lighthouse on the Flannan Islands, 20 miles to the west. 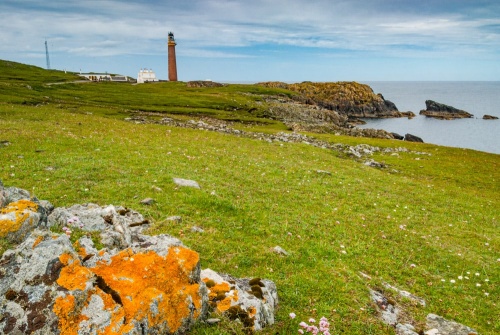 The lighthouse from the south

The Flannan Isles Lighthouse was the scene of an unsolved historical mystery in 1900 when the three lighthouse keepers disappeared without a trace, leaving behind a freshly prepared meal on the table. In a scene reminiscent of the infamous Mary Celeste mystery, the keepers were never found and no one can be sure how or why they disappeared.

Today, the light is provided by a two-tier system of LED marine lanterns that flash synchronously, and the lights are monitored remotely from the Northern Lighthouse Board's headquarters in Edinburgh. The lights now flash white every five seconds and are visible for 21 nautical miles.

Protecting the front entrance to the Butt of Lewis lighthouse complex is a low wall of red brick known as the Legacy Wall. The wall is made up of 250 red bricks, each purchased by a donor and inscribed with the donor's name. The money raised by donations helped fund a restoration project. The Legacy Wall was launched by Comunn Eachdraidh Nis, the Ness Historical Society.

From Europie (Eoropaidh) a minor road heads north to the Butt of Lewis (signposted Rubha Robhanais). There is a paved parking area directly in front of the lighthouse complex and plenty of space to park along the verge as well.

Nearby accommodation is calculated 'as the crow flies' from Butt of Lewis Lighthouse. 'Nearest' may involve a long drive up and down glens or, if you are near the coast, may include a ferry ride! Please check the property map to make sure the location is right for you.

More self catering near Butt of Lewis Lighthouse

More bed and breakfasts near Butt of Lewis Lighthouse