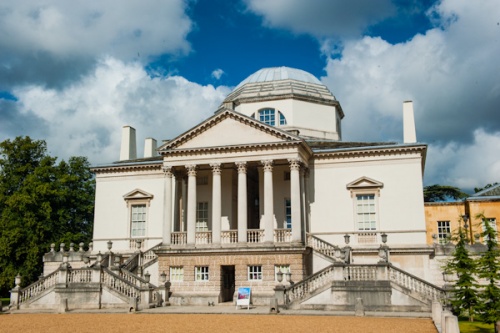 Chiswick House is an early 18th-century Palladian mansion built by the 3rd Earl of Burlington. The opulent interiors include Red, Blue, and Green velvet rooms, and a Gallery with a gilded ceiling. The house is set in superb landscape gardens with classical follies, statues, and some of the earliest water features in England.

Richard Boyle, 3rd Earl of Burlington, was one of the most influential figures in 18th century English art, architecture, and landscape gardening. Yet, you won't find his name mentioned in books of art, or see his paintings hung in the National Gallery.

Boyle succeeded to his title in 1704, at the age of 10, but it was not until he came of age in 1715 that he was able to put into practise his growing fascination with classical art and architecture on a grand scale. By happy coincidence, 1715 also saw the publication of two incredibly influential books, an English translation of Andrea Palladio's books on architecture, and Colen Campbell's Vitruvius Britannicus.

Palladio was a 16th century Italian architect whose works hearkened back to the architecture of ancient Greece and Rome, and his building style would influence the neo-classical movement that would shape many of the most opulent country houses in England. Campbell's work was more practical; it was a book of engravings showing British buildings that utilised a classical style. 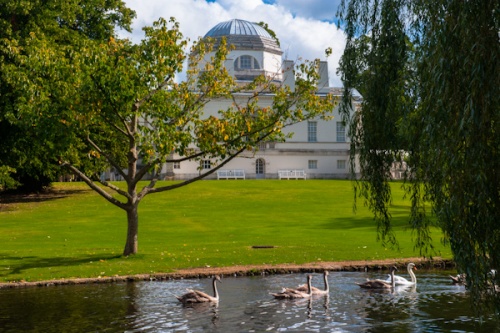 Lord Burlington was so struck by Campbell's work that he immediately hired the Scottish architect to renovate his townhouse; Burlington House, in Piccadilly. Then he set off for Italy to study Palladio's works in person.

When he returned to London, Burlington launched himself into a new project, creating a neo-classical villa in Chiswick, in what was then a rural retreat from busy London life. There was already a 17th century house at Chiswick but Lord Burlington had something totally different in mind, and something strikingly 'un-English'.

He did something unusual to implement his ideas; he did not hire an architect, but acted as his own architect, using original drawings by Palladio as inspiration.

Chiswick House was modelled after Palladio's Villa Capra, in Vicenza, but Lord Burlington did not simply copy the Italian villa designed by Palladio; he borrowed elements from numerous Roman classical locations and more modern 16th century buildings. For example, the shallow dome is modelled after the Pantheon in Rome.

The house was built over the years 1727-29, and three years later a passage was built to link the new house to the older 17th century building. 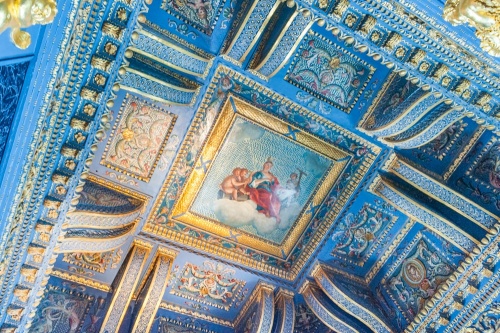 What was Chiswick House?

Well, we're on shaky ground trying to answer that question. It wasn't a residence; though there is a wine cellar, there is no kitchen. So perhaps it was simply intended as a space for entertaining, or perhaps a private library. There is a bedchamber, and spacious rooms on the ground floor that would have held large numbers of guests.

On the garden front are three interlinked rooms, one circular, another rectangular with apses, and the third octagonal. On the western side of the house is a picture gallery, and a pair of rooms designed to show off the finest works in Lord Burlington's art and sculpture collection.

One final addition was added in 1735 when a Summer Parlour for Lady Burlington was inserted in the old house. In 1788 the remainder of that old house was pulled down by the 5th Duke of Devonshire, who acquired Chiswick through marriage. Thankfully the Duke kept his hands off Lord Burlington's villa. 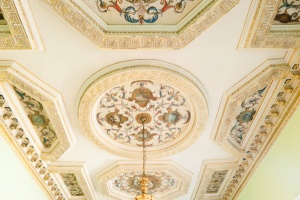 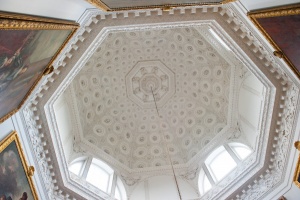 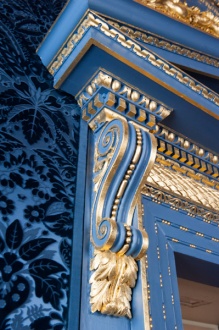 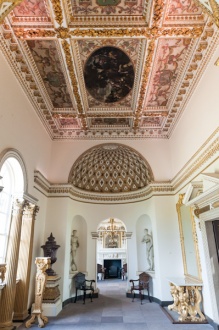 Chiswick is much more than the exquisite Italianate house, however, for Lord Burlington did not limit his vision of neo-classical art to buildings. The house is set in extraordinary landscape gardens; gardens that were to prove the inspiration for the English landscape garden movement.

Burlington was inspired by gardens of antiquity; or at least 16th century Italian interpretation of what classical Roman gardens would have looked like. Here we have a landscape of symbolism; nothing is 'just' a sculpture or a decorative element; everything represents something, an ideal, a vision. There are small statues of sphinxes, oddly Egyptian obelisks, and statues of ancient worthies strategically placed in an arrangement of avenues and sweeping curves.

One of the most fascinating garden features is the Obelisk Pond, with a classical temple at the centre of the circular Orange Tree Garden. Near the temple is the Classic Bridge, designed by James Wyatt for the 5th Duke of Devonshire in 1774. In 1728 Lord Burlington bought the neighbouring estate of Sutton Court, separated from Chiswick House by a long, straight canal called Bollo Brook. 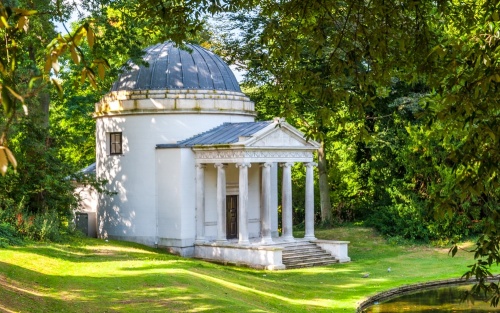 Burlington altered the course of the canal to make it more sinuous. This is probably the very first purpose-built irregular water feature in an English garden. The concept would later be used in almost every major country house garden and large public park; the most famous example is probably the Serpentine in Hyde Park.

Lord Burlington later called on garden architect William Kent to work on his ever-expanding gardens. In 1738 Kent designed the cascade, the first example in England of a garden element intentionally designed to resemble a ruin. Kent may also be responsible for the semi-circular Excedra, a curving hedge punctuated by statues of Caesar, Cicero, and Pompey.

Other garden highlights include a Doric column, designed by Lord Burlington himself around 1720 with a statue of the Venus de Medici on top of a slender column. The column originally stood at the heart of a series of radiating paths, but these were destroyed by the 5th Duke of Devonshire, who planted a rose garden around the column.

Another feature is a gateway, thought to have been designed by Inigo Jones for Beaufort House in Chelsea in 1621. When Hans Sloane tore down the house in 1738 Lord Burlington acquired the gate and had it brought piecemeal to Chiswick, where it was reassembled.

The result was an extraordinary garden mixing formal and informal to create something completely new. It is impossible to overstate the influence of the gardens at Chiswick. Almost every landscape garden in England owes a debt to Lord Burlington's vision; and the considerable wealth that enabled him to implement his vision! 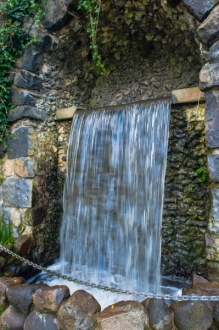 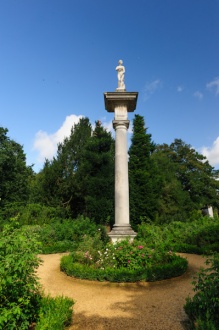 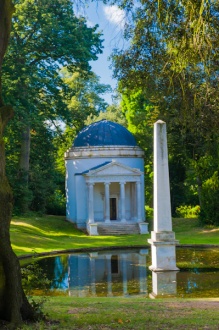 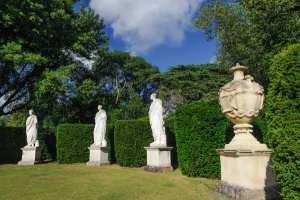 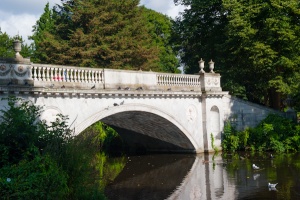 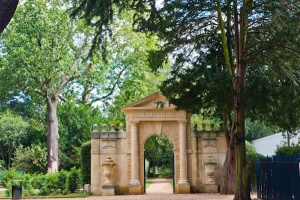 I had read about Chiswick House and was keen to see the house and gardens that had done so much to influence English country house and garden designs that I'd enjoyed elsewhere. My goodness, to say I was impressed is an understatement. We were fortunate enough to visit on a sunny summer morning, when we could stroll in the gardens at our leisure and enjoy the sudden vistas that opened out unexpectedly.

It is quite extraordinary how much Chiswick House feels like a country estate; somehow the hustle and bustle of London feels a hundred miles away. There is an extraordinary sense of peace throughout the gardens, and that peace is only amplified inside the exquisite house. Though parts of Chiswick House are opulently furnished, many rooms are almost plain, so that your eye is led through areas of light and shadow like you're walking through a gigantic work of art. Maybe that's what Lord Burlington intended?

The house is filled with wonderful art and sculpture, but it is not a museum, and you are not overwhelmed by lavish furnishings as in some stately homes. The house itself is the star of the show, and what a star it is. I loved Chiswick House. If you enjoy 18th century art, architecture, or landscape gardens, you will be fascinated by this wonderful historic house and its exceptional garden landscape.

Garden: Semi-classical gardens created by William Kent in 1729 to complement the Palladian house of Lord Burlington. Major features include a conservatory, parterre filled with bedding plants, and an Italian garden. A lake is surrounded by informal woodlands, with vistas strewn with monuments and statues. Best in: autumn and winter, but worthwhile all year. 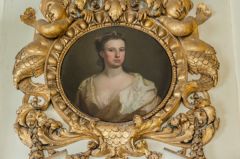 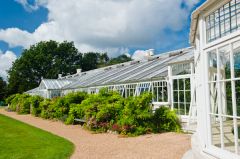 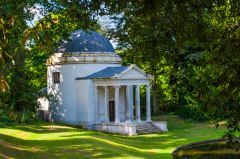 More self catering near Chiswick House >>