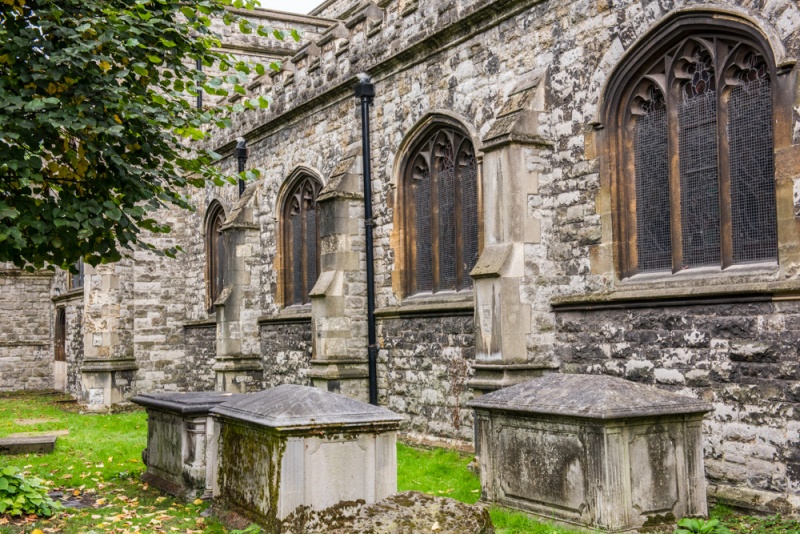 Sometime in the 8th century the Bishops of London established an estate at Fulham, well to the west of the historic City of London. A copy in the archives of St Paul's Cathedral shows that in AD 704 Waldhere, Bishop of London, ought an estate here on the north bank of the Thames from Bishop Tyrhtilus. Fulham Palace was built to serve as a summer residence for the Bishop of London. 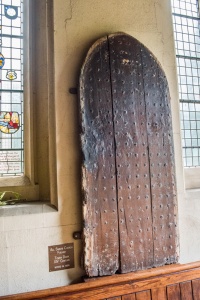 The close links between the church and nearby Palace meant that All Saints had both a rector and a vicar, though both posts were usually held by the same person. Eleven Bishops of London are buried in the church or the surrounding graveyard.

There are no written records of a church here before the 12th century. Even the Domesday Book of 1086 does not list a church, but this is true of all places in Middlesex. The first written record is an oblique reference in 1242 to a priest of Fulham being presented by King Henry III. Nothing remains of that early medieval church, which may have been destroyed during the violence surrounding the Peasant's Revolt of 1381, when Fulham Palace was ransacked by an angry mob and its records destroyed.

The rectory, or parsonage for All Saints was established at what is now Parson's Green.

Most of the present church dates to a complete rebuilding sometime before 1434, though the lower part of the west tower dates to the 14th century. The base of the tower was used to house the earliest school in Fulham. In 1630 a Dr Edwards gave money to erect a school room for village children over the porch. During the Civil War, Parliamentary soldiers stabled their horses in the church.

The tower rises in 5 stages to a height of 96 feet. All Saints is known for its ring of bells, which are thought to resemble the famous bells at Magdalen College, Oxford. In 1549 it was recorded that the church had 6 bells. Two more were added in 1729. The new bells were brought from Gloucester on a barge, which sank in the river opposite the church. The bells were salvaged from the river bed. Two final bells were added in 1740, for a total of 10. 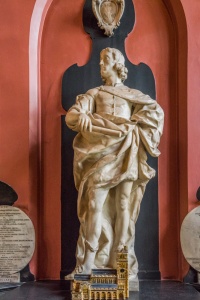 Aside from the tower, the church is primarily Victorian. The building was enlarged in 1840, but just 40 years later it was decided to rebuild the entire church again. The entire building was pulled down in 1880, with the exception of the tower. The architect of the new church was Sir Arthur Blomfield, son of Bishop Blomfield.

Thankfully, Blomfield reused much of the medieval stonework and preserved many historic monuments from the medieval church, including the 11 Bishops of London, who were buried here over the centuries.

The oldest memorial is a Flemish brass dated to 1529. This brass, commemorating Margaret Sanders, was probably buried during the Civil War and only rediscovered in 1770. Sanders was the wife of a famous painter named Gerard Hornebolt of Ghent. He served as court painter to Henry VIII as did his son Lucas. Their daughter Susanna, also a painter, married John Parker of Fulham, Keeper of the King's Wardrobe. Together the Hornebolts helped popularize the fashion of painted miniatures in Britain.

Almost as old is a memorial to Sir William Butts (d, 1545), who served as a physician to Henry VIII and helped found the Royal College of Physicians. Butt's epitaph was composed by Sir John Cheke, tutor to Edward VI. Butt appeared in Shakespeare's play Henry VIII (Act V Scene 2).

Look for a touching marble and wood memorial to Elizabeth Limpany, who died in 1694 at the age of 3. Another 17th-century monument is to Lady Dorothy Clarke (d. 1695). She was the wife of Charles II's Secretary of War, who was killed in a sea battle against the Dutch. The monument was carved by Grinling Gibbons at a cost of £300. 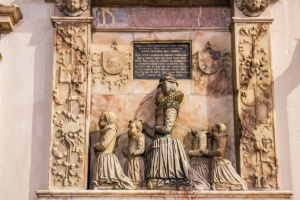 In the north transept is a monument to Katherine Hart (d. 1605). She was related to Sir William Powell, who built the almshouses just outside the churchyard.

In the sanctuary is a large monument to Lady Margaret Legh (d. 1603). She married Sir Peter Legh of Cheshire at the age of 16, and had 9 children before dying at the age of 33. Her poignant memorial shows her holding two babies in swaddling clothes, representing two of her children who died as infants. Another 17th-century memorial is to William Payne (d. 1626) and his wife Jane (d. 1610). The couple is shown in a typical Jacobean pose, kneeling and facing each other.

One fascinating piece of history is a memorial to William Carlos, whose father hid the future Charles II in an oak at Boscobel House after the Battle of Worcester in 1651.

A more modern memorial is a striking blue and gold ceramic plaque to General Alfred Bassano (d. 1882) who served at the siege of Lucknow during the Indian Mutiny in 1857. The organ dates to 1732 and was made by the Jordan company. The organist's seat is made with wood from the medieval pulpit. Unusually there are three fonts; near the entrance is an octagonal marble font made in 1622, near the chancel is a medieval font, while a second medieval font stands in the churchyard near the war memorial.

All Saints forms half of a unique double-act with St Mary's Church in Putney, across the River Thames. Putney Bridge is the only bridge in Britain with a church at both ends.

We mentioned the 11 Bishops of London buried in All Saints. Their tombs can be found just outside the east end of the church. Aside from the Bishops buried here there are also two Mayors of London and the 1st Viscount Mordaunt (d. 1675). Mordaunt was a Royalist cavalier, who had several narrow escapes from death during the Civil War and was appointed Warden of Windsor Castle by Charles II after the Restoration of the Monarchy.

The west tower and porch holds heraldic glass, including an ancient coat of arms to Sheene Priory. The font is from 1622, and on the wall of the parch is a worn 14th century oak doorway from the medieval church. Outside the vestry door is the grave of Henry Holland, the architect.

All Saints is on the Thames Path, immediately outside the gates of Fulham Palace Park. The closest underground station is Putney Bridge, about five minutes away. Just exit the station, turn left, and left again, following the Thames Path signs. Turn right at the river and follow the signposted trail until you see the church ahead of you. The church was open when we visited on a Wednesday afternoon, and as far as we can determine is usually open to visitors during daylight hours. 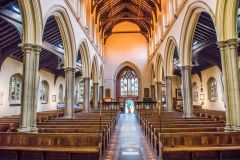 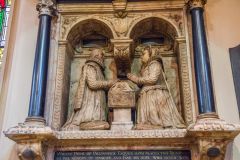 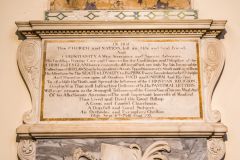 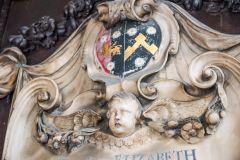 More self catering near Fulham, All Saints Church

More bed and breakfasts near Fulham, All Saints Church