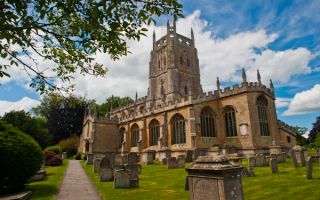 Fairford, St Mary's Church
Without doubt one of the best 'wool churches' in England, St Mary's, Fairford, is a testament to the wealth of the medieval wool trade in the Cotswolds region. Successful wool merchants lavished money on their parish churches, and if we can judge by the results at Fairford, the local merchants were very wealthy indeed.
St Mary's is a superb example of Perpendicular style, and possesses what is probably the most complete set of medieval stained glass in Britain.

History
There was a church here as early as the 11th century, but the earliest parts of the current building are 13th-century foundations in the northeast corner and in the lowest parts of the central tower. The early medieval church was completely rebuilt around 1490 at the expense of John Tame, a wealthy wool merchant. Tame sought permission from the Diocese of Worcester to pull down the earlier church, with the exception of the 14th century tower. The tower remained as part of the new church, though it was raised in height with exquisitely carved corner turrets, and butressed to take the extra weight.

Tame died in 1500 and is commemorated by a very fine table tomb and brass in the Lady Chapel. He lived long enough, however, to see 'his' church dedicated in 1497. The glass for which St Mary's is famous was installed under Tame's son Edmund, who took over the building project on his father's death. Edmund Tame also had beautifully carved screens installed. 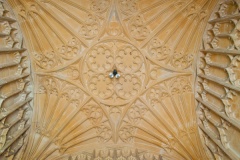 Vaulting in the porch
THE STAINED GLASS
St Mary's possesses the only complete set of medieval stained glass in England. Other churches have superb glass, but at Fairford the complete original glass is still in place, as it was set there over 500 years ago. Only one small section of the west window had to be replaced in 1864.

And what superb glass it is!

There are 28 windows, arranged in sequence to tell Biblical stories to a largely illiterate population. There is a sequence of 9 windows telling the Life of Christ, beginning by the organ, and culminating at the Great West Window, which depicts the Last Judgement.

How did the glass survive the turmoil of the Reformation? Idolatrous images were outlawed, and many superb works of medieval art, including carvings on stone and wood, and stained glass images, were defaced, broken up, or completely destroyed. How, then did Fairford's glass remain untouched? We don't know, but various theories have been put forward. Perhaps the glass was whitewashed, or at least images of saints painted over. That seems somewhat unlikely. Much more plausible is that the glass was protected by a local person of great influence and wealth.

In 1703 a great storm smashed the west window. The pieces were put back together with the best of intentions, but the result was haphazard. Then in 1864 the Chance Brothers firm of Smethwick was called in for repairs of the top part of the window. Rather than repair it, they replaced the medieval glass, to general consternation. The glass was carefully removed during WWII and stored at Fairford Park.

We think we know who paid for the glass, but who actually made it? We know that, too, for the glass was made under the direction of the king's own glazier, Barnard Flower, who had a workshop at Westminster in London. Flower came from the Low Countries, as did many of his workmen.

But if Flower and his workmen made the stained glass, who actually designed the overall scheme? The answer is probably Richard Fox, Bishop of Durham and Lord Privy Seal.

The Fairford Stained Glass Windows
The window scheme is as follows:

Window 1 - The Old Testament: we see Eve taking the fruit, the story of the burning bush, Solomon and Sheba, and the story of Gideon and the Fleece. 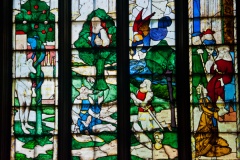 Window 2 - The Virgin Mary: scenes from Mary's life, including her birth, Mary presented at the Temple, and the betrothal of Mary and Joseph. 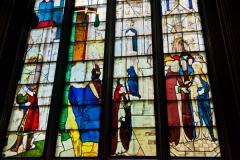 Window 3 - The Birth of Christ: The Annunciation, Nativity, Adoration of the Magi, Christ presented at the Temple. 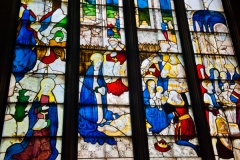 Window 4 - The Christ Child (no photo)

Window 5 - The Passion: 5 panels above the transom  including the Flight into Egypt, Assumption, and Christ debating with the Doctors in the Temple. Below the transom are 5 more panels with the entrance to Jerusalem, Garden of Gethsemane, Pilate washing his hands, scourging of Christ, and the Via Dolorosa. 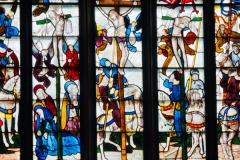 Window 6 - Deposition, Entombment, and Harrowing: 3 panels including the descent from the cross, entombment of Christ's body, and a very vivid Harrowing of Hell, 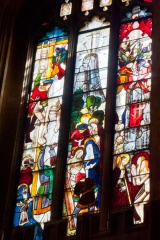 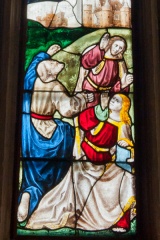 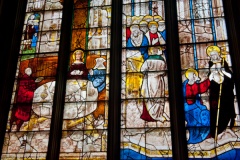 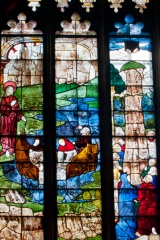 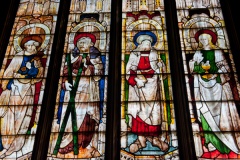 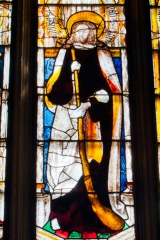 Window 14 - The Judgement Hall of David: the main scene shows the beheaded body of The Amalekite 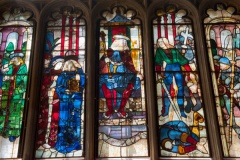 Window 15 (The Great West Window) - The Last Judgement: an astonishing window, even though the top section is a Victorian replacement, the lower section is simply exquisite; one of the highlights of medieval art in Britain. In the centre is St Michael with scales, weighing souls. To left St Peter helps the saved ascend stairs to heaven. To the right are souls descending to hell, where torments await them. Satan waits in the lower right. He is shown with a torso like a head, a fish head, and a green tail. Look to the lower left, where a figure with ringlets is led into heaven. This is thought to depict Henry VII. 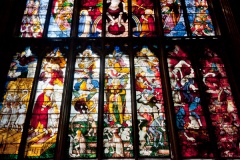 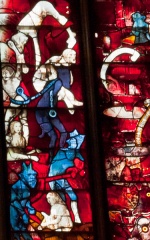 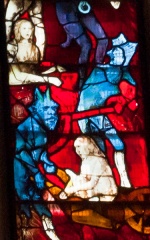 
Window 16 - King Solomon's Judgement Hall: the familiar story of Solomon threatening to cleave a baby in two, with two women each pleading to be declared the child's mother. 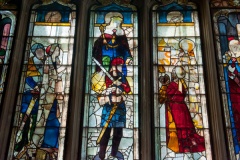 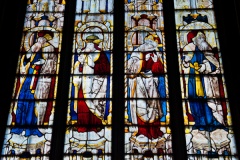 
Windows 21-24 - Twelve Martyrs and Confessors of Faith (no photo)

HIDDEN PORTRAITS
(all window numbers refer to numbering used in the official church guide)
Scattered amid the Biblical scenes in the stained glass are a wealth of small portraits of rich and influential people, particularly members of Henry VII's royal court. In Window 1 the Queen of Sheba is given the likeness of Elizabeth of York, queen to Henry VII. Window 3 has three royal likenesses; the Virgin Mary is modelled after Catherine of Aragon, a magus looks like Prince Arthur, Catherine's first husband, and an attendant with doves is modelled on Margaret Tudor, later married to James IV of Scotland.

In Window 4 the figure of Jesus in the Temple may be Prince Henry, later Henry VIII, and in Window 7 the third Mary is likely Princess Mary, third daughter of Henry VII. Windows 10, 11, and 12 use the ostrich feather symbol associated with Prince Arthur and probably celebrate his marriage to Catherine of Aragon. In Window 15 a king entering the Gates of Heaven is portrayed as Henry VII himself. 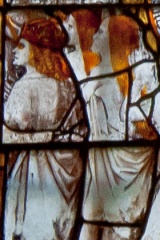 Above the figure of Solomon in Window 16 is the Sun in Splendour badge of the House of York, and Solomon himself may be Prince Edward, eldest son of Edward IV and one of the two Princes in the Tower. In the transom of the same window is a portrait of Cardinal Wolsey, and in Window 17 is a likeness of Bishop Richard Fox, who worked with the royal glazier in the design of glass at King's College Chapel, Cambridge. In Window 23 is a figure with a crown, orb and sceptre thought to represent Henry VI. 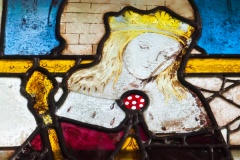 Why all the royal likenesses? One possibility is that the glass at Fairford was the gift of Henry VII himself. For Henry had executed Edward, Earl of Warwick, and seized his estates, which included Fairford. Was the stained glass a statement of ownership, asserting the royal claim to the Duke's lands? 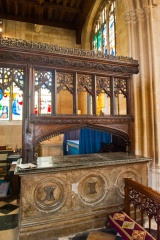 St Mary's is a marvel, a testament to late medieval Tudor craftsmanship. The stained glass is worth making a special trip to see. I highly recommend getting a special guide to the glass; you'll get so much more out of it if you know the symbolic meaning hidden in the glass.

Outside the church, look for the carved figures on the tower and around the roofline, including a Christ in Pity and the Bear and Ragged staff symbol of Warwick. Just outside the south porch you will see a whimsical gravestone to a church cat named Tiddles. 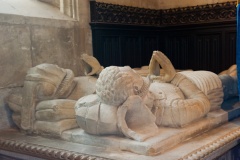 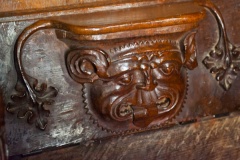 Misericord of a beast 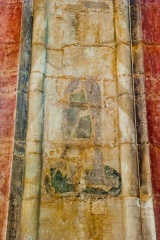 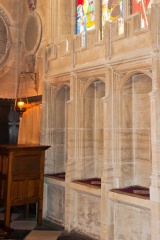