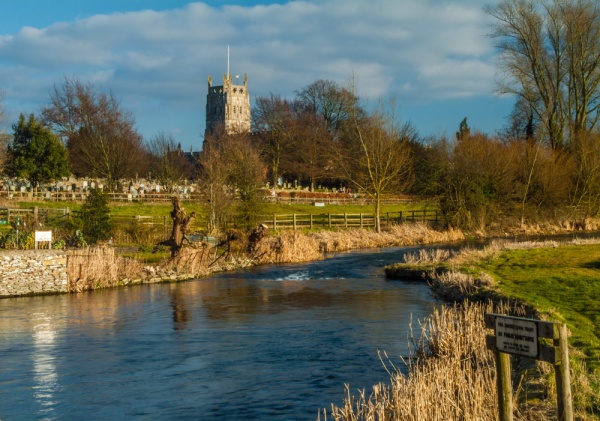 The River Coln at Fairford

A picturesque Cotswold town graced by one of the most striking "wool churches" in the region.

It is easy to overuse the adjective "lovely" to describe Cotswold towns and villages, but Fairford surely qualifies for such a description. The town is rather stretched out, the oldest section and most of the shops being near the church, with residential areas spreading to the west and south.

There are some, er, lovely walks to be had along the River Coln, where swans float placidly. There is a heritage trail, which starts near the church, and takes in many historic buildings, of which Fairford has quite a few! 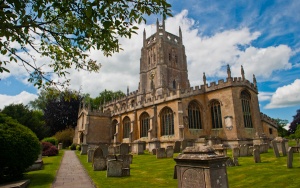 Fairford grew up around a crossing of the Coln. The roots of the town name indicate this heritage, coming from the Saxon for "easy ford", or "good crossing". The first historical mention of Fairford dates to 850AD, but the area was settled as far back as the Bronze Age.

The need for the "ford" disappeared in the 13th century when the bridge across the Coln was built. By that time Fairford had become an important regional centre, as evidenced by the market charter granted it in 1135.

The heyday of Fairford was the late Middle Ages, when the wool trade was at its height. The superb church of St Mary's is the best surviving evidence of this prosperity. More on the church in a moment.

Of the historic buildings, mention must be made of the Bull Hotel, a former coaching inn which dates to the 16th century, and the Old Mill, a comparative newcomer built in the 17th century. The Domesday Book makes mention of a mill, which may have stood on this same spot. 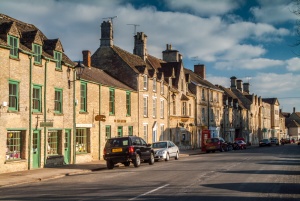 Fairford used to host a pair of popular annual events; a Steam Rally and the Fairford International Air Show. The air show is still running and just as popular as ever, but unfortunately, the Steam Rally ceased in 2015.

The first glimpse of St Mary's, Fairford, rising above low pasture land to the west is likely to make unsuspecting visitors stop in their tracks and stare (as this writer did). The ornamentation of the tower is reminiscent of lace, so extravagant is the stonework.

The magnificence of the carving may seem out of place in this quiet market town, but it gives a fascinating glimpse at what life must have been like when the wool brought prosperity to this region. St Mary's Fairford is unique in that it possesses the most complete set of pre-Reformation stained glass in the country.

As a final, whimsical, touch, look for the carved effigy of a pet cat just outside the main entry (see our Fairford Photo Gallery for a picture). This is Tiddles, and if Fairford can be said to have an unofficial mascot, Tiddles must surely qualify!

More self catering near Fairford

More bed and breakfasts near Fairford